Cookbooks in the Pantry: The Soup Peddler's Slow and Difficult Soups 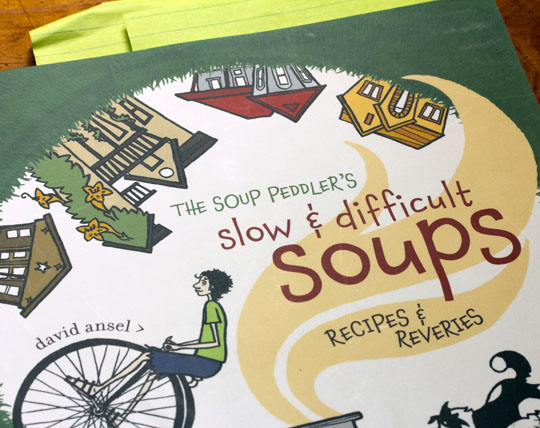 When we moved from log house to city apartment, I downsized my large cookbook collection, and kept fewer than 100 cookbooks. What made the cut, and why?

Why I've kept it: When my spirit is in need of lifting, I make soup, and when I'm feeling particularly low, I open The Soup Peddler's Slow & Difficult Soups and read a random chapter while my soup burbles in the pot. And I feel restored. And because I want you to feel restored, too, please indulge while I share this passage from the book's introduction:

This book is about...how the mundane aspects of life, such as food and work, can be utterly consuming and rewarding, as long as they are humbly infused with your spirit and creativity. It's about how, when you involve your neighbors and friends in this joie de vivre, your community becomes an inspired and inspiring place. Finally, it's about how sharing yourself in this way foments tikkum olam, the repair of the world, which is a hopeful, participatory theory unto which one must cleave when civilization appears to be in rapid decline.

Is this about our post-election world? Yes, although it was written 11 years ago. Is it about soup? Yes. It's also about why we make soup. It's a rather serious philosophical start to what is actually a very amusing and entertaining cookbook.

I have a soft spot in my heart for career changers, especially those who make lemonade from lemons, and even more so when that "lemonade" is really soup. David Ansel lost his job in tech, and almost on a lark turned himself into The Soup Peddler, delivering his unusual homemade soups by bicycle to clients in Austin, Texas.

He collected soup recipes from family and friends and neighbors. Each recipe in the book comes with a story, and the stories will make you laugh and laugh. The soups will make you happy, like the bouktouf I made for the first time, following exactly the directions in the recipe. I've also made his shorbat rumman, a version of yellow split pea soup with tons of fresh herbs, and avgolemono soupa, about which Ansel writes, "If bouktouf is the Mickey Mantle of soups, then avgolemono, if you'll humor me, is the Eddie Murray of soups." (A baseball reference. Really.)

The Soup Peddler's Slow & Difficult Soups is out of print, but easy to find online or in stores that stock used cookbooks.

Do you have The Soup Peddler's Slow & Difficult Soups on your cookbook shelf?

I love this book! I bought it after hearing about it on some NPR show -maybe Splendid Table? The first soup I tried was Armenian Apricot Soup (which I made with pears instead of apricots) -- excellent. As you imply, this is a book worth reading. He's a great storyteller.

Soup, what a good idea - thanks for the reminder! I have been in a funk since the election. I do have this book, after reading what you wrote about it years ago! I need to re-visit it now.

Slow and difficult sounds right up my alley, and who doesn't love a really good soup. On your recommendation, I just ordered this cookbook and can't wait for it to arrive so I can get cooking and being entertained by David's stories. Like Judy, I am definitely in need of some post-election therapy!