The Perfect Pantry® turns 10, and a look back at our 10 favorite recipes 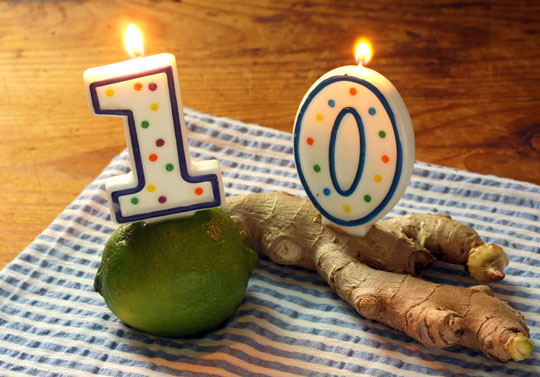 By now, if you're a regular reader of more than one food blog, you've read plenty of anniversary posts, celebrating one year, five years, and sometimes more. You've probably read some of those posts here, too. A few days ago, this blog turned 10, and the occasion calls for some words.

Ah, but what kind of words? Aspirational, or inspirational?

I considered telling the truth: I spend many hours writing blog posts in my pajamas while watching shelter shows on HGTV, which means I might be even better at home renovation now than I am at cooking.

Instead, I decided to look back through the archives, and as I did, I realized that not only has my blogging changed, but my cooking also has changed: simpler, less complicated, cleaner. I learned that I cook better in even-numbered years, though I can't explain why, and that, thankfully, my photography has improved a bit.

So, no great words of wisdom. I had fun looking back, and I hope you will, too, as we peek into the pantry to find the best recipes, year by year. Thank you for sharing this decade with me. I promise to stick around and keep cooking -- and if that doesn't work out, maybe I can rehab your house. 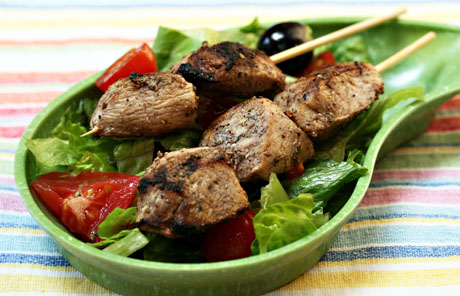 How cool is it that the very first recipe on the blog in June, 2006, was, and still is, one of our absolute and enduring favorites? Shish taouk (garlic chicken on skewers) kickstarted my food writing career, years before I'd ever heard of blogging. In fact, we love it so much that I reimagined it as a slow cooker dish in 2012. In 2006 I also shared my "house special" recipe for jambalaya, though I didn't photograph it until a few years later. 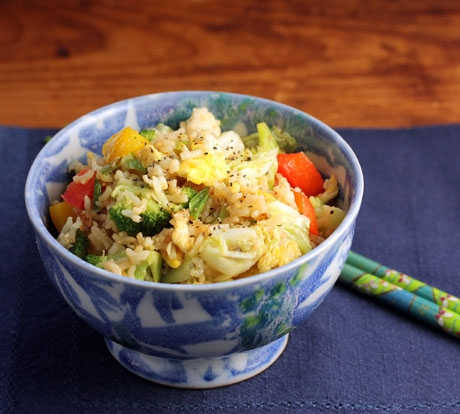 Vegetable fried rice made with brown rice, a recipe I first posted in 2007, demonstrates how my cooking began to change from the early days of the blog. By the time I updated and photographed the recipe in 2013, I'd already changed the proportion of rice to vegetable, and that's the way I make it today. 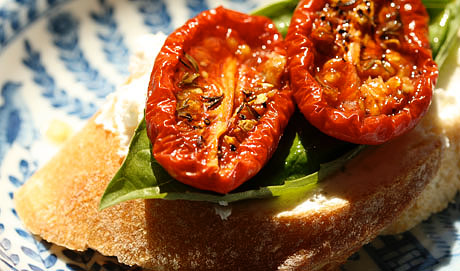 By 2008 we were peeking into Other People's Pantries all around the world. That kept us busy, which was good, because there wasn't a whole lot of interesting cooking going on. I did fall in love with slow-roasted tomatoes; bruschetta made with tomatoes and goat cheese is still my go-to appetizer, and I always have my own garlicky slow-roasted tomatoes in the freezer. That year I also shared a really good shrimp etoufee recipe, updated with photos in 2010. I don't make that often enough. 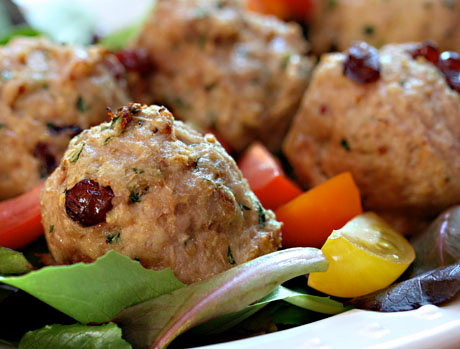 The year 2009 marked the start of what became a relentless march of turkey meatballs through The Perfect Pantry, so many meatballs that they ended up in a book. These turkey, cranberry and basil meatballs were the biggest crowd pleaser. And when my husband Ted and I tired of meatballs, we retreated to the comfort of my streamlined version of nasi goreng (Indonesian fried rice, made with kecap manis). 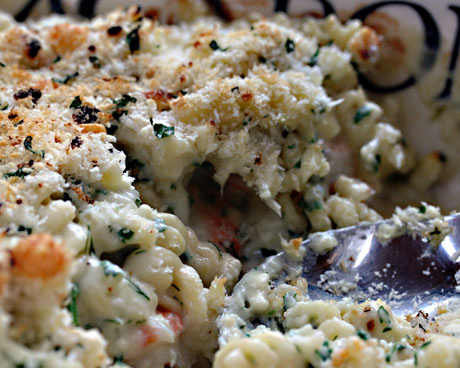 After all of those meatballs, much more variety found its way to The Perfect Pantry in 2010. In fact, it was an amazing year for creative new recipes, and it's been hard to choose the best ones. Ted provided the definitive answer, as his eyes lit up when I mentioned shrimp, lemon, herb and feta macaroni and cheese. I love turkey mole chili, which debuted on the blog in 2009, and watermelon gazpacho, which I make by the gallon every summer. I began to collect Bundt pans, for some odd reason as I'm definitely not a baker, and made this yogurt coffee cake with pecan filling, which is great to bake when friends come for tea. 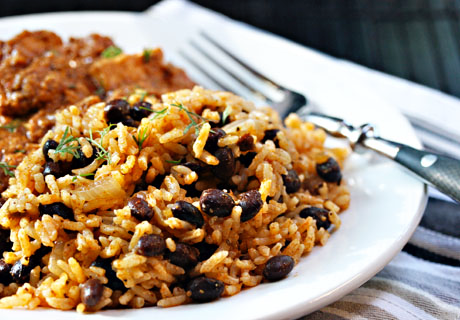 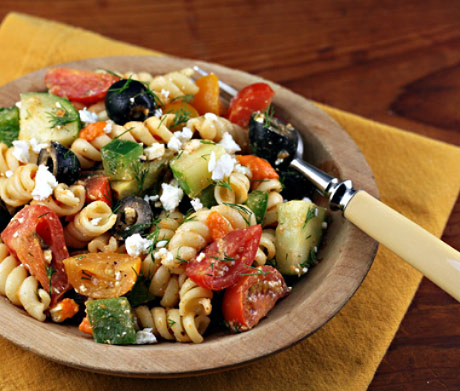 I'm mystified by the fact that 2012's Greek pasta salad with sun-dried tomato vinaigrette remains the all-time most popular recipe on the blog. It's very good, to be sure, but is it better than the same year's lobster, corn and basil quiche, or the grilled portobello mushroom and goat cheese sandwich with smoked pepper spread? 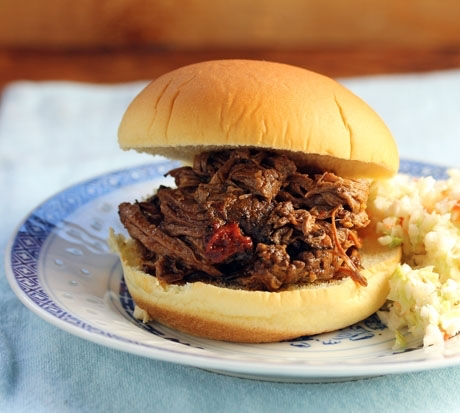 Many briskets gave their lives in 2013 for a slow cooker barbecue brisket recipe I worked on for weeks. It has everything: "burnt" ends, drippy goodness, smoky sauce. My local grocery store in Rhode Island proved to be a great source of boneless turkey breasts, and I put all of my favorite condiments into the marinade for this grilled Asian turkey breast with soy, garlic and chili paste. And 2013 was the year of Irish soda bread muffins, which we served first for Thanksgiving, and many times after that. 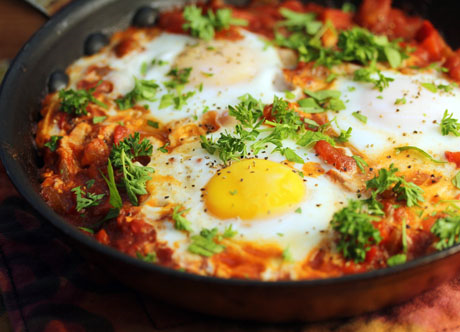 Another creative year in the kitchen, 2014 began with a trip to Costa Rica that inspired me to make shakshuka (not a Costa Rican dish, of course, so read the post to get the story) and also gallo pinto, the black beans and rice we ate every day, with every meal. In the slow cooker, I made a wonderful Caribbean pepper pot, and in the pressure cooker, shrimp and asparagus risotto. My family loved chicken and spaghetti squash casserole with bell peppers, olives and cheese, and warm Brussels sprouts, almond and goat cheese salad. In 2015, we ate our colors -- all of the colors -- in lighter recipes for confetti spaghetti squash with peppers, zucchini, lemon and capers, and Greek chicken chopped salad with creamy poppy seed dressing. I could eat either of these dishes every week. West African chicken mafé turned out to be one of the great entertaining dishes, so much so that I created a meatless West African vegetable stew in peanut sauce, too. 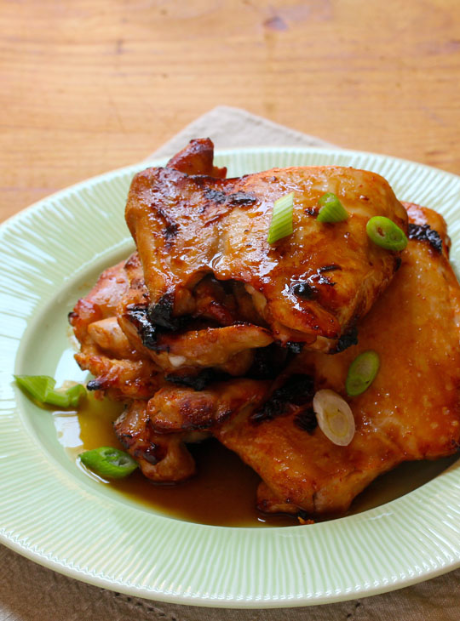 While it's too early in 2016 to choose a favorite recipe, the year is off to a good start. I can't imagine that spicy Sriracha grilled chicken won't be high on the list, and the irresistible Brazilian lambe-lambe (rice with mussels) will be there, too. Pressure cooker pozole verde beef stew, while perhaps not an authentic recipe, brought a bit of the Southwest into our kitchen. I'm learning how to work with my new grill, and there are some great recipes coming in the next few weeks.

I still look in my pantry for inspiration from around the world, and I hope you do, too. Let's keep cooking together. This year -- an even-numbered year -- should be a good one.

What a fun idea for an anniversary post! I remember a lot of those dishes, and every one sounds like a winner! And I am so glad you started blogging ten years ago, otherwise I doubt we would have ever run into each other on the internet without that connection. I am so glad we did!

Kalyn, the "club" of food bloggers who have made it to ten years is small, and I'll always be grateful that Kalyn's Kitchen was there a year before me, to show me the way. I doubt we'd ever have met in person if it were not for the blogs, but I am so glad we did, and that we have found much more common ground than just food!

Happy Blogaversary! Mine will be reaching 10 years at the end of August, and I agree that it's been an interesting journey through the years. Thank you for sharing yours.

Renee, thanks, and congratulations to you, too!

Donna, I love watching your blog evolve, too. One day we'll be celebrating the 10-year mark for Just One Donna!

What would I do without The Perfect Pantry? New pantry items, new ways to cook and eat... I remember my early days here, probably 2007. I started with 'today' and went backwards in moments of down time at work, until I had seen them all. You mention a few of my all time favorites (nasi goring, watermelon gazpacho), and others that I have to go back and revisit. The energy you put into this blog is stunning, and the results in my kitchen are rewarding! Thank you!

Susan, thank you so much. Over the years, I've followed many of your suggestions for adapting my recipes to meatless recipes, with wonderful results. I love your creative approach to cooking!

Although I was late to the party, I went backwards and over time read all your blog posts from the beginning. So many are not in my repertoire, as are many of your books, hard and electronic.
I still look forward to that little deposit in my e-mailbox telling me a new story awaits. I miss your being in Rhode Island, but happy that you are doing so well in Boston. And happy, too, that your sense of humor is still sharp. About those renovations....

Connie, you are so kind, thank you. I'm finding that cooking in my little Boston kitchen is a more solitary endeavor, because there really isn't room for two. But I'm having fun doing it. And I try never to be without a sense of humor about it all!

What a fantastic accomplishment! I know I've said this before, but will repeat it, I don't know how many of these years I've been following you, but definitely more than 7, because I started reading your blog before I started mine. So, I suppose I qualify as a "regular" and that makes me so happy!

Looking forward to more of your great articles! and of course, no matter what you blog about, we'll have plenty to discuss in politics and life in general over at Facebook (wink, wink)

Sally, you are definitely one of the most faithful readers of the blog from the early days, and I'm so grateful. I love reading your blog, too, and learn so much about Brazilian cooking there. (And yes, I'll be on Facebook, so I'll see you there!)

I remember making the turkey meatballs in your kitchen in Rhode Island. What fun. :) I think it's time for you to come and cook in my kitchen! Looking forward to another 10 years of reading your blog.

Janice, I'd love to come and cook with you!

I'm a little late to the party, but wanted to add my happy anniversary wishes! How quickly this decade has gone, but how tasty it has been! I do think your culinary journey within the Perfect Pantry shows how important it is to always experiment, and be open to new tastes and flavors. Here's to the continuing adventure!

TW, thanks so much. It has been fun to take a minute and look back. It makes me realize that this blog has made me a better cook, and a more adventurous one.