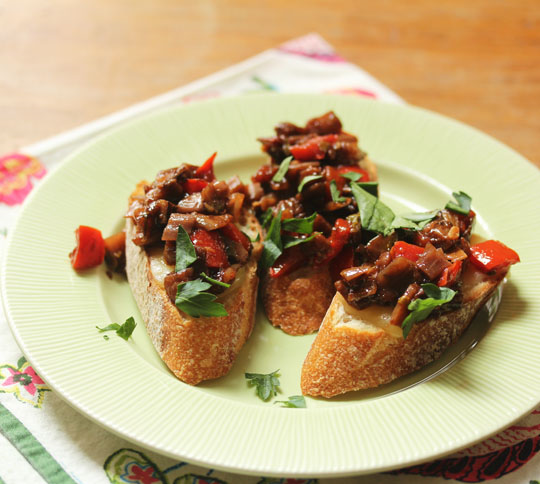 After living for 15 years in the log house in the woods, my husband Ted and I returned to our full-time home in Boston's South End to discover that restaurants, cafés, and food markets have grown up all around us. On our corner, the store that used to sell cigarettes and lottery tickets now boasts a huge wine cellar. My old greengrocer's storefront has morphed into a fromagerie. A below-ground space that once housed a men's gambling club now peddles pastries and organic salads. I love all of the changes, especially one that brought a tapas restaurant to the arts center across the street. The eggplant caponata, served as a warm tapa in the restaurant, makes a fine topping for toasts with some melted cheese; use something mild, like fontal or fontina, or something with a bit more bite, like manchego. Fresh mozzarella would work, too. The vinegary eggplant caponata has the slightest bit of a kick from red pepper flakes, which you could omit, though of course I'd urge you not to do that. Make this a few hours, or a few days, ahead. It would be perfect for a picnic. 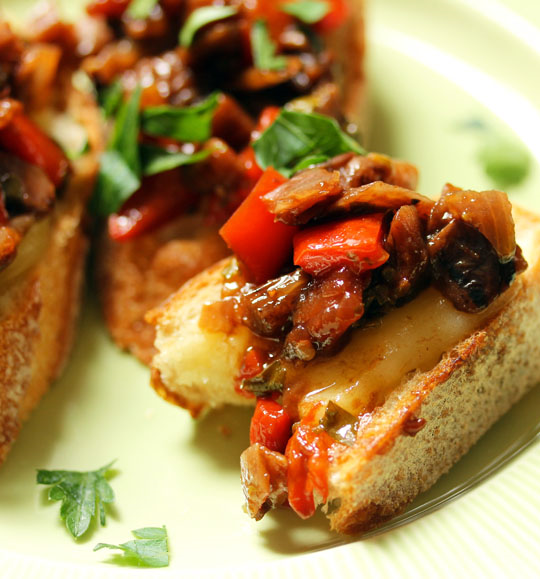 Caponata recipe adapted from Barcelona Wine Bar & Restaurant's recipe on In My Bowl.

Makes approximately 3 cups; can be halved, but it keeps well, so go ahead and make the whole recipe.

For the toasts:
1/2 lb sliced cheese of your choice: fontina, fontal, manchego, mozzarella
1 large baguette or other crusty bread, sliced thinly on a diagonal

In a very large nonstick frying pan, heat 2 teaspoons of olive oil over medium-high heat. Add as much of the eggplant to the pan as will fit in a single layer, and cook, stirring frequently, until the eggplant is very brown (almost burnt). Transfer the eggplant to a large mixing bowl, and repeat with remaining eggplant.

When all the eggplant is seared and removed from the pan, add the remaining olive oil, onions, peppers and garlic, and reduce the heat to medium-low. Sauté until soft (8-10 minutes).

While onions, pepper, and garlic are cooking, combine the tomatoes, vinegars, honey and red pepper flakes in a pot. Turn the heat to high, bring to a boil, and cook until the mixture is reduced by half, 3-4 minutes.

Add the eggplant back into the pan with the onions and peppers. Cook over low heat until the eggplant is cooked through; then add the tomato-vinegar mixture. Cook 5 minutes, until the mixture in the pan is thickened and most of the liquid has evaporated.

Taste and adjust seasoning with salt and pepper, or agave nectar, if necessary.

Remove pan from the heat and transfer to a serving bowl. Allow to cool to room temperature. Fold in the chopped basil and parsley.

Serve at room temperature, or chilled. Can be made up to 1 week ahead.

To assemble the toasts: Heat the oven to 400°F. Place the slices of bread in a single layer on a baking sheet. Toast for 5 minutes on one side.

Remove the baking sheet and flip the bread slices. Top each one with a piece of cheese, and return to the oven. Bake until the cheese has just begun to melt, then remove from the oven.

Spoon some caponata over each slice of bread, and serve.

All those wonderful flavors! We're caponata fans, especially when it's finally really summer and all those veggies are ripe and sweet. My husband is in charge of this one. He's put some off-book additions in, such as sweet potato - try it!

Susan, sweet potato sounds like a great addition, and for me that would make it almost a main dish on its own.

I can't wait to come to Boston and walk around that foodie neighborhood with you. This really sounds great!

Kalyn, wouldn't that be fun? I have so many great markets to show you.