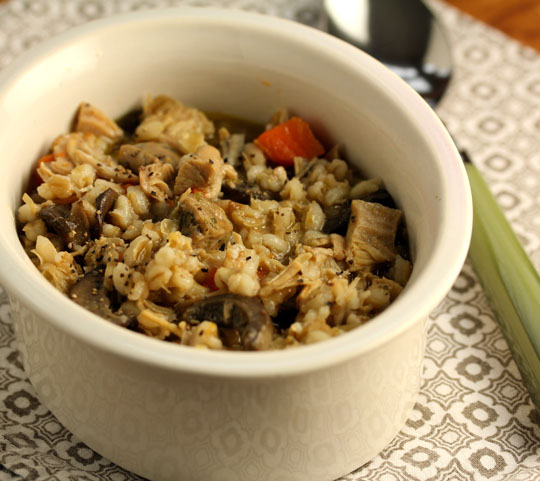 I know what you're thinking: this soup doesn't look very soupy, does it? Well, in real life, it's a soupy soup, but in the life of a food blogger who wants to show you the goodness swimming below the surface, and who removes a little too much of the broth to make sure the barley and other ingredients reveal themselves in the photographs, it's a bit hard to see that there is, in fact, really rich liquid binding everything together. Although you can surely make this soup in a Dutch oven on the stovetop, the pressure cooker, if you have one, does an exceptional job of pumping flavor into broths, and tenderizing grains. It's really a kind of double soup recipe. First, you make a chicken broth; then, use the meat from the broth to enrich the barley soup. This freezes well, so make a batch today, and save some for later. On the snowiest days of winter, you'll be glad to have some of this soup on hand for apres-shoveling lunches. 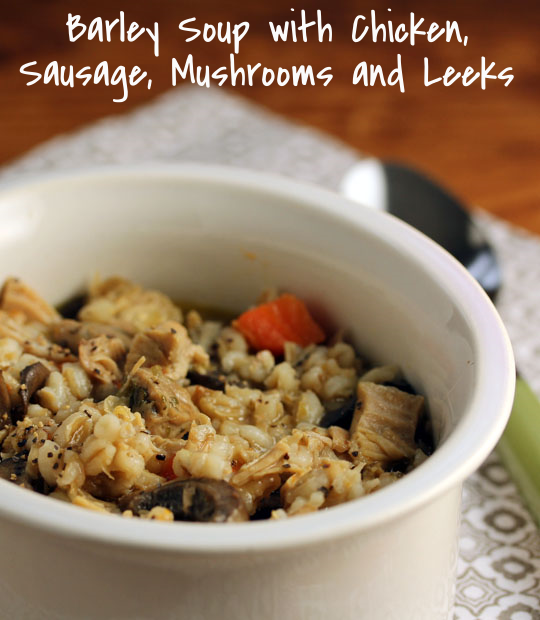 I use an electric pressure cooker; if you use a different type, you might need to adjust cook times.

In the pressure cooker, place all of the ingredients for the homemade chicken broth. Add 6 cups of water. Lock the top, and set the cooker to High Pressure for 20 minutes. Use Natural Pressure Release. When the pressure valve drops, carefully lift the cover of the pressure cooker, and remove the chicken pieces to a bowl. Discard the vegetables. Strain the broth into a large measuring cup or bowl, and set aside.

Wash and dry the pressure cooker.

Set the cooker to Browning, and add the 2 teaspoons of olive oil. When the oil is hot, add the chicken sausage, leek, celery, carrots and mushrooms. Cook, stirring frequently, until the onions are translucent and the mushrooms have given off some of their liquid, 3-4 minutes. Add the thyme, and stir until the mixture is fragrant (2-3 minutes). Add the barley and chicken broth. Turn off the cooker.

Lock the lid in place. Set the pressure cooker to High Pressure for 10 minutes. When the cooker beeps at the end of the cook time, use the Natural Pressure Release method, which will release the pressure in approximately 20 minutes.

When the pressure is released, open the lid carefully, and stir in the chopped chicken, soy sauce and black pepper. Pour the soup into individual serving bowls, and serve hot. Or, pack into freezer-safe containers. Let the soup cool completely before freezing.

Note: if you refrigerate or freeze the soup, you might need to add some water when you reheat it, as the barley will absorb most of the chicken broth.

I haven't made this kind of soup in the pressure cooker, but I am imagining how much flavor it will infuse into the barley. Must try it! And thanks for featuring my chicken-barley soup. I love barley in soup!

Kalyn, the pressure cooker works wonders with barley, so I hope you'll try it. I make my chicken stock this way all the time now, too.

Hi Lydia, I don't have a pressure cooker, but would like to make this soup. I can handle the first step for making the homemade chicken broth. How would you convert the 20 minutes of pressure cooker time for the soup to a dutch oven on the stove top? Thanks

Clara, the barley is the key factor in determining the time. It will take about 40 minutes to cook on the stovetop. I would cook the stock with the barley and aromatics first, and after the barley is completely cooked, add the remaining ingredients.