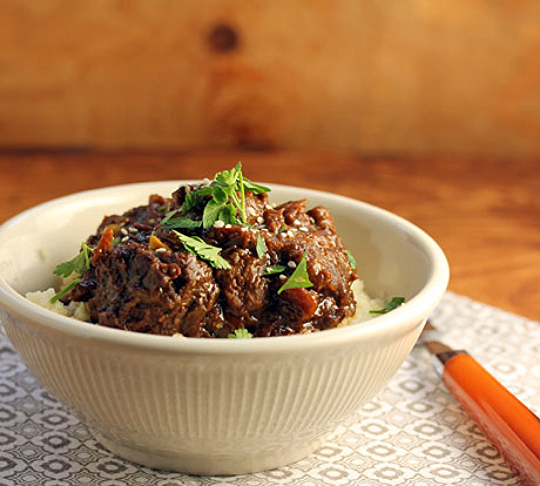 Packing continues for our move to Boston in a couple of weeks, and as I pack my kitchen, I'm downsizing like crazy. This means that every pot, pan, dish, and utensil undergoes scrutiny. Have I used it enough to give it precious shelf space in the tiny kitchen I'll have in the new apartment? My Dutch oven makes the cut, of course, and my favorite tagine pot -- one with a cast iron bottom and a ceramic top that looks like an inverted flower pot, made by my friend Bob -- earns its place, too. As I was about to pack the tagine, I decided to give it one more turn in the log house kitchen, and this beef stew with apricots and onions was the happy result. The combination of meat and dried fruit, so popular in North African and Middle Eastern countries, along with cinnamon, elevates this beef stew with a sweet and sour note that's both unusual and pleasing, giving the stew a brighter flavor. I used organic dried apricots, which have a dark, musky color; for little pops of orange in your tagine, choose regular dried apricots, found in the produce section of your supermarket. Ras-el hanout is a spice blend that contains cumin, along with a dozen other spices, and if you can't find it, cumin makes an acceptable substitute. 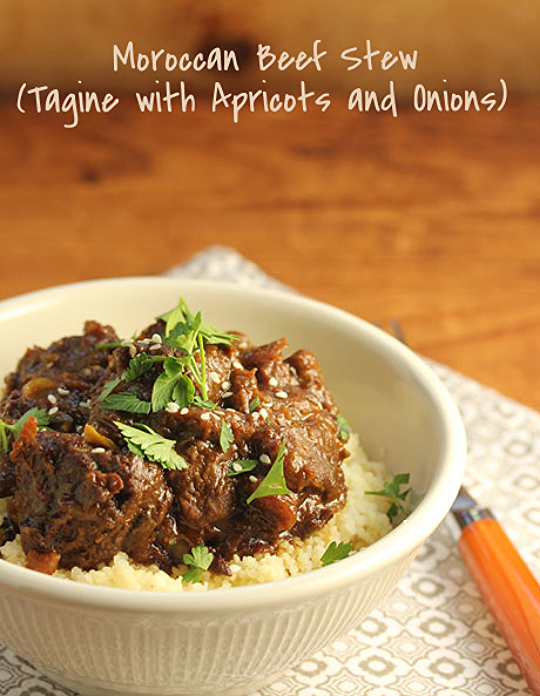 Spread the onion and garlic slices in a Dutch oven or in the base of a tagine (use a diffuser if needed).

Dry the cubes of beef with paper towels, and add to a large mixing bowl. Toss in the cinnamon, salt, pepper, turmeric, saffron, ras el hanout, and olive oil. With your very clean hands, mix everything together, making sure the spices are distributed throughout the meat. [Note: your hands will get a little bit yellow from the saffron and turmeric, so if you don't like that, wear gloves.]

Add the meat to the pot, cover, and set the heat to the lowest possible simmer. Cook for 1 hour. (Note: if you are using a Dutch oven instead of a tagine, you might need to add up to 1/2 cup of water to keep the meat from sticking. The conical top of the tagine pot will return moisture to the dish, and you won't need to add more.)

In a glass measuring cup, place 1 cup of dried apricots. Cover with water, and microwave on high for 3 minutes. Remove, and set aside to let the fruit rehydrate a bit.

After the tagine has been cooking for 1 hour, drain the apricots and add them to the beef, along with the agave nectar. Cover, and continue to cook for 1-1/2 hours, until the beef is completely falling-apart tender.

At that point, uncover the pot, and cook until almost all of the liquid has evaporated. Stir frequently to keep the stew from sticking. Taste, and adjust as needed with more agave nectar, salt and pepper.

Serve hot, over couscous or rice.

This sounds delicious; I love the spices you've used here!

Kalyn, thanks. The slightly tart apricots with the sweet cinnamon are an irresistible combination.

I love Moroccan food! The first (and only) time I had it was years ago at the Reading Terminal Market in Philadelphia for a Cook & the Book event. I just bought the ras-el hanout and saffron at The Spice House. Thank you so much Lydia! Good luck on your move!

Natasha, thanks so much. I'm going to treat myself to some fresh new spices when we move!

I am so excited to have discovered your blog ... and this gorgeous recipe! (No kidding - my tummy is rumbling as I look at these gorgeous pics!) I love Moroccan flavors, and this looks absolutely outstanding! Definitely pinning to share!

Shelley, welcome! I love Moroccan flavors, too, and hope you will try this wonderful tagine.

Thanks for the receipe, its sounds great. I have a plain clay cooker that goes in the oven do you think that this receipe would work with my clay cooker ?