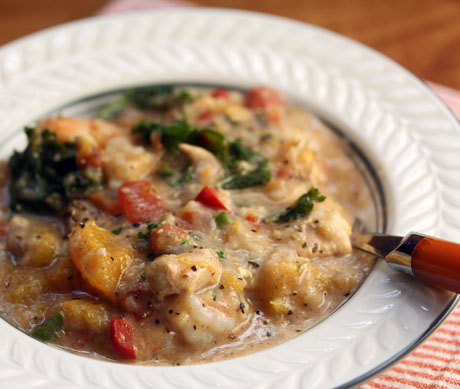 A few weeks ago, I awoke in the middle of the night, craving Caribbean pepper pot. Can you imagine what I was dreaming about? Adventures on the high seas? Salsa dancing on the beach? Bright colored head scarves and flowing tunics? Johnny Depp? I wish I could remember. Not to worry, though: I remembered the important part: spicy stew, filled with the goodness of the islands, and I absolutely had to make it. In my dream there was shrimp and rice and callaloo, a typical dark leafy green grown throughout the Caribbean. It's not impossible to find callaloo at specialty supermarkets, but I swapped kale, which was perfect. Most pepper pot recipes call for fiery hot habañero peppers in terrifying quantities. I substituted several milder jalapeños, and there was still plenty of kick. Please do not omit the pepper. If you don't like spicy food, make another dish. After all, this one is called pepper pot for a reason. I made enough for Ted, Christine, Rebecca, Shweta and Robby, who had his portion for breakfast, and when they polished it off, I regretted I hadn't made more. May the recipe bring you amazing food-filled dreams. 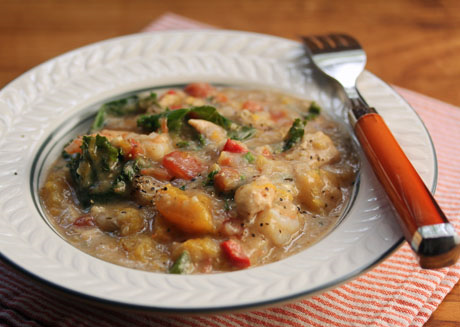 Adapted from Slow Cooker Comfort Food, this recipe serves 6-8. To halve the recipe, use a 3-quart slow cooker.

Note: I used my 6-quart Ninja slow cooker, and prepared everything right in the cooker. If you have a Ninja or other cooker in which you can sauté, make the entire dish in the slow cooker instead of using a skillet for the first steps.

In a nonstick skillet, heat the oil over medium heat. Add the onions and cook, stirring frequently, for 3 minutes until just softened. Stir in the garlic, ginger, salt, pepper, allspice, thyme and bay leaves, and cook for 1 minute. Then add the rice, and toss until everything is combined.

Pour in the tomatoes, with their juice, plus the chicken stock, and bring the mixture to a boil.

Transfer the mixture to a 5- or 6-quart slow cooker.

Stir in the squash and chicken. Cover and cook on LOW for 5 hours. Lift the lid and stir once or twice during that time.

[*While the stew is cooking, prepare the hot peppers. The original recipe called for 1-2 habañero peppers, which would make this entirely fiery. Instead, I used 3 jalapeños. From 2 of the peppers, I removed the ribs and seeds. I left the ribs and seeds in the third pepper. This made a nicely spicy stew. If you don't love heat, try just one jalapeño with the ribs and seeds removed. Don't omit the pepper entirely, or you won't have a pepper pot!]

After 5 hours, open the cooker and stir in the kale, a bit at a time until it has all settled into the stew. Add the shrimp, jalapeño pepper, and coconut milk. Stir everything together; it will look strangely disconnected at this point, but don't worry.

Turn the cooker to HIGH. Cover and cook for 20 minutes, until the kale is wilted and the shrimp is pink. Stir well to incorporate everything. Remove and discard the bay leaves.

More chicken-and-shrimp, so happy together:
Chicken and shrimp jambalaya
Pie-ella

This looks really good and different than my usual soups/stews. What do you think of sweet potato instead of squash? Does pepper pot always use chicken and shrimp or do versions have different proteins? I've never really had a chance to have Caribbean food.

Laurie, this is a forgiving stew, so please make it your own. Sweet potatoes? Sure, though it might fall apart a bit more with long cooking so adjust your cooking time. If you want to use all chicken, or all shrimp, that's fine, too. I hope you'll try this; the recipe is a winner. And be sure to explore the other Caribbean recipes here (use the recipe index at the left to find them).

This sounds like a wonderful dish. And I hope you got to dream about Johnny Depp!

Kalyn, me too. Johnny Depp can invade my dreams any time.

That looks SOOO good, Lydia! It's getting to be soup and stew time of year for sure. We've had chili this week already. And dreaming of the Caribbean--food related or not--is good any time. ;-)

Shirley, this is a stew that really says "Fall" to me. Enjoy!

This looks absolutely amazing and perfect for a cold autumnal day like I'm having here today! What's surprised me is the fact that I have nearly all the ingredients in my cupboard - all I need are the peppers. Loving that it's gluten free too.

Olivia, don't omit the peppers! That's what makes this dish a pepper pot. And it's perfect for a cool day like today.

Thanks for this recipe Lydia! It adds something different to my slow cooker recipes for sure! I did try it last night, subbing sweet potato for squash. I got a deal on some bone-in stew pork, so I made a broth in the slow cooker from that , then picked the meat from the bones. I also added black beans and pidgeon peas (both canned) from my pantry. I now have a hearty stew/soup, with leftovers in the fridge and the freezer for later!

Made this tonight. Came out kind've thick. Used sweet potato because I had a couple to use up. Has a nice flavor. Will use traditional Scotch Bonnet peppers and butternut squash next time. All in all nice comfort food for the cold temps😊

This, unfortunately, is not pepper pot at all. Traditionally, pepper pot is a very dark brown, sweet stew served at Christmas. This is closer to Guyanese cook-up rice or Trinidadian pelau.
However, it does look delicious. I just wanted to clarify this as if I look for recipes, I want know if they are authentic or not.