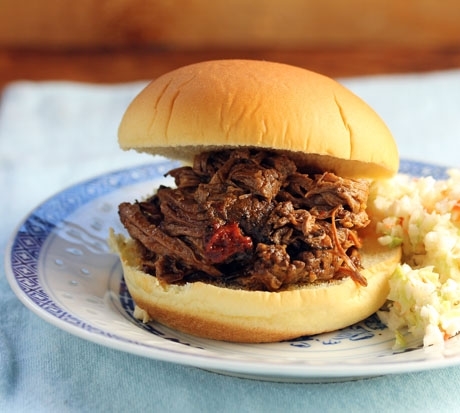 If a thing is worth doing, it's worth doing until you get it right. That's true in life, in work, and in brisket. The goal? A bit of that plate-staining, chin-dripping, smoky sauce and the burnt ends that come with real barbecue, combined with the ease of the slow cooker. After a few tries, I think I nailed it. Two techniques enhance the barbecue-like quality. First, I cut the large brisket into four smaller pieces, which gave more edge to brown. Second, when the meat was cooked, I let it cool, uncovered, on the kitchen counter; the edges dried out, making it more like burnt ends from the barbecue. I sliced half of the brisket, and shredded the other half, and doused both with the sauce from the slow cooker. Drippy barbecue, tender brisket, "burnt" ends: done and done. Adapted in significant ways from this recipe on Chow. Serves 10 or more.

Combine all of the sauce ingredients in a measuring cup, and set aside.

Cut the meat in half with the grain, then cut each piece in half across the grain, so you end up with 4 roughly square, approximately equal size pieces. Set the meat on a rimmed baking sheet or platter.

In a small mixing bowl, combine all of the remaining dry ingredients. Pat the dry mix on the meat, and be sure to cover all sides with a thick coating.

Heat a large nonstick frying pan on medium heat. Brown one or two pieces of meat at a time in the dry pan (you might need to turn on your stove vent!). It will take a very short time to do all of the meat.

As each piece is browned, transfer it to a 6- or 7-quart slow cooker. When all of the meat is in the cooker, pour the sauce over it.

Cover and cook on LOW for 8 hours, until the meat is very tender. Remove the meat from the cooker, and pour off the sauce into a bowl.

If you want sliced brisket, let the meat sit out, uncovered, until it cools to room temperature. Slice and serve with some of the sauce, or pack it into containers, and pour the sauce from the slow cooker around it. Refrigerate or freeze.

If you want shredded brisket, remove the pieces from the cooker into a large mixing bowl. Trim off any surface fat, and use two forks to shred the meat. Then, take a pair of kitchen scissors (the ones you use only for food), and cut the shreds into smaller pieces. (A knife and fork will be fine, if you don't have shears.) Let the meat sit out until it cools and the ends dry out. Then add the meat to the bowl with the sauce, and toss it all about to moisten the meat.

Other recipes that use these pantry ingredients:
Brie and brisket quesadillas or tacos with mango barbecue sauce, from Confections of a Foodie Bride
Oven-baked barbecue ribs, from The Kitchn
Slow cooker pulled barbecue chicken sandwiches, from Recipe Girl
Chipotle maple barbecue beef brisket, from Leite's Culinaria
Barbecue beef sandwiches, from Buns in My Oven

Jeanette, it took me a few tries to figure that out, but it makes a big difference.

Brilliant idea to cook it in pieces! This sounds so delicious.

Kalyn, I love to experiment with techniques, and this one seemed to work really well.

Lydia,
I'd love to get that barbecue flavor at home, complete with burnt ends and all. Your technique sounds simple and brilliant.
Thanks!