First published in December 2009, this updated ingredient post features new links and tweaks to the recipe. Even though we associate latkes with Chanukah, they're a crowd pleaser at any time of year. Make small ones for your Sunday football parties, or large ones for a vegetarian dinner main dish. Kids love latkes smothered with sour cream or apple sauce. 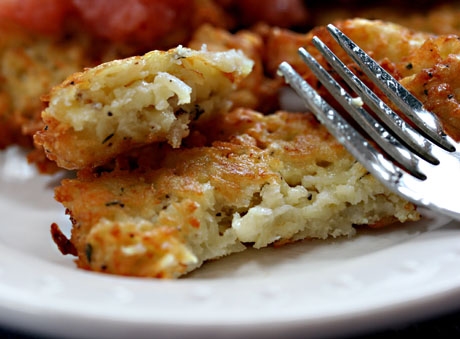 Rudolf Diesel had a dream.

When the German inventor and Utopian idealist demonstrated his new engine at the 1900 Paris World Exposition, it ran not on petroleum, but on peanut oil.

In the perfect world, Diesel believed, renewable biofuels like peanut oil could power farm machinery and automobiles. In our imperfect world, my car still drinks gasoline, but peanut oil powers my frying. 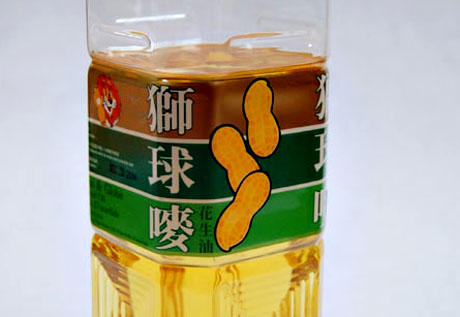 Low in the saturated fats that can elevate cholesterol, peanut oil is made by passing cleaned peanuts through hullers to separate the kernels; the kernels, which contain 48-56 percent oil, are then crushed, heated and pressed in hydraulic presses. The extracted oil is used in the manufacture of margarine and shortening, and as a cooking oil.

Most American peanut oils are mild-flavored, whereas Chinese peanut oil, less heavily refined, has a nuttier flavor. It's valued in Asian cooking for its high smoke point. (Smoke point is the temperature to which an oil can be heated before it begins to smoke and discolor, which means the oil is decomposing.) Peanut oil's smoke point is 450°F, compared to extra-virgin olive oil (405°F), canola oil (400°F), and butter (350°F).

If you are allergic to peanuts, you can substitute another high-smoke-point oil -- canola, grapeseed or rice bran -- for most frying applications. 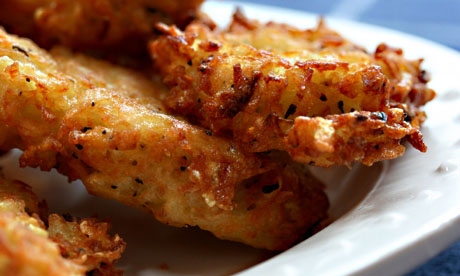 Serves 6; can be multiplied.

Prepare a large mixing bowl by spreading a clean dish towel inside.

Peel the potatoes and onion, and cut into chunks that can fit through the feed tube of a food processor. With the processor fitted with the shredding blade, pass the potato and onion chunks through until everything is shredded. Dump the shredded potato mixture into the clean dish towel, and squeeze until you've gotten all of the liquid out that you can.

Remove the shredding disk and insert the metal blade in your processor. Add the potato mixture back into the processor, and pulse 10 times to chop slightly without pulverizing your potatoes. Remove from the processor into a large mixing bowl.

Add peanut oil to a large frying pan, to a depth of 1/4 inch. Preheat the pan over medium-low heat while you finish making the latke mixture.

Add the remaining ingredients, except the oil, to the potatoes and mix thoroughly (I use my impeccably clean hands for this). Test that the oil is hot by inserting a chopstick vertically; if you see little bubbles emanating from the tip of the chopstick, the oil is hot enough.

I always make one tiny test latke, so I can make sure the mixture has enough salt. You can skip this step if you wish.

Drop the batter in large spoonfuls into the oil, a few at a time. Cook until brown on both sides, to your desired level of crispness (I prefer medium brown, with a moist center). Remove to a plate covered with paper towels and drain thoroughly. (Latkes are best made right before you plan to eat them, but you can make them up to a day ahead and reheat in the oven at 400°F for 10 minutes.)

NOTE: You can make latkes without a food processor; simply grate the potato and onion on the largest holes of a box grater. Squeeze out the liquid in a clean dish towel, and proceed with the recipe.

I've never made latkes and only eaten them once in my whole life! Some day you must make them for me.

Applesauce AND yogurt, these days.

Kalyn, I would love to do that. I make a sweet potato version, too.

Susan, yogurt -- we'll have to try that. The applesauce is a must for me!

It is interesting that Chinese peanut oil is different from other peanut oils - I had no idea. I haven't had a latke in a very long time - these look so tempting Lydia!

Jeanette, it's easy to make these gluten-free, so enjoy!