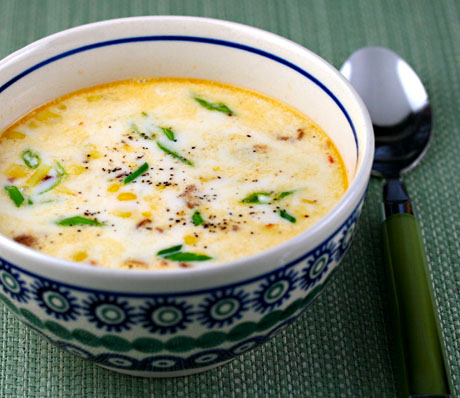 The first time I made this smoky corn chowder, to test the recipe, our friends Bob and Charlotte came for dinner. Bob, a wonderful potter, brought a new soup tureen he'd designed. I proclaimed the tureen a hit, and he ate three servings of soup, which I think qualifies as a hit, too. Here in New England, everyone loves chowder. Clam chowder, fish chowder, scallop chowder -- clear or white or, sometimes, red -- each has its devoted fans. If you don't eat fish or shellfish, you need not be left out of our lovefest; this fish-free corn chowder might become your new favorite. It has all of the heft of seafood chowders, plus added natural creaminess that oozes from the corn. Our season for fresh corn begins in a couple of weeks, and lasts only until early September; during the rest of the year, we rely on good-quality frozen organic corn, or Trader Joe's frozen fire-roasted corn, which doesn't need to be defrosted before you add it to the soup pot.

In a Dutch oven or large sauce pan, cook the bacon over low heat until it's crisp, but not burned. Transfer to a paper-towel lined plate. Pour off all but 2 tablespoons of the bacon drippings. Add the leek and cook, stirring frequently, until soft but not yet brown.

Add the garlic, paprika and cayenne, and cook for 2 minutes. Stir in the corn, broth, half-and-half and milk. Raise heat to medium and cook, stirring occasionally, until the soup is just beginning to boil. Remove from heat.

If you like your chowder thicker, use an immersion blender to puree half of the soup. Add the bacon back into the pot. Season with salt and pepper to taste, and serve hot, garnished with scallions.

Other recipes that use these pantry ingredients:
Corn chowder, from Simply Recipes
Roasted corn chowder with lime, from Gluten-free Goddess
Bacon-cheddar cauliflower chower, from Iowa Girl Eats
Parsnip chowder, from Use Real Butter
Corn and chicken chowder, from Buns in My Oven

Because I work in a place that is frequented by many vegetarians - I have learned to make an acceptable substitute corn chowder. In fact, it is really good.
Bring big pot of water to boil and shuck a slew of corn cobs. Blanch them in said water. Cut the kernels off and refrigerate. Make a two hour stock using the cobs. Next day proceed with sauteing leeks, etc in oil. I use onions, leeks, a bit of garlic or shallots, and celery. When they are translucent add about half the cob stock and then cut up potatoes. Finish with just a bit - like just a half cup or so of heavy cream and add the corn kernels. Season with S&P. Puree half soup for added thickness or add some left over mashed potatoes.

That chowder looks fantastic, Lydia! I do love corn in chowder, especially with bacon added. ;-)

My mom used to make corn chowder, and it was a favorite dinner at our house! I love the use of leeks in your version; sounds delicious!

For a smoky taste without the bacon a small amt of organic smoke flavor is worth a try for vegetarians. For those who don't eat pork, cooking the chowder with smoked turkey wings (available at many markets) is also an alternat e for that smoky flavor.

Lydia,this looks amazing. I would love to pair it with a crab cake!

Nancy, on Soup Chick I have a great recipe for corn stock, and that really would be perfect in this recipe. Your soup sounds delicious.

Kalyn, I grew up in a clam chowder household, and never tried corn chowder until I moved to New England. Isn't that odd?

Cousin, lots of good alternatives for the smoky flavor, including several types of smoky pepper. I often use barbecue sauce in soups and stews to get that taste without meat, but I think it would yield an un-chowder-like color!

I can't wait to try this! Love corn and bacon together! Thank you!

Winnie, sometimes I'm a purist and will only eat corn on its own. But everything's better with bacon!

I grew up with a mom who made vegetarian corn chowder - but bacon always makes everything better!
however, not a fan of the clam.(but don't tell anyone as they might revoke my "native New Englander" license!)

Carol, I know how attached New Englanders are to their clam chowder, but I never tasted corn chowder until I moved to New England. Go figure.

This recipe looks absolutely delicious :D
So many ingredients, my mouth is watering!

Lydia,
I was going to jump in when reading Nancy's comment that I learned about corn stock FROM YOU! I love the whole 'getting something from nothing' aspect of making that.
My kids would like this with the immersion blender, thank you, and I like the pretty Polish pottery (?) or at least Polish pottery-looking bowl.
Thanks!

CCU, Mjskit: it's really a great soup, and the smoked paprika adds a nice touch.

Kirsten, I only make that corn stock during corn season, which here in Rhode Island is woefully brief. It adds such a nice dimension to soups and stews.