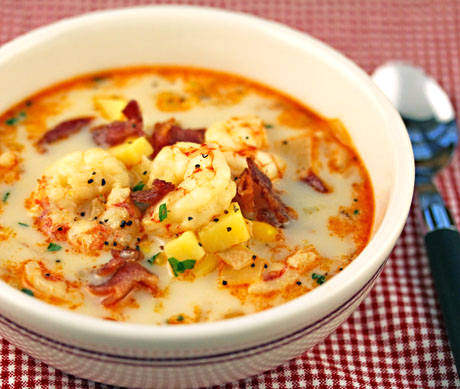 What makes a chowder a chowder, and not just a fish soup? The name comes from the French word chaudiere, a three-legged cauldron. When ships returned from the sea, every village had a large chaudiere waiting at the dock; each fisherman added a portion of his catch, big pieces of fish cleaned and cut right on the boat, to be served later as a communal meal. It's a shame that most of us no longer get our fish directly from the docks, and that we make chowder in our own kitchens instead of a communal pot. While our way of life has changed, the basic chowder remains the same: a fish-based soup, thick with big chunks of fish or shellfish. This shrimp, corn and bacon chowder gets a double whammy of smoky flavor from pimentón (smoked paprika) and the bacon. I call it a pantry chowder, because I always have shrimp and corn in the freezer, and a combination of clam and chicken broths from the pantry makes a fine substitute for fresh fish stock. In a Dutch oven or large sauce pan, cook the bacon over low heat until it's crisp, but not burned. Transfer to a paper-towel lined plate. Pour off all but 2 teaspoons of the bacon drippings.

Add the onion to the pot and cook, stirring frequently, until soft but not yet brown.

Add the garlic, paprika and cayenne, and cook for 2 minutes. Stir in the potato, and mix well to coat the potatoes with the seasoning. Stir in the corn, clam broth, chicken broth, half-and-half and milk. Raise heat to medium and cook, stirring occasionally, for 15 minutes, until the potatoes are tender when pierced with a knife.

Reduce heat to low, and add the shrimp. Cook for 3-4 minutes, until the shrimp are pink and curled. Stir in the parsley and the reserved bacon. Taste the soup, and adjust seasoning with salt and pepper, if needed.

I don't think I've ever made a "chowder" - must remedy that!

Looks so delicious, but so not on my diet, sigh.

Pam, you must! Here in New England, chowder is a way of life.

Kalyn, sadly, not on my diet, either, so it's a very occasional treat.

Everything in moderation . . . and I'll make room for this, Lydia. It looks simply lovely, and I still have corn in the freezer, put up from the summer!

This sounds perfect for tonight! My delightful fishmonger sold me a 2# bag of little frozen shrimp that she sells to the wholesale restaurant trade, but because I'd asked for small shrimp for a recipe I was making, she offered the package from the back and sold it to me at the wholesale price! This woman is wonderful. She gave me fish heads last summer to plant under my tomato plants. I am so lucky to live near her and lucky that you shared this recipe Lydia! Thank you!!!

We are in the middle of a big snow storm, and that bowl of goodness would do just the trick to combat the chill! It looks so rich and satisfying. Thanks for sharing!

Every time I come to your site, I find another recipe I want to make. This chowder reminds me of one that my parents and I used to enjoy on family vacations down the Oregon coast. Really lovely, Lydia.

Kirsten, moderation is key, and once in a while, this chowder is a real treat.

Cary, you are all set to make this soup! How lucky you are to have a fishmonger who shares those goodies usually reserved for restaurants.

Kelly, same here. Nothing beats the cold winter snow like a hot bowl of chowder.

Cookin Canuck, thanks so much. Soup should always bring back such good memories!

I think I salivated when I saw this. Oh, my. I love a good chowder and this recipe has all the right flavor going on. Can't wait to try it.

Kellypea, the snow is coming down like crazy now, and a bowl of this smoky chowder would be the perfect antidote. So if you make it, think of us in New England!

This was easy to prepare and delicious! Did heavy cream instead of half and half. Even my 11 year old liked it!

I would like to make this for 16 people, but, the recipe doesn't tell me what the portion size is. Can you help?

Maudy Fish, I don't know what size bowls you are using. The recipe serves 6 as a main dish, so I'd double it for appetizer size soups, and triple for a main course soup.