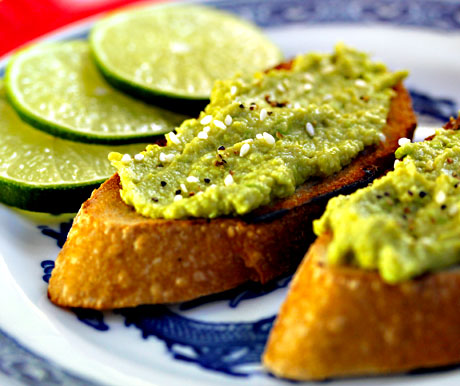 In a year in which I promised to eat more kale (done), and ended up eating even more broccoli slaw and turkey meatballs, my list of top twelve favorite recipes of 2012 features an eclectic collection of mostly Asian and Mediterranean-inspired dishes, plus a few others that are so simple, you'll be surprised to find them on this list. And there's not one dessert among them.

Of course, there were cookies and muffins, and gooey chewy brownies, and there were noodles, not as often as in previous years, but enough to keep the carb monster at bay. We ate more brown rice than white, more low-carb pasta than traditional pasta, and more whole grain cookies and muffins than ever before. Still, we've cut back on carbs and cookies, and it shows in the recipes I've chosen for this end-of-year favorites list.

However, even though they're not sweet, my favorite dishes from the past year are packed with flavor. In no particular order, here are my Top 12 recipes of 2012: 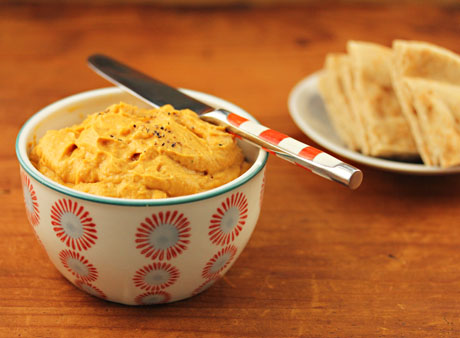 Pumpkin "hummus". Leading off the recipes with a Mediterranean influence, this appetizer wowed everyone who tasted it. Make this in seconds, from ingredients you probably have already in your pantry. 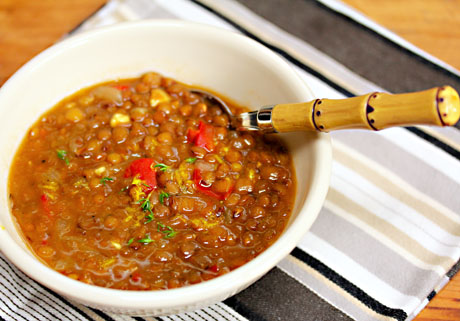 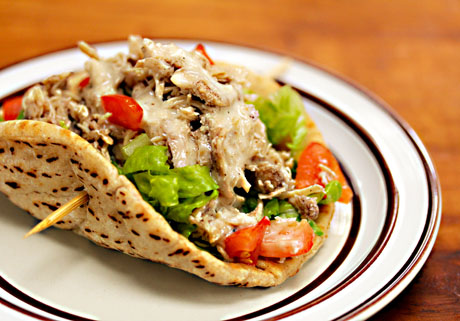 Greek pasta salad with sun-dried tomato vinaigrette. Yes, vinaigrette really isn't Greek, but this dressing (you can use your own slow-roasted tomatoes, if you have some in the freezer) stands on its own and takes this pasta salad over the top. This recipe rapidly became The Perfect Pantry's most popular recipe on Pinterest. 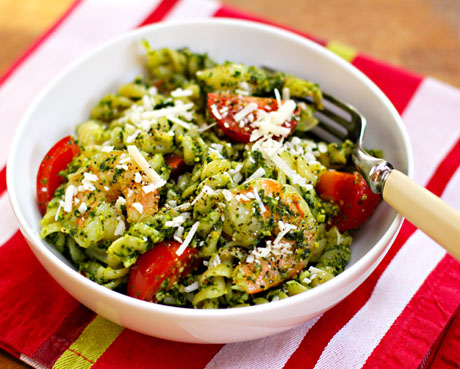 Pasta with kale pesto, shrimp and tomato. Ah, kale. It took a few months, but I did fall in love with this dark leafy green. I made batch after batch of kale pesto, which I've stashed in the freezer to get us through the winter. Add it to a pasta salad with shrimp and tomato, and you have a new classic.

Moving on to a few recipes with an Asian influence, Avocado and edamame spread (photo at top), a quick and easy appetizer if you start with pre-cooked edamame (soybeans), can be spicy or spicier, according to your own taste. The sesame adds a pleasing, smoky balance. 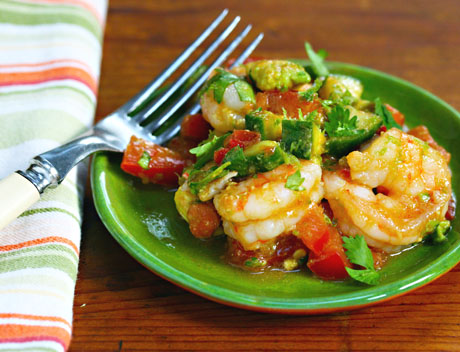 Spicy Asian shrimp cocktail is the kind of recipe I could eat for a main dish, and I could probably eat the entire batch. I like mine spicy (no surprise), but it's just as good on the milder side. 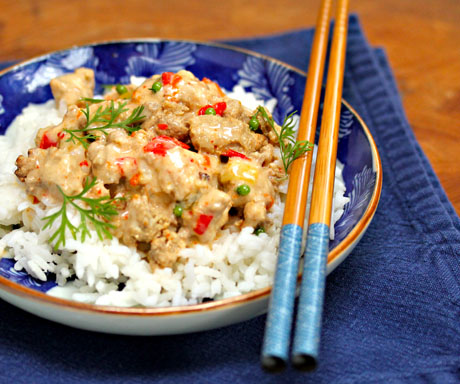 Slow cooker Thai red curry turkey is another adaptation of a beloved stove-top recipe. Make this ahead and refrigerate or freeze, then reheat in the microwave with some cooked white or brown rice. 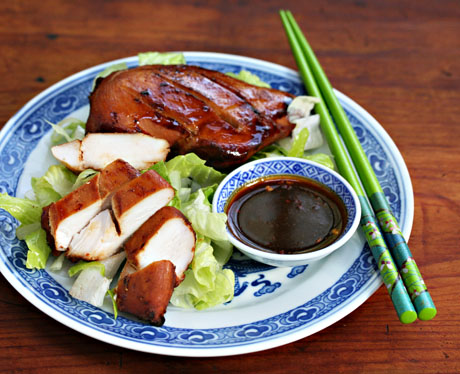 Penang-style baked chicken, a fusion dish, has a long list of ingredients, but you have most of them in your pantry. I love this dish for picnics; it's equally good served hot, over rice. 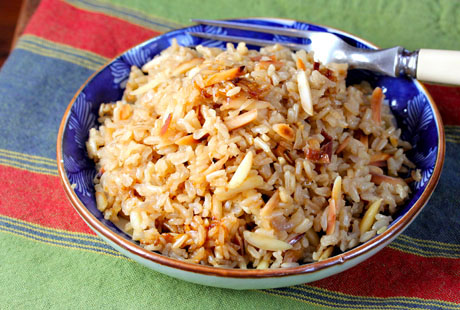 Brown rice and almond pilaf takes advantage of the rice cooker's ability to turn out flawless rice. Start by caramelizing some onions, right in the cooker, then finish the recipe with almonds. This is a great side dish with roast turkey or grilled beef. 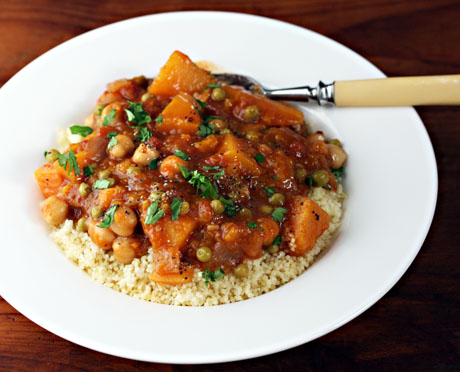 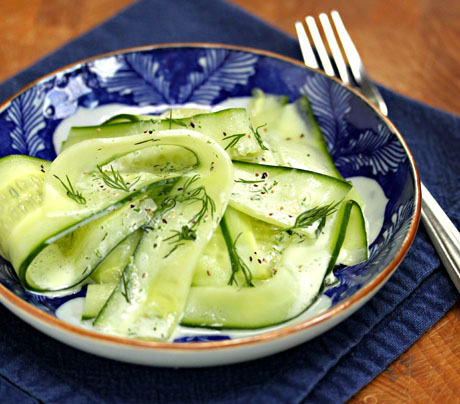 Cucumber ribbon salad with ranch-style buttermilk dressing seems like such a simple dish, and it is, but there was nothing more refreshing this past summer than strips of cucumber with a light herb dressing. If you own a mandoline, or received one for a holiday present, it's easy to slice these thin strips of cucumber.

Did you create or make a new-to-you recipe in 2012, one you love and now make again and again? Do tell!

I love your roundup, Lydia. I was surprised when I took a look back and saw my own favorites for the year. Now I just have to get that post up!

Love so many of these!

Shirley, George: Thank you. I love lists like this and I'm glad you do, too. I realized this year that desserts have fallen off my radar screen a bit.

One of my favorite recipes from 2012 was sweet potato hummus, so I can see why you loved that pumpkin hummus.

A new recipe I tried this year that I will make again and again is fruit and nut cookies- they were a hit during the holidays.

I'll have to make the almond pilaf- how did I miss that?? Happy New Year, dear Lydia.

Nupur, sweet potato hummus would be just about the same as this pumpkin version, and I know I would love it. Wishing you and your family a wonderful new year -- new city, new adventures! xo

I love all your favorites! And we must be channeling each other because I have a slightly different version of Greek Lentil Soup in my slow cooker right now!

As I said on Facebook, your blog is one of the best recipe sites going. Every single one makes me want to cook and eat; your recipes are simple, healthy, healthful and so full of flavor! You inspire! I'm so happy that 2012 brought us back together again! I'd been away from The Perfect Pantry far too long! Wishing you and your family a wonderful, happy, healthy and safe 2013! xo

Kalyn, we do love the same flavor profiles! And lentils.

Jamie, thank you so much for your kind words, and for the wonderful recipes and stories you share on Life's a Feast. I hope 2013 is the year that finds us in the same kitchen, cooking together. xo

Fabulous list of recipes, Lydia. They're putting my lunch to shame :/ Happy New Year to you!

Kelly, thanks so much. Whenever I feel like I'm in a cooking rut, I look at your site to see what gorgeous things you're cooking. Happy New Year to you, too.