First published in August 2006, this updated pantry ingredient post features new photos, links, and a few tweaks to the recipe. Spicy and salty, these large shrimp make a tantalizing appetizer to serve with cocktails, or as part of a larger Chinese banquet. Be warned: salt and pepper prawns are highly (and delightfully) addictive. 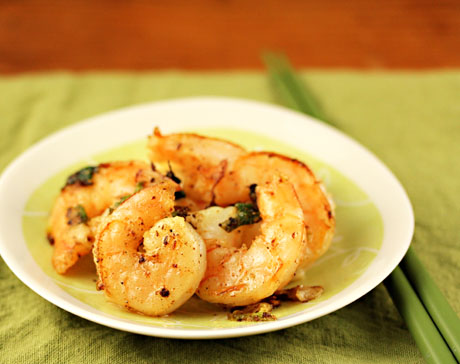 File this under "explorations in an ethnic market where you don't speak the language and can't read the package labels and you've wandered up and down the aisles and looked and looked and know what you want is somewhere in the store but you cannot find it."

So you ask everyone in the market, which by the way is in Boston's Chinatown, "Do you have szechuan peppercorns?" Blank stares. You try different pronounciations — sesh-wan, setch-wan, setch-u-on. Pep-per-corn. Pep-pah (the Boston dialect).

Nobody understands your pantomime.

Fair enough. After all, you are the only one there who doesn't speak the language.

Frustrated but determined, you ask your husband Ted to bring his Chinese friend Margaret to the market to search for these peppercorns. A few days later on their lunch break, they go -- but they come home empty-handed, too. Which, frankly, makes you feel a teensy bit better. 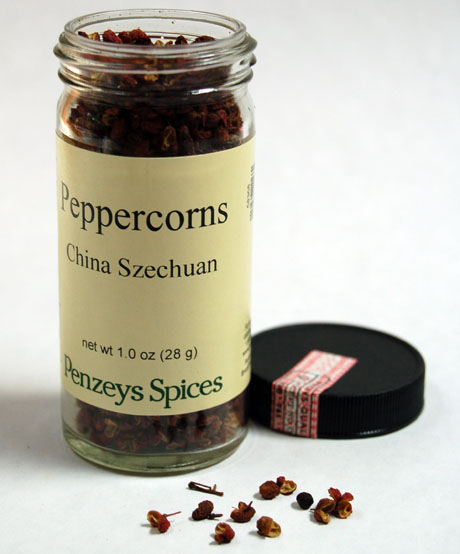 Turns out that, back in 1968, the US Food and Drug Administration had banned the importation of szechuan peppercorns, because they might carry a citrus canker that could endanger the foliage of citrus trees. My old Chinese cookbooks didn't respect the ban; on the contrary, they happily featured this key ingredient — a mainstay of five-spice powder — in my favorite spicy recipes (Ma Po Tofu, Kung Pao Chi Ting), without regard to whether I actually could purchase it in the US. In 2005, the import ban was lifted.

Yes, szechuan peppercorns are back. By law they must be heat-treated to 160°F or higher temperature before entering the US. Though the heat-treating may inhibit (ever so slightly) the peppercorns' full flavor, there's still no taste quite like the pungent, smoky, fizzy-mint tickle on your tongue.

Szechuan (also spelled Sichuan or Szechwan) pepper is not a pepper at all; it's the berry of a deciduous prickly ash shrub. In some older cookbooks, it's called fagaro. The flavor resides in the shell, or husk; the small black seed inside usually is discarded, as it imparts a gritty texture when cooked. Most recipes call for grinding or crushing the shells, both to release flavor and to enable the spice to blend more easily with others.

By the way, Ted and Margaret did discover one thing on their peppercorn prowl all those years ago. In Chinatown, Szechuan peppercorns are called...simply...pepper. 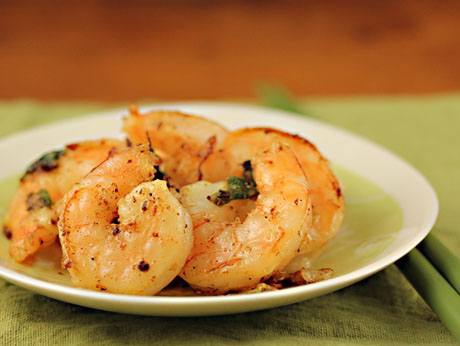 In a small bowl, mix 2 Tbsp of the oil with the shrimp, and set aside. In another small bowl, lightly pound the peppercorns, and mix with the salt. Set aside.

Heat a wok or large frying pan. When the pan is hot, add remaining oil. Stir-fry the shrimp for 1 minute, and remove shrimp from the pan. Pour off all but 1 Tbsp oil. Bring the wok oil back to heat, and add the chile, garlic and scallions. Stir quickly, and add the shrimp. Sprinkle on the salt and pepper mixture, and stir-fry for another minute. (Do not overcook the shrimp, or they will taste like rubber!)

Serve hot or at room temperature.

Other recipes that use these pantry ingredients:
Spicy Szechuan peppercorn chicken, from My Kitchen Snippets
Szechuan peppercorn and kumquat caramels, from Cooking Debauchery
Napa cabbage with chili-garlic sauce, from Not Eating Out in New York
Szechuan shrimp and vegetable stir fry, from Aggie's Kitchen
Chinese Szechuan spicy fish soup, from Jeanette's Healthy Living

I hope that 2013 is rich in experiences, filled with love and happiness and of course great food Lydia. Have a safe and happy New Year. Smile often it is contagious.

Bellini, I wish you the most wonderful 2013, with new travel adventures and fun!

I would love this for a New Year's dinner; sounds wonderful. And interesting about the banning of these peppercorns. I didn't know that.

Kalyn, I could eat these shrimp for my entire meal. They are salty, smoky and positively addictive.

HA!! This was too funny! (and informative) - thanks for clearing all that up!!