First published in October 2006, this updated pantry ingredient post features new photos, links, and a few tweaks to the recipe. Try this variation with dark chocolate chips, for a deeply satisfying chocolate cookie treat. (Where's the ice cream? It's in the dough.) 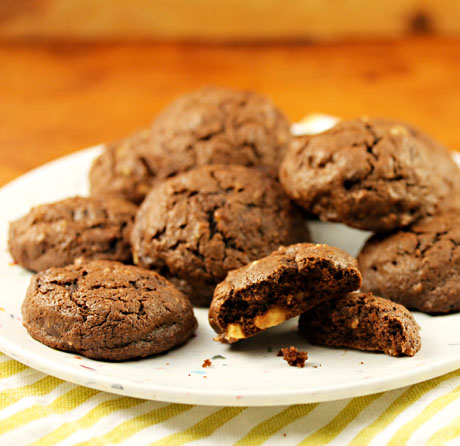 Chocolate and vanilla, the culinary Romeo and Juliet: grown in different areas of the world, stored in different parts of the pantry, but they find a way to be together in the end.

All the great chocolate desserts — ice cream, brownies, cakes and cookies — depend on vanilla to enhance the chocolate flavor. The Aztecs may have discovered this synergy, but the first people to spread the word were Spanish conquistadors, who got hooked on a chocolate drink flavored with vanilla at the court of Moctezuma, and sent vanilla pods back to Spain. 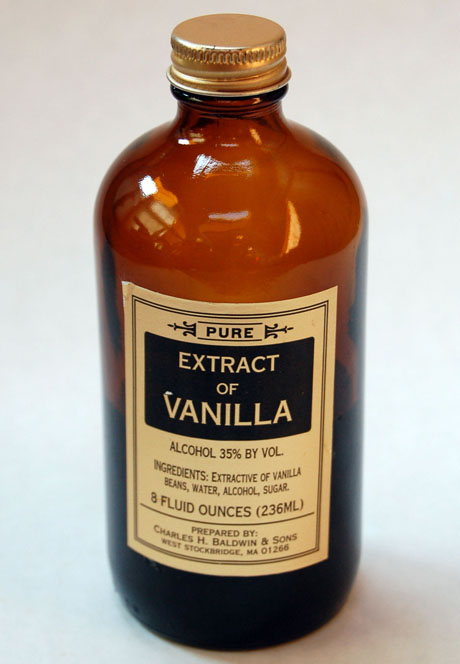 Vanilla pairs well with flavors other than chocolate, too, such as the "warm" spices: cardamom, cinnamon, cloves, and saffron. Usually we associate vanilla with sweets, but it marries with savory foods like seafood and vegetables, too.

Vanilla planifolia, a perennial, climbing orchid native to Central America, produces pods which actually have no aroma or taste until they are fermented. Vanilla extract, invented in the late 19th Century by pharmacists as a remedy for upset stomach, is made by macerating vanilla pods in ethyl alcohol — not bourbon whiskey, as the name implies. (The name originated in the 1800s, when the French developed large vanilla plantations on Réunion, which was known as Ile de Bourbon.)

If you plot on a map the countries that produce vanilla -- Tahiti, Mexico, Indonesia, Madagascar and Réunion -- you'll see that they are all within a similar latitude north or south of the Equator. Do the same with chocolate; you'll find that the major chocolate producers are all much closer to the Equator. (This is a fun thing to do with a giant world map and a group of kids.)

At a tasting I hosted in my own kitchen, fourteen parents and middle-school gourmands-in-the-making chose vanilla extract made by Charles H. Baldwin & Sons, a fifth-generation business in West Stockbridge, Massachusetts, as the favorite, besting the best quality Madagascar, Tahitian and Mexican vanilla extracts. The Baldwin family has been making Bourbon vanilla extract since 1888, and still uses the original oak vats to age the extract before bottling.

Most of the time I use Baldwin extract, but Cousin Martin brought some wonderful elixir from Tahiti, which has a rich and pronounced flavor that's lovely in baked goods. I've also got a bottle or two of the popular Madagascar vanilla extract, and some from Mexico that I don't like quite as much. 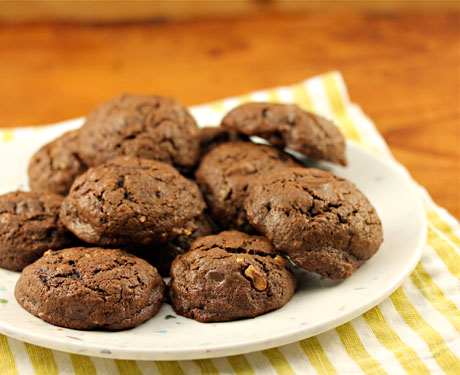 On rainy Sunday afternoons, Ted and I sometimes go "antiquing" — not for real antiques, but for old stuff. One of our favorite vendors had a stash of cookbooks: a Diana Kennedy book on Mexican regional cuisine, a volume on Hungarian cooking by a Hollywood producer, and The Search for the Perfect Chocolate Chip Cookie, from which I've adapted this recipe.

In a mixing bowl, combine flour, baking soda and salt.

In a large mixing bowl, combine butter, sugars, cocoa, and vanilla, and beat until creamy. (This will be tough going, so use a stand mixer if you prefer.) Add egg and ice cream; beat well.

Gradually add dry ingredients to the wet, and mix well. Stir in chocolate chips and walnuts, just until all of the ingredients are incorporated (do not overmix).

Bake at 350F for 14-16 minutes until well set. Do not overbake. Let the cookies cool on the baking sheets for 2-3 minutes, then transfer to a wire rack to cool.

Disclosure: The Perfect Pantry earns a few pennies on books purchased through the Amazon.com links in this post.

I realy really like antiquing and would like it even more if we can eat these afterwards.

Wow, I can't wait to try this recipe. Sounds great.

Jennifer, I like antiquing, too, especially when there's a stash of old cookbooks involved.

Karin, these didn't last long in my house! Hope you like them.

oh I LOVE posts like these; finding out the history of a certain food or spice.
I would love to try this brand of vanilla extract.
You know that smell, when you get to the bottom of the bottle of pure vanilla extract? It's always stronger at the bottom--I love that.
I've always been curious about how many varieties of cinnamon thre are....you know?

Vanillasugar, I don't know how many varieties of cinnamon there are. But The Spice House, Chicago based (and online), is very knowledgeable and sells several really good varieties. This vanilla extract has become my absolute favorite -- and it's made in Massachusetts!

I love chocolate chip cookies! The picture looks very delicious, I admit that I have never cooked biscuits but this convinced me! I will buy the ingredients and this weekend I will cook. Thanks for the recipe, very explanatory. I leave 10 points for this post!
Regards,
Carol | Recetas Faciles

Desperate with a sweet tooth now!!! oh how vanilla and chocolate is a match made in heaven!

Looks great and it has the one absolutely necessary ingredient for any cookie and that's chocolate.