Recipe for kale (or broccoli) soup with bacon and cheese 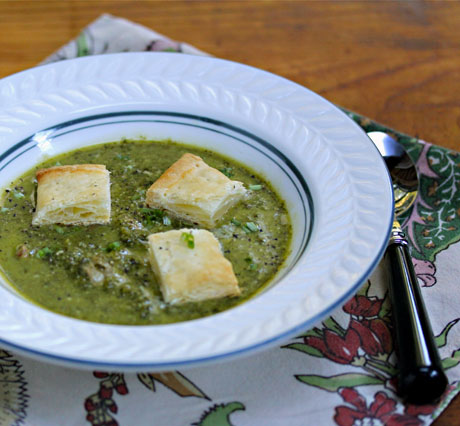 On one of those days in The Perfect Pantry kitchen, with recipe testing in the slow cooker, on the stove top, and in the oven, despite my careful planning I had a few cups of chopped kale left and no plan for it. A quick search in the refrigerator unearthed some bacon (always good with dark leafy greens) and shredded cheese, and just like that, this kale soup with bacon and cheese was born. Broccoli or broccoli rabe would be equally good, though I especially liked the combination of the slightly bitter kale with the salty bacon. This hearty make-ahead-and-freeze soup, with puff pastry croutons, cooks in less than half an hour. 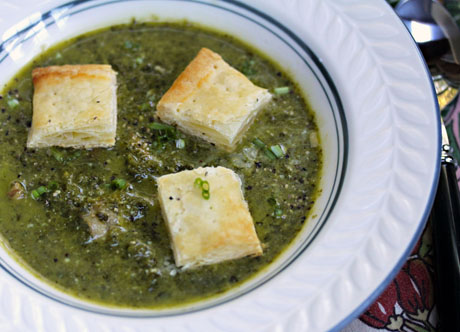 Kale (or broccoli) soup with bacon and cheese

In a 5-quart Dutch oven or heavy stock pot, cook the bacon over low-medium heat until the bacon is brown but not crisp. With a slotted spoon, remove the bacon and set aside.

Bring the soup to the boil over high heat; then, reduce the heat to simmer, cover the pot, and cook for 20 minutes.

While the soup is simmering, preheat the oven to 425°F.

Roll the puff pastry out on a lightly floured countertop, and cut with a sharp knife into 1-1/2 inch squares. Place the pastry squares on a rimmed baking sheet. Bake at 425F for 10-12 minutes, until lightly crisp. Remove from the oven and set aside.

Use an immersion blender to puree the soup, or puree in batches in a stand blender, and return the soup to the pot. Stir in the cheese and half-and-half, and continue cooking over low heat for 4-5 minutes, until the cheese melts.

Chop the bacon and return it to the pot. Taste, and season as needed with salt and pepper.

Serve hot, garnished with the puff pastry croutons, or allow to cool completely and freeze in airtight containers.

I love everything about this soup!

Kalyn, same here. The bacon is wonderful, but you could substitute smoked paprika or barbecue sauce to get a smoky flavor without the meat.

Mmmmm. I would actually love this soup with a blend of kale and broccoli! And the bacon and cheese make it! I love the puff pastry croutons but what about ladeling the soup into oven-proof bowls, placing a lid of puff pastry and baking till the puff pastry is cooked? Mmmm this is one of those super versatile soups. Perfect!

Jamie, I love the sound of that, a soup hidden under a puff pastry crust. Any mix of dark leafy greens would be great in this, and who doesn't have a few bits of broccoli hanging around in the fridge?

I have bookmarked this to try this winter. In this week's CSA share I got a huge bag of lacinato kale, a huge bag of spinach, a huge bag of turnips w/ greens attached, and a huge bag of salad mix. And more! I knew we wouldn't be able to eat all the leafy greens fresh, so I chopped, blanched, and froze a mix of all but the salad greens. I'm thinking that tossing a quart bag of kale/spinach/turnip greens into this soup would turn out well. I'll report back in January, when I'm no longer getting fresh produce from the CSA. Thanks!

This recipe sounds delicious with the broccoli. Nothing better than a big bowl of soup on a cold day :)