First published in May 2008, this updated pantry ingredient post features new photos, links, and a few tweaks to the recipe. If you missed it the first time around, please enjoy this seasonal rhubarb recipe and some fun facts about allspice. 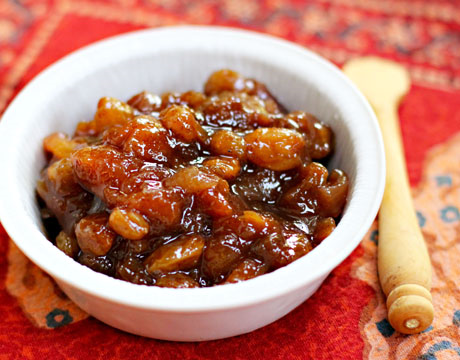 Next time I reorganize my spice rack, I'm abandoning my usual system.

Next time, I will not group the little jars into peppers, salts, baking spices, warm spices and leafy green herbs.

Next time, I'll sort my dried herbs and spices this way:

That covers just about everything on my spice rack, including allspice (a triple whammy: numbers 2, 3 and 4). 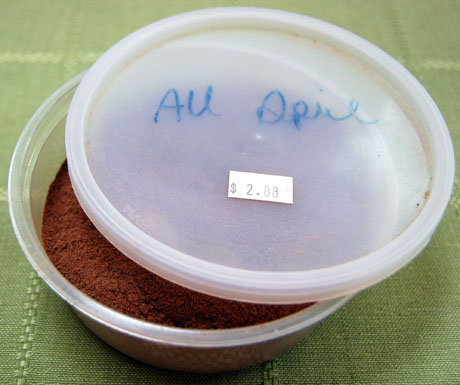 The dried berry of a myrtle tree native to the West Indies and Central America, allspice was discovered by Christopher Columbus, who, thinking it was pepper, named it pimienta. Subsequently it became known as Jamaican pepper, because most of the best quality crop grew there; the English gave it the name "allspice", because it mimics the aroma of several spices, including cloves, pepper, cinnamon and nutmeg.

According to Herbs & Spices by Jill Norman, "allspice is the only important spice that still comes almost exclusively from its region of origin -- which also makes it the only one grown almost exclusively in the New World." Today the majority of the world allspice harvest goes to the food industry, for use in commercial ketchups and other sauces.

One of the so-called warm spices, allspice is the star component of Jamaican jerk seasoning, and often features in ras-el hanout, Syrian spice, and the American inventions apple pie and pumpkin spices.

If you prefer to grind your own, five whole berries equal one teaspoon of ground allspice; if you have to substitute, try equal parts cinnamon, ground cloves and nutmeg.

Properly stored in a cool, dry place, allspice will keep for more than a year (whole allspice berries will keep longer, up to three years).

And if it brings you a bit of prosperity and good fortune... well, there's nothing wrong with that. 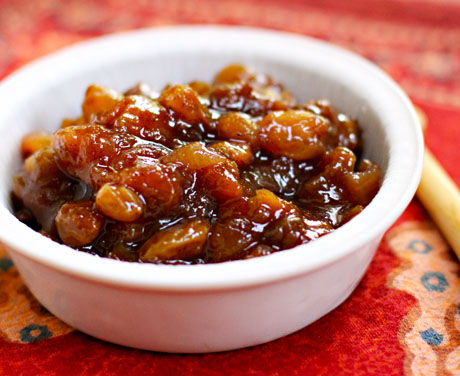 I love chutney; it's sweet and tart and a little bit spicy, a perfect accompaniment to roast chicken, grilled fish or pork, and a condiment for Indian curries. Adapted from Magic Spices: 200 healthy recipes featuring 30 common spices, by Donna L. Weihofen.

In a heavy saucepan, combine all ingredients. Bring to a boil, reduce heat, cover, and simmer 30 minutes, stirring occasionally, until it is thick but still has a small amount of liquid (it will thicken as it cools). Serve warm or cold.

Store in a glass jar in the refrigerator (if using a canning jar, replace the metal lid with a plastic one, so the acid in the chutney won't corrode the lid), for 2-3 months.

Other recipes that use these pantry ingredients:
Gingerbread biscotti with apricots, from Cooking on the Side
Rhubarb, beet and blue cheese salad, from Mostly Foodstuffs
Rhubarb apple bread, from Two Peas & Their Pod
Spiced rhubarb compote, from Cookin' Canuck
Syrian eggs scrambled with rhubarb, from The Taste Space

LOL. I love your spice re-organization system! My mum grew up in Jamaica, on her grandparents' farm and allspice was their main crop. As a result, I grew up eating plenty of allspice and I absolutely the adore the flavor. Your chutney sounds like the perfect thing to serve over chicken, fish, pork...the list goes on.

Oh that must taste delicious. All spice is one of my favorite spices.

Cookin' Canuck, I didn't know you had Jamaican heritage! What a wonderful culinary tradition you've inherited. Allspice would have been unheard of in my mother's kitchen (too adventurous), but I've come to love it in my own cooking.

Ben, try this chutney on a turkey sandwich, or maybe wrapped into a black bean burrito?

Great recipe, I can't wait to try it, I've been on a chutney making binge for a few weeks. I've never seen or used allspice berries...have to check them out.

This sounds so good! I did not know all that about allspice .. very cool!

Sue, there are lots of chutney recipes here, with tomatoes, nectarines, apples... hope you find more that appeal to you.

Jane, I love ingredients with good stories, and it's fun to share those stories here.

I love the new spice sorting system. I really should try making chutney; I've never really even eaten it much.

Are you working on the new herbal? According to the list, it will have 4 chapters...

I love the new spice system!!I think I should do mine that way!
Allspice is the small but secret ingredient to great Venison stew! try it sometime.

Love it! I use allspice all the time, but I have never made a chutney before, sounds great!

Kalyn, isn't this a fun way to think about spices? Ted loves chutney, and I like to make it (throw everything into the pot at once, and let it cook).

Susan, I want you to be my co-author!

Carol, I think I've only had venison once in my entire life. Seems that, with all the deer living around here, it should be more popular.

Shawn, how do you use allspice? I'm always looking for new recipe ideas.

This was so easy and made delicious chutney! I used ripe apricots from a friend's tree and halved the vinegar.

This is the second time I make this recipe, I was dreaming of having it with pork chops and couldn't resist, a real delight