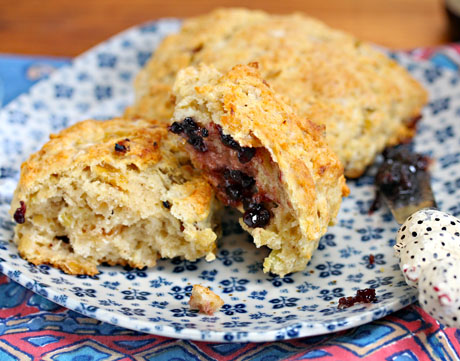 The more I wander back in the archives of this blog, the more I find recipes I never photographed or haven't cooked for far too long. Sometimes I start to make one of these dishes, and I realize I can improve on the original recipe. Other times, things seem just perfect the way they are.

One thing today's freshened-up posts have in common: great use of pantry ingredients. 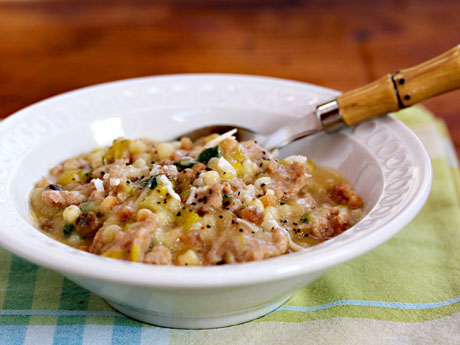 Fregula sarda, a toasted Sardinian pasta that looks like giant pearls of couscous, adds nutty, chewy texture to any recipe. In this one-pot dish of fregula sarda with leeks and sausage, you can use either mild or hot Italian turkey sausage; just make sure to buy one seasoned with plenty of fennel seed. Squeeze the sausage out of the casing, sauté with leeks, add the fregula and liquid, a bit of Parmigiano-Reggiano cheese, and swoon. 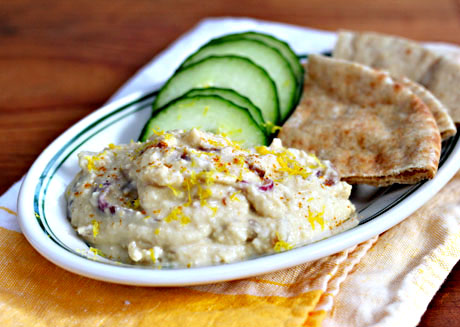 When I purchased my very first food processor, back in the Stone Age, I took it for a test drive on my first batch of hummus. Many hundreds of cans of chickpeas later -- and at least half a dozen food processors down the road from that tiny Cuisinart -- I make this lemon onion hummus, shot through with caramelized red onions, more often than any other. To me, it feels like a combination of two favorite dips: traditional hummus, and that French onion dip we all made from the packet, in the days before we had food processors.

Mushy bananas have their place in any kitchen, and when you're lucky enough to have them (in other words, you've forgotten to use them for something else, and they're mushing before your eyes while they languish on the counter top), try this recipe for raisin-banana scones, in the top photo. Apart from the bananas, you're likely to have all of the other ingredients in your pantry, ready and waiting. Scones have a reputation for not holding well beyond the first day, but they freeze well.

i want that hummus!!!

Interesting, I've never heard of Fregula sarda. Can you purchase it at the regular grocery store, or is it mainly in specialty markets?

Susan, it's an eclectic mix!

Vanillasugar, this is absolutely my favorite hummus variation. It has tang and texture.

Zesty Cook, unless your local market has a large Italian food aisle, you might need an Italian market (or online source). I think some Whole Foods markets carry fregula also.

It's a good thing that you revisited your old posts. Or else I wouldn't have seen this delicious raisin-banana scones recipe. The photo looks great and the scones looks tasty.

I am so glad you are going back and pulling up and resharing recipes we may have missed. All three of these are fabulous! Mmmm can't decide which I would rather have right now. That Lemon Onion Hummus is stunning and making my mouth water. And the pasta dish looks delicious. oooh and I have to make scones now. Fab! Keep doing this!

all three very delicious but the hummus so perfect for upcoming summer entertaining!