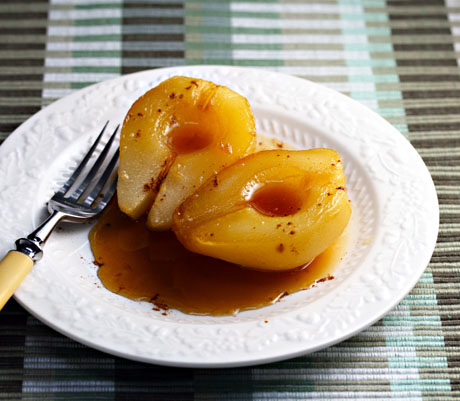 When my Canadian relatives arrive for American Thanksgiving next month, I want to spend lots of time visiting with them instead of working in the kitchen. My strategy this year involves slow cookers, putting all three of mine (3-, 4- and 7-quart) to work. In the largest cooker, I'll make black bean and sweet potato stew, a colorful vegan main dish. The 3-quart might be perfect for gravy, and the 4-quart for a dessert to serve alongside the got-to-have-it pumpkin pie. Kathy, my cooking assistant, and I are testing several dessert possibilities, and we think these poached pears in caramel sauce are a winner. They're simple and elegant on their own, which is how I like them, but a scoop of vanilla ice cream or whipped cream on top will melt the heart of even the most die-hard pie fan.

In a 4-quart slow cooker, stir together the sugar, ginger and butter.

Peel the pears with a vegetable peeler. Cut each pear in half lengthwise, and use a melon baller to remove the core. With a sharp paring knife, remove the stem and trim the bottom.

Gently toss the pears with the sugar mixture in the slow cooker, and layer them cut side down.

Set the cooker to HIGH, cover, and cook for 2 hours, until the pears are tender when pierced with a knife. (Open the cooker once during the cook time and gently spoon the sauce over the top pears.) Turn the cooker off, and with a slotted spoon, remove the pears to a bowl.

Pour the caramel sauce into a small sauce pan, and bring to a boil. Reduce the heat to low, to keep the sauce at a simmer. Shaking the pan fairly constantly, reduce the caramel sauce by one-third of its original volume (don't let the caramel get too dark, or it will have a burnt taste), 2-3 minutes.

Place 1-2 pear halves per person on individual plates. Spoon a bit of sauce over the pears, and sprinkle with cinnamon. Serve warm.

Other recipes that use these pantry ingredients:
Sour cream pear cake with pecan streusel, from Pinch My Salt
Crockpot pear and ginger applesauce, from Cookin' Canuck
Low sugar and whole wheat apple-pear cake with cinnamon and pecans, from Kayn's Kitchen
Roasted Brussels sprouts and pears, from  Food Blogga
Pear ginger compote, from Whipped

This is a really smart idea - I always want to make poached pears, but never seem to time it right, and the outcome is always a bit undercooked. I am more than happy to leave it all to the slow cooker to figure out!

What a great way to free up some time around the holidays. The addition of ginger to the caramel sauce would be a lovely match with the pears.

I would love these pears with a yogurt parfait.

Poached pears are so perfect for the slow cooker! I would love to get a smaller slow cooker for Thanksgiving and other such occasions when I'm looking to keep things warm. I have a 7 qt slow cooker which is usually way bigger than I need.

wow! what a simple but amazing thing! I have to say I am loving your slow cooker ideas and I have even been using mine more as a result!

OMG! Between these great looking pears and the threatened chocolate bread pudding, I'd better reserve lots of hours on your exercise bike when I visit over Thanksgiving!

TW, my goal this year is to make Thanksgiving easier so I have more time with my guests. I'm practicing a lot of dishes in the slow cookers.

Cookin' Canuck, I love cooked pears almost as much as I loved cooked apples. And while I do like pie, I'm just as happy eating the insides and passing up the crust.

Kathy, I love my 7-quart, but the size I use most is the 4-quart oval. Less than $20 at the local discount store, and well worth it.

Carol, I'm so glad you're using your slow cookers more now. I am, too, and I'm learning all the time.

Cousin, I'm going to require everyone to run around the house ten times between dinner and dessert!

Lydia, this looks so delicious. I am eager to try it out. I appreciate that you offer a "printer friendly" option on your posts. You're such a great resource and not all sites offer that. It's a simple thing but it helps save paper and time--both precious!

Diana, I'm so glad you find the printer-friendly recipe feature useful. Thanks for letting me know.

Great recipe and looks easy to prepare too. We have 4 Barlett trees and I am always looking for new pear recipes. We can and freeze more than half of the crop for winter use. The ones from the freezer hold up well and can used as if fresh. This recipe will be very welcome and tasty on a cold winter day.

Lovely! I definitely want to try this out...sounds like wonderful flavors! :)

These are in my slow cooker right now Lydia. Smells wonderful. I'm looking forward to dessert.

Kitty, we also have Bartlett trees. Some years we get great pears, and other years just a handful. We don't spray or anything, so the pears are not beautiful, but when they are ripe, they're delicious. You're lucky to have prolific trees!

Barbara, how nice to think of these pears cooking in your kitchen, halfway around the world!

Hi,
This recipe is really hot ! I can't wait for that, really. Thanks for sharing :)