Recipe for baked egg with bacon, spinach and mushrooms 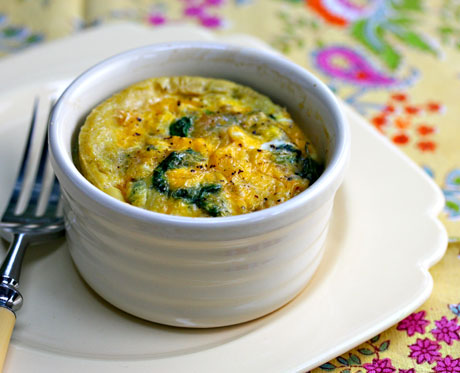 Every morning for nearly 40 years, my father woke my mother by serving her juice and coffee in bed. Every day, even on school days and work days, on holidays and on nothing-special days. Breakfast in bed, however, only occurred on birthdays and their anniversary. For breakfast in bed, who wouldn't love a baked egg with bacon, spinach and mushrooms, and a bit of cheese? This recipe makes two servings, which means you and your sweetie can have breakfast in bed together. You can double or triple or make dozens at a time; pour the egg filling into ramekins, and refrigerate until ready to bake. Then, let the eggs come to room temperature while you preheat the oven. These eggs will wow a crowd, or one special someone. What a way to start the day. 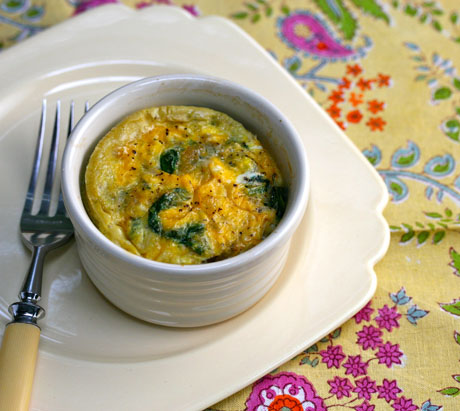 Serves 2; can be doubled.

In a medium nonstick frying pan, cook the bacon over low heat until browned but not too crisp. Remove from the pan, and drain on a paper towel. Leave the bacon fat in the pan.

In the same frying pan, cook the spinach and mushrooms, for 2-3 minutes, until the spinach is wilted and the mushrooms are lightly browned.

While the spinach and mushrooms are cooking, beat the eggs in a mixing bowl, and stir in the grated cheese. Crumble the bacon and mix into the eggs.

Remove the spinach and mushrooms with a slotted spoon, and add to the egg mixture. Season with plenty of black pepper. (You won't need salt, because both the bacon and the cheese add salt to the dish.)

Evenly divide the mixture into the two ramekins. Bake at 375F for 20 minutes.

Other recipes that use these pantry ingredients:
Spinach and ricotta frittata, from Food Blogga
Baked eggs in bread bowls, from Noble Pig
Baked eggs and herbs in portabella mushroom caps, from Poor Girl Eats Well
Broccoli cheese breakfast casserole, from Kalyn's Kitchen
Breakfast baked eggs in half pint jars, from Food in Jars

I'll bet something like this would warm up nicely too, for a late night snack.

TW, not only would it warm up, but you can pop the egg out of the ramekin and store in a ziploc bag for a day or two.

Your parents are so lovely! How dear of your dad to take breakfast in bed for your mom. I love stories like that. Now, can I grab the delicious ramekin, Lydia? Eggs are such favorites of mine! :D

You are making me tear up!! :) How splendid of your father, and mother - to have such a relationship - what an example to you!!

I WILL make this soon for my dh -- but there is NO way he would ever eat or serve breakfast in bed...a wee bit neurotic about food out of the kitchen area. Ah - well, there's plenty more to be thankful of about him. ;-)

Patricia, I wish that tradition continued in my house, but I take after my dad, who was a bit insomniac, so I'm always the first one out of bed!

Eko, how about breakfast on the porch or in the garden, or on the couch? Actually I just think it's romantic when my husband makes coffee for me in the morning, so breakfast could be anywhere if it's a special little casserole like this one.

I would love a veggie version of this without the bacon :)

EB, sounds good. What time shall I be there?!

Rachel, bacon or no bacon, equally good. You could add more mushroom, or chunks of cooked potato, too. Presentation is everything.

That sounds great. I looooooove eggs and spinach together. Your parents sound like real lovie-dovies. :-)

Were your dad and mom named "June and Ward" :-)

Just came across this breakfast again and had to say how much I love it! Egg, bacon, spinach and mushrooms are a staple breakfast combination in my house. Hope I get this as a breakfast in bed soon...we'll see ;)