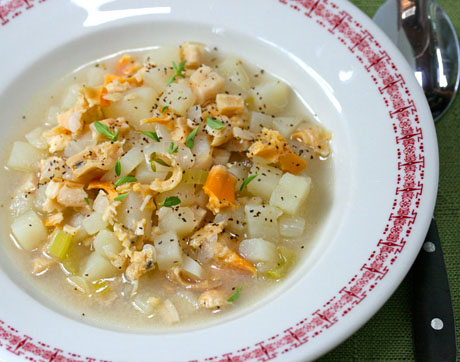 Rhode Island folks love their clam shacks. Most of these summer-only operations sit along the south coast on Narragansett Bay, with names that hint of the mythic grandmas' closely-held recipes that set one apart from the other: Flo's, Evelyn's, Aunt Carrie's, Iggy's. Though from time to time you might find a "modern" dish on the menu (and by modern, I mean something that's not fried), you can order two items wherever you go -- clamcakes and chowder. The clamcakes, balls of dough filled with chopped clams, range from ethereal to canonball. And while some shacks sell more than one variety of chowder (pronounced chowdah hereabouts), they all offer Rhode Island clear clam chowder, the local specialty.

Now's the time to get to know your local fishmonger. For much of the year, you can buy shucked clams and fresh clam broth at the fish market. If you crave chowder in the middle of winter, don't despair. Canned clams and bottled clam broth (combined with chicken stock in equal parts) make a very fine substitute. And, because there's no cream in this chowder, you can make it ahead and freeze it for up to three months.

For the clamcakes, stop in at one of Rhode Island's iconic clam shacks. A cold Narragansett beer will make this meal just about perfect.

This recipe, which first appeared on Soup Chick®, serves 6.

In a Dutch oven or heavy stock pot, melt the butter in the oil over low-medium heat. Add the onion and celery, and sauté for 2-3 minutes until the onions are translucent. Stir in the diced potato, then pour in the clam broth and thyme leaves.

Bring the soup to a boil, then reduce heat to low and simmer for 10 minutes or until the potato is soft when pierced with a knife. Using a wooden spoon, smash some of the potato against the side of the pot, and stir into the broth to thicken it slightly. Add the clams with any juice, and cook over low heat for 5 minutes. Season with salt and pepper, and serve hot.

Other recipes that use these pantry ingredients:
Clam shack-style fried clams, from Leite's Culinaria
Bouillabaisse, from Simply Recipes
Wicked good clam chowder with thyme and ale, from Wicked Good Dinner
New England clam chowder for harried, landlocked cooks, from One Perfect Bite
Linguini with white clam sauce, from That's Not What the Recipe Says

I love clam chowder. I don't like the red version (can't remember which is which!).

Pam, the red is the Manhattan chowder. We hardly ever speak of it here in Rhode Island!

When I visit the North East I always look on the menus in restaurants to see if they have clam chowder. I love it a lot. Never made it home yet. Thanks for the recipe.

Yum. We love clam chowdah and I've not made it in a while. Really like that your version isn't loaded with fat :) Nice version.

Helnee, I think most every restaurant has some type of clam chowder. Often it's the New England chowder, which is cream based (and my personal favorite). Here in Rhode Island and in parts of Connecticut, this clear chowder rules, but you rarely find it anywhere else.

Kellypea, I like this lean version, too. Sometimes the clear chowder has salt pork, but I don't think it needs it.

Interesting! I've never seen the "clear" version of chowdah. Maybe I need to take a field trip to Narraganset.

I wonder... if you just got fresh clams, steamed them open in a little white wine, you'd have clam broth and clams in one fell swoop with little effort.

I had this once in Rhode Island and loved it! I like the thick creamy kind too (of course) but this was lighter for summer.

Mmmm...love the looks of your Rhode Island clam chowder. I wish I could try a spoonful right now! We have a few places around here in Florida that serve some pretty good New England clam chowder. The clear broth makes it a little fresher!

I'm from CT and the RICC is my favorite. Hands down. I always make sure to have a few bowls whenever I go back home for a visit.

Julia, spoken like a true chef. But the broth you buy in the market has that clear, ocean taste that makes our chowder so good.

Kalyn, people are passionate about chowder around here. My local clam shack does sell the New England chowder too, but mostly I see people going for the Rhode Island chowder.

Lyndsey, your local fish market can probably give you some clam juice if they sell fresh clams. Hope you can try this.

Kitten, yes, you *know* how good the clear chowder can be. I love this version, even without the traditional salt pork. Hope you will, too.

Wish I had had some of that when I was down there. I ended up getting some clam chowder to go at a local South Dartmouth place that was a floury-creamy mess. Way too rich, not enough clams.

I grew up in this area and there is nothing better than a cup of Flo's clam chowdah, some clamcakes and fried clams!! YUMMY! Though my Mom's chowdah is my favorite. Similar to your recipe, but no celery and she uses salt pork:)

Looks simple and fresh. I'm going to make it and get some corn on the cob!

For anyone outside of southern New England who wants to try clear clam chowder, a reasonable version is sold at Legal Seafood as Lite Chowder. But of course, homemade is ALWAYS better!

I've had red and white but never heard of clear... I think I would really like this one... I know I'd like the little eateries that serve it!

Thanks so much for the link :-)

Elise, clams are key. This chowder needs a high proportion of clams to potatoes.

Debbie, I think Flo's is pretty great, too. It's the kind of clam shack that never lets you down.

Mary, want company? That sounds like a perfect summer dinner.

Cousin Martin, the Legal chowder is delicious. Not the real Rhode Island thing, but delicious. (Their New England chowder is my absolute favorite.)

Katie, I know you'd like our local clam shacks. Can you get clams in your part of France?

Dawn, you're so welcome.

Wonderful and delicious looking recipe, Lydia. I think I wouldn't be able to help but "California-ize" it by adding fresh corn and sweet red bell peppers. Would that be too sacreligious? ;)

Christine, it would, indeed! But both would be great additions to the soup. In fact, I've featured several corn chowders here and on The Perfect Pantry. Of course, once you start adding more sweet ingredients, you might need a bit of hot, too. A few red pepper flakes, perhaps?

ahh the great "clam chowdah" debate! There was no clam chowder in my house growing up except for the red "Manhattan-style" from Campbell's that dad favored! (He was from California so what can I say!)
but my husband LOVES all clam chowders and someday I will make this variation for him! THANKS!

Carol, I remember that red chowder in a can, too. I hope your husband loves this one -- not a tomato in sight.

Visiting for a month in Newport. The first three days we have been to Flo's Clam Shack twice already. It has the BEST chowdah. The taste is the best. My favorite is the clear but I like all of them. Fish and Chips r the best too. Lobster roll yummy. We will be back many times before the end of the month. MY FAVORITE RESTAURANT!!!!!!!! Florida you need one too.