Spoon Stories: Brian and Wilson on the Serengeti, and an unexpected spoon sighting 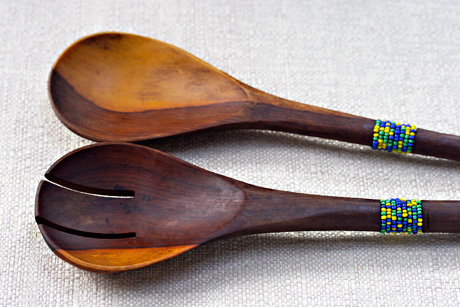 My stepdaughter Kim, who spent two weeks this summer visiting environmental projects in Kenya, brought me these lovely hand-carved spoons. (Can you tell that we are ridiculously proud of her? She is the creative, energetic and engaging science teacher I wish I'd had in grade school.) I'm so grateful for the thoughtful gift of wooden spoons, and especially for the gift of this story to accompany them.

This summer I was lucky enough to receive a travel grant from my school for a two-week tour of Kenya with the Green Belt Movement, founded by environmental and peace activist Wangari Maathai. Dr. Maathai's work in Kenya focuses on re-forestation, food security, and civil action. Her staff work to get traditional and indigenous food onto the plates of Kenyans, solving issues of both poverty and environmental degradation. Part of the program my colleague and I took part in included a fantastic safari through four national parks, including the Maasai Mara on the border of Tanzania, a place teeming with unreal beauty.

During our stay at a safari lodge in the Maasai Mara, our guide took us on an early morning Maasai village tour. Like the Lakota on the Great Plains, the Maasai tribe steward a beautiful global resource on the Serengeti. And, like the Lakota, they are also a group of people striving for cultural preservation.

Photo of Manyatta village from Wikipedia.

Our tour began with a strange monetary negotiation, wherein our driver and the village chief gestured towards each other as though they were discussing the morning paper for 15 minutes, ending with our driver returning with a price for our visit. After the cash was handed over, the members of the entire village prepared for a "show." Not unlike a tourist's version of a Pow-Wow, Maasai wore traditional gear and worked at tasks emblematic of their rural subsistence tradition, including a lot of beading and carving. Not far off in the distance we saw aluminum homes fitted with electricity and running water, and it was unclear how many members of the group traversed the two worlds.

The chief of the village was a charming, buck-toothed man named Wilson, who acted as our translator and guide. We were treated by the young men of the village (warriors, or morans) to a traditional dance, a beautiful jumping contest, and songs that reminded me of the deep sounds of heartbeats and Tibetan throat singers. 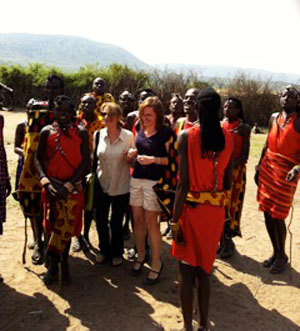 After talking with the young men about their traditional rites of passage (killing a lion, living on the plains for several years), we learned some of the women's traditions as well. Chief among them were the construction of dung huts for polygamous living, how they managed open fire kitchens in their windy world, and how the intricate bead work done by the village women provided much of the funds they rely on. We were allowed inside a small dung hut to see how the huts, like Doctor Who's TARDIS, are remarkably "bigger on the inside" and hold many rooms, and occasionally a goat.

After the tour, we met some village teens. A kid named Brian (Brian, Wilson. Was there a Beach Boys fan in the village?) told me about his dreams of going to medical school after learning that I am a science teacher. I have no doubt he will get there.

At the end of the tour, Brian and Wilson led us into the center of the village where, surrounded by a fence of long rough poles strewn with gorgeous Shuka clothes, we were trapped in a "no way out" gift shop, smartly designed with a narrow entry/exit. We were led past 20-30 shaded booths overflowing with goods made by the villagers. Brian was assigned to be my middleman, and I was really unsure of what to buy to support the village. Large wooden giraffes, beaded crowns, beautiful dangling and bold earrings... I circled the huts twice, resulting in some visibly disappointed sellers. 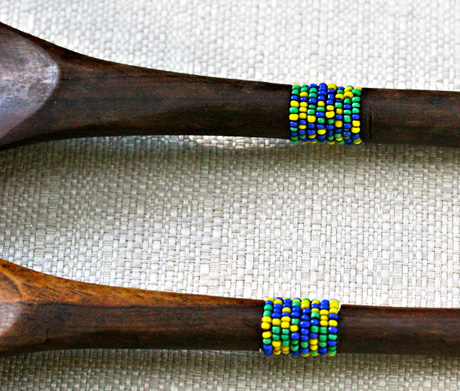 Then my eyes landed on an unusual item, only available in one small booth -- a pair of beaded wooden spoons! I immediately thought of Lydia, and happily negotiated for them. Leaving for my van, I remembered The Perfect Pantry and realized that I had just experienced a good spoon story.

You have every right to be proud of this amazing young woman!

Oh, these spoons are fantastic (love the simple bead work) and the story is even better! :-) Huge kudos to Kim for her efforts to help others and improve our world! I could relate to the story and photos more than usual because one of my best friends just returned from safari in the very same areas. (It was a similar situation ... her daughter was in Africa for work and a safari got tagged on with family and friends joining in for that part of the trip.) So I've seen her amazing photos, heard her tales, and am now the proud owner of a beautiful bracelet made from cow bone! Interestingly enough, her Maasai guide was also named Brian. She spoke very highly of him. I wonder if it's possible if it was the same fellow. It's such a small world, you know? I'll share this post with her and see what she says.

The spoons are really remarkable, and I love getting the accompanying spoon story from Kim!

What a great adventure,

I now have to relate a story that occured after the "9-11" event.

The Maasai sent to the US some cattle for us to help with our devastation. The cattle are their prized and wealth possessions.
They could not understand how one could die from jumping from a building, as they are only around 12 Ft. high.

I love this family of our humanity.

I love the spoons and especially the story. I really enjoy this series, Lydia.

Thank you for sharing your trip to Kenya - I enjoyed reading about the issues they are facing, the village tour, and how you came upon these lovely spoons for Lydia, so thoughtful!

That is a terrific story and really beautiful spoons! Wouldn't that be cool if the friend of Shirley @ gfe and Kim had visited the same "Brian"!!

What a great experience and some gorgeous spoons!