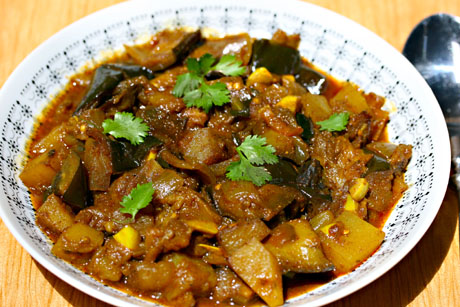 In summer, we soak our feet in cold water, swim in cold lakes, and eat cold food to cool us down. People raised in hot countries -- equatorial countries -- know better; they eat hot and spicy food, which encourages perspiration, the body's natural response to too much heat. Cooks have a few options to keep the heat down in the kitchen, too: grill outside, or use a slow cooker indoors. This Punjabi eggplant with potatoes cools you down in two ways; it's made in a slow cooker, and contains just enough chile pepper to get your body's natural cooling system going. Adjust the heat level to your own taste. When you get eggplant in your CSA box or at the farmers' market, try this recipe served with rice, or topped with some plain yogurt or raita. 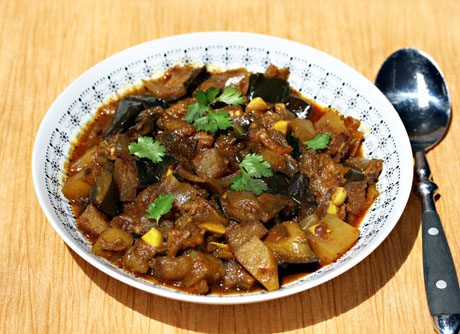 Slightly adapted from The Indian Slow Cooker, this recipe serves 8 (can be halved).

Combine eggplant, potato, onion, ginger, garlic, jalapeño peppers, cumin, ground chile pepper, garam masala, turmeric and oil in a 4- or 5-quart slow cooker. Stir as best you can to distribute the spices and oil. (The smaller cooker will be frighteningly full, but don't worry; the eggplant will cook down.) Cook on HIGH for 2 hours, stirring after 1 hour.

After the first two hours of cooking, stir well. There should be a nice amount of moisture in the cooker, and the eggplant should have collapsed a bit. If there is plenty of liquid in the pot, continue cooking on LOW for 30 minutes, uncovered. If there's not much liquid, cook on LOW for 30 minutes with the cover on.

Add the salt and cilantro, to taste. (Salt added during the cooking will draw more moisture out of the eggplant, so it's best added at the end.)

Serve at room temperature, over rice or topped with raita, or make ahead.

Other recipes that use these pantry ingredients:
Tatsoi with garam masala, from Andrea Meyers
Vegan garam masala cookies, from Everybody Likes Sandwiches
Masala turmeric squid with coconut cream, from Rasa Malaysia
Roasted eggplant with a yogurt-turmeric sauce, from Fearless Kitchen
Grilled halibut with cumin and lime, from Kalyn's Kitchen

Oh, I thought that was meat a pork or beef perhaps but it's an eggplant! This is such a healthy dish, I would want to try this at home. Thanks for sharing this!

Hi. Looks great. Is there something else I could use instead of buying garam masala?
Thank you.

I think I have to try this with sweet potatoes! (And I have those Japanese eggplants in my garden.)

Awesome! My husband is Indian and we love Punjabi food! I'm just not very good at making it :) Can't wait for our eggplant to be ready to pick in our garden. This will be perfect!

I'm saving this to make when I return home from Portland. Such great spices!
I agree about eating hot, spicy food when it's hot out. I drink hot tea almost every afternoon when the temps soar. It has a very cooling effect.

Berneda, garam masala is a blend of nearly equal amounts of cumin, cardamom and coriander, plus black pepper, some cinnamon and cloves. So to substitute for it in this recipe, you can use what you probably already have on your spice rack, and improvise to your own taste.

Kalyn, sweet potatoes and Japanese eggplant would be a perfect combination. Send me some when you make this?

Amy, I'm jealous of anyone who has eggplant in the garden! You'll love this dish; it's super easy.

Christine, counterintuitive though it seems to me, eating spicy food really does cool you down. After it heats you up!

Makes me hungry, and I just finished eating. Beautiful!

Susan, this is your kind of dish, and you can dress it up or down. Enjoy!

I love Indian food, and eggplant is one of my favorites. Another nice slow cooker recipe and I like that it can be enjoyed at room temperature, perfect to keeping cool during the summer.

Looks delicious. This will be great topped with yogurt.

I have it in the crock pot right now, but after 4 hours on high, it's still not soft enough. What am I doing wrong?
Thanks,

Elina, you're not doing anything wrong -- each slow cooker is a bit different, so just keep cooking!

Hi! Just found you and love love love your recipes! Just needed to clarify the amount of eggplant in this recipe: 10 to 12 cups ? Thanks!

Haifa, yep! It cooks down a lot.

It's been in the slow cooker for over 3h and it's still not soft. My eggplant hasn't gone down that much either. It looks pretty dry (yours looks like it has some kind of "sauce"). I'll keep cooking like you advised a previous poster. I can't wait. It looks soooo yummy!

Hello! Sounds like a lovely recipe. Are you peeling the eggplant? Or is the skin edible?

Christina, I do not peel the eggplant. The skin is edible and gets quite soft in the cooking.

I'm making this tonight for the second time and I just have to say that it's delicious! We love Indian and Pakistani food but its not an easy cuisine to master. This crockpot recipe makes it so easy and so yummy! Thanks for sharing! Can't wait to try some of your other recipes. :)

I was inspired to try this to help blast through a sinus thing that has turned my husband's taste buds off for an entire month. I feel so bad for him! We had it over brown rice with a Troegs Perpetual IPA (yum) and some roti. I liked it very much, he could taste it at least a little bit.

So, I made some substitutions.

1st - I used a Dutch Oven (Le Creuset) - I don't have a slow cooker. For anyone adapting to a Dutch Oven, these are the adjustments that I made:

Cook at 325F degrees for 1 hour - stir after 1st half hour
After 1 full hour, stir again, then another 20 minutes in the oven, covered

I also added water since Dutch Ovens tend to be drier than a slow cooker - about 2/3 cup.

For this reason also, salt before cooking (not after, as in the slow cooker recipe)

Some other things I changed, not cookware dependent:

I didn't have the biggest eggplants, so I diced a nice organic zucchini and threw that in to bulk it out. Worked well. After tasting the dish, I think okra would also work well as an addition.

I did not have jalapenos handy, however, I have my own dried red chilis, so heat/spice was no problem.

Lastly, I threw in 1/3 cup raw cashew pieces for the last 20 minutes of cooking time, and that was a quite tasty addition. It really bulked out the dish for a main meal, since we're vegetarian.

There is one spice I feel is missing - something podlike/seedlike that I've encountered at better indian restaurants that I do not know the name for. It is a seed (white?) that has an almost lemony, pickly taste. Wish I knew what is was!

Thanks for the great blog - go Little Rhody!

Thanks for a tasty recipe! I did end up adding a can of drained, rinsed chickpeas to soak up some of the salt. For me it was a bit too salty and spicy, so next time I plan to omit the salt and use just one jalapeno, and maybe cut back on the cayenne as well. I also found some apricot jam or mango chutney really balanced out the flavor. I served it over brown Basmati rice cooked with chicken broth and a few cardamom seeds.

Thank you again for posting this. Much appreciated!

Christine, only if you use small Japanese eggplants will you get a 2-3 cup yield. Use regular eggplants of good size.

This is perfect, I just added one TS Mango-Powder, because I like indish dishes a little bit fruity. My family loves indish and punjabi food, but we did not know the combination eggplants with potatoes. I make often chickpeas with eggplants, and next time I will try the spices from this recipe for my usual eggplant-dish. Thank you very much for sharing this recipe. :D

Unfortunately, this didn't turn out like I hoped. Surprisingly not as much flavor as I wanted. Plenty of spice though. Maybe I didn't add enough salt. Also, this took way longer than 1.5hrs. I cooked it for 4hrs on high, but the eggplant still didn't seem cooked all the way through and it was late at night by then so I cooked it for another 10hrs on low. Luckily, I don't think this is a dish you can overcook.

I made this recipe and have to say... I agree with Kiah. It needs more oil or something to give it a more even texture. I too had to cook it at least 4 hours on high before it broke down to a good state. Great start, but I think it needs to be tweaked a bit. Thanks

Coukd it be cooked on low for longer ?