A bite of fruit offers just the right punctuation to a rich meal, and we're lucky that here in Apple Valley, we can buy local pears, kept in cold storage and sold at farm stands and our winter farmers' markets. The recipe calls for maple extract, which I don't keep in the pantry and didn't want to buy, as we would use only a quarter teaspoon of it. Instead, my husband Ted substituted maple syrup; to keep the dish completely sugar-free, he could have used vanilla extract, but we loved the maple flavor. You can top the pears with a bit of sugar-free whipped cream or ice cream or frozen yogurt; if you do, make sure the pears are warm when you add the topping, as it will melt into the sauce in a most tantalizing way. And, as for peeling or not peeling... well, that's up to you and the variety of pears you choose. Me? I don't peel. 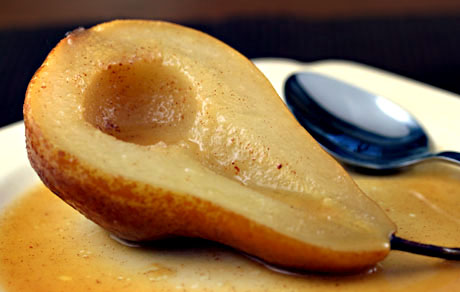 Ted made these beautiful baked pears using a recipe adapted from The Splenda® World of Sweetness: Recipes for homemade desserts and delicious drinks. At a dinner party last weekend, we served a Moroccan chicken, prune and almond tagine, spiced with cinnamon, and this dessert carried the flavor through to the end of the meal. We topped the pears with no-sugar-added vanilla ice cream. The few halves left over were delicious as is, right from the refrigerator. Serves 6-8.

Preheat oven to 375°F. Spray the inside of a large casserole dish with the cooking spray.

Wash the pears. Cut in half lengthwise, leaving the stems attached. Use a melon baller to remove the core. Place cut side down in the casserole dish.

In a small bowl, combine the Splenda, lemon juice, butter, cinnamon and maple extract. Spoon the mixture over the pears, and turn the pears to coat them on both sides. Place them cut side down again, and pour the orange juice around the pears.

Bake, uncovered, basting every 10 minutes with the juices in the pan, until the pears are tender when pierced with the tip of a sharp knife, 40-45 minutes. Serve warm or at room temperature, drizzled with the pan juices.

Other recipes that use these pantry ingredients:
Low sugar and whole wheat apple-pear cake with cinnamon and pecans, from Kalyn's Kitchen
Brandy baked pears, from French Kitchen in America
Pear tart, from The Sporadic Cook
Baked pear and cinnamon, from Jane Spice
Pear crisp with vanilla ice cream, from The Pioneer Woman Cooks

This is my kind of dessert, Lydia. Perfect!!

That looks so refreshing and tasty right now!

I have found that the DaVinci brand of sugarfree pancake syrup is the best of the type on the market. Artificial? Yes but for those who must eliminate all added sugars from this recipe, I recommend substituting this syrup and orange zest for the orange juice and maple extract.