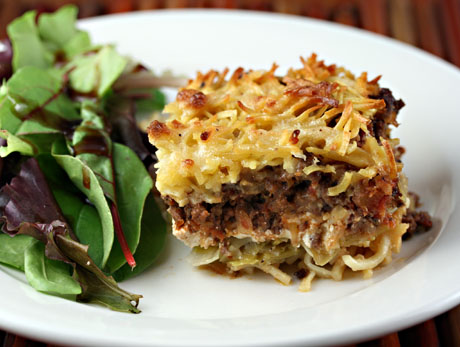 Every now and then, when I'm very lucky, a super special ingredient finds its way to my pantry. Last week, Laurie from Mediterranean Cooking in Alaska sent me a box filled with wonderful foods from Greece, including handmade cheeses, olives, thyme picked from a hillside overlooking the sea, and hilopites -- short, skinny egg noodles made by her cousin. (If you've been reading here for a while, you know I've never met a noodle I didn't love with all my heart.) The noodles resemble those used in Middle Eastern rice pilaf, or fideos, or small toasted strands of angel-hair pasta, all of which can substitute if you can't find hilopites or aren't lucky enough to have a Greek cousin who will make them for you. Hilopites (pronounced hee low PEE tes) -- which can be square, or wide, or long and flat like linguine -- are delicious in soup, in tomato sauce, as a thickener in stew, or on their own, tossed with a bit of butter and cheese. I've been having a great time experimenting with them.

According to Laurie, hilopites traditionally are made once a year, between July and September, when the weather is hot enough to dry the dough and there's an ample supply of fresh eggs and sheep's milk. Please visit Mediterranean Cooking in Alaska for photos that show the process of making these noodles by hand.

Is this Pantry Special new to you?

Where to buy:
Christos Marketplace (500g/$3.99)
Amazon.com (various packages and prices)
[Note: I haven't seen noodles quite like the ones Laurie sent me for sale from any online vendor. Most of the noodles sold as hilopites are square. If you find the thin ones, please let me know and I'll update here.) 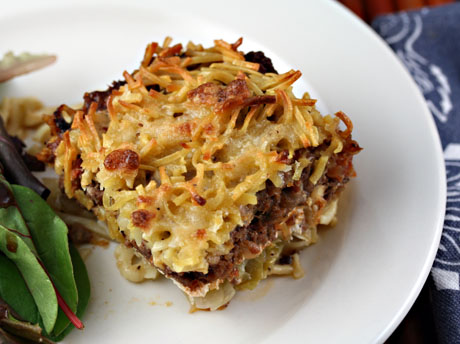 As this was my first time cooking hilopites, I turned to Mediterranean Cooking in Alaska and found this recipe. My only prior experience with moussaka is more traditional, with a meat sauce made of ground lamb, and eggplant as the vegetable layer. I love this version; the meat sauce is seasoned with Aleppo pepper, one of my favorite spices, and mint, which I still have in abundance in the herb garden. The noodles form the base layer and also the crunchy crust on top. If you don't have hilopites, substitute pilaf noodles or angel-hair pasta broken into one-inch pieces. I made just a few changes to the original recipe, which you can find here, and sped things up by using the food processor to chop the onions, celery, garlic, and Parmigiano-Reggiano cheese. There are a lot of steps in the preparation, but assembly is quick, and the moussaka absolutely worth the work. Serves 8, with a green salad.

Make the yogurt filling: Place the yogurt in a mixing bowl. Purée garlic by mashing it into the salt with the flat of a knife or in a mortar and pestle. Mix the puréed garlic into the yogurt, and set aside.

Make the meat sauce: In a large sauce pan or small stock pot, heat the oil over medium heat. Add the meat, season lightly with salt and black pepper, and cook, stirring frequently and breaking up any clumps, until it is nicely browned. Add the onions and celery and sauté until the onions begin to brown. Stir in the garlic and Aleppo pepper, and cook for 1 minute. Stir in the crushed tomatoes and white wine and bring to a boil. Cook rapidly for five minutes, stirring constantly. Turn the heat down to medium, and simmer for 15-20 minutes or until most of the liquid in the sauce has evaporated. Taste and add salt and freshly ground black pepper, as needed. Stir in the mint and take the sauce off the burner.

Cook the noodles: Add the noodles to boiling salted water and cook until they’re half done. (Because the noodles are small, they cook quickly.) Drain and set aside.

Make the leeks: *Trim the root end off the leeks, and cut off the leaves just at the point where the white part of the leek begins. (Save the trimmed leaves for soup stock.) Cut the leeks lengthwise, and discard the outermost layer. Cut the rest into 1/2-inch dice and place in a very large mixing bowl. Fill the bowl with cold water, and swoosh the leeks around to loosen any dirt. Let sit for 5 minutes. In a nonstick frying pan, heat the oil. Gently scoop off the leeks, without disturbing the sediment that has settled to the bottom of the bowl, and add the leeks to the hot pan. Season lightly with salt and pepper, and sauté until the leeks are soft.

Make the topping: Whisk together the eggs, cream, a little salt, black pepper, and 1/3 cup of the grated cheese.

Assemble the moussaka: Preheat the oven to 400°F

Bake for 50 minutes. Let cool for at least 10 minutes before cutting into pieces with a very sharp or serrated knife.

I'm always amazed at the pantry items you discover, and thanks for the pronunciation guide! Does the sheep's milk give it a different flavor, or a certain tang?

What an awesome gift package to receive from Laurie! Glad you liked the hilopites, there are many shapes and you should try them all!

The Leek Moussaka has me hungry this morning.

I love moussaka -- I just made it with eggplant last week. Funnily, my leeks are just ready to harvest, so I could try this recipe soon!

I wonder if they have these noodles at our local Meditteranean market. I will now keep my eyes open.

How I wish I lived nearby so I could pop over for a taste of this!

I'm intrigued! Can you believe Kansas City doesn't have a good Greek market?! Indian food markets? Up the ying-yang, but Greek food? The closest thing is a Middle Eastern market at City Market, and their selection is very limited. I would love to make this at home though. Thank goodness it can be recreated with basic staples & not specialty items alone!

Thanks for this...I love the look of the dish. I want some now!!!

TW, Julia: I couldn't really discern a tangy flavor from the sheep's milk. Maybe my palate just doesn't pick it up. But these handmade noodles were delicious and I'm so grateful to have them in my pantry. Now I want to try the storebought ones I've found online.

Bellini Valli, if you have a good Mediterranean market, I'm sure they will carry some shape of these noodles.

Kalyn, wouldn't that be fun?

Sandie, maybe your Middle Eastern market will have these, or can order them. I'm going to investigate at the market I go to in Providence, too. Most of what I've found online are the square shape noodles, not really the best for this moussaka (pasta is a better substitute).

Candy, this is a real delight. I will make it for you some time this winter.

Oh, Lydia, I'm so happy you had fun playing with the ingredients, and that you liked the Leek Moussaka. That particular shape of hilopites may be special to Limnos, which is a rural island without a lot of visitors, so may be difficult to find outside of Greece. Or you could make them yourself...!

I am with you - I never met a pasta or noodle I didn't love!

Fantastic recipe, Lydia! I am going to pay a visit to our local Greek market and ask if they have these.