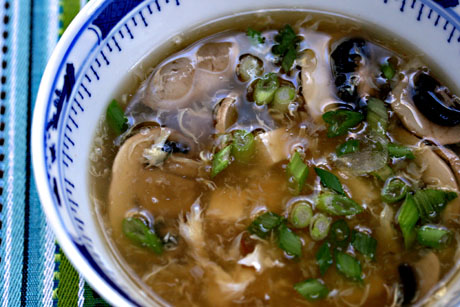 When I was in high school, I did my homework and made good grades in English, history, geography, Latin and math.

I did pretty well in science, too. Right up until junior year chemistry.

As a food writer, I'm sorry now that I didn't "get" chemistry. If I did, I'd understand some of the science of baking powder/baking soda, cornstarch/arrowroot, and why cream of tartar helps beaten egg whites mount.

Thank goodness for Harold McGee, Shirley O. Corriher, and Alton Brown, all of whom provide great explanations for these mysteries of food science.

I'll bet they did well in high school chemistry. 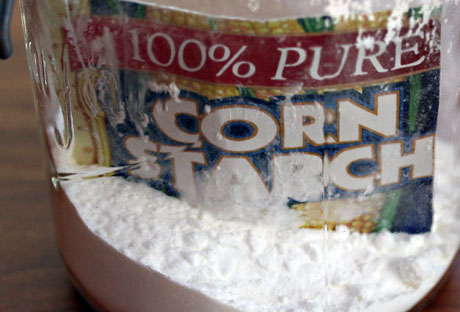 Cornstarch (also called cornflour) is a white powder ground from the endosperm of the yellow corn kernel.

A gluten-free alternative to flour, it's used primarily as a thickener. Gluten reduces the thickening power of flour, so you need only half as much cornstarch as flour to thicken the same amount of liquid.

Most often, for thickening stews and stir-fries, I reach instead for the arrowroot on my spice rack (I substitute equal amounts of arrowroot for cornstarch), but more recipes for baked goods call for cornstarch.

Why? According to Harold McGee, "Arrowroot and potato starches come from below-ground storage organs, cornstarch and flour from seeds, and the two different kinds of sources produce starches with different qualities. Briefly, the root starches have larger granules and longer starch molecules that gelate and thicken at lower temperatures, and are more efficient at thickening, but that break down on prolonged heating or freezing: so you need less root starch to thicken, but the consistency isn’t as stable. Root starches also have a more neutral flavor than seed starches."

There are a couple of tricks to working with cornstarch in cooking. Generally cornstarch is added to a sauce in a slurry -- mixed with a liquid (water, stock, etc.) -- to prevent lumps from forming. I use one tablespoon of cornstarch to three tablespoons of liquid.

Cornstarch begins to thicken when heated to 203°F, and it thickens quickly, turning from milky white to transparent. When the slurry turns clear, stop stirring, as any agitation will interfere with the setting (thickening) process. If the starch network that sets and traps the liquid doesn't have time to congeal, liquid is released and thins the sauce.

If you're adding cornstarch to a sauce (or pie filling) and it does not thicken, try adding more liquid, not more cornstarch. Counterintuitive, I know, but the problem could be that there wasn't enough liquid in your slurry to allow the starch granules to enlarge to their full capacity.

You can add cornstarch to flour to make cake flour, and cornstarch is just what you need for dulce de leche cornstarch shortbread cookies, but I don't bake often, so most of the time I use cornstarch to thicken (sauces, soups, etc.).

While you can store cornstarch almost indefinitely in an airtight container, the quality will degrade over time. If your cornstarch is old, you might need more of it to yield the thickening power your recipe requires.

How much more, exactly? How old? I don't know.

Ask someone who did better than I did in high school chemistry. 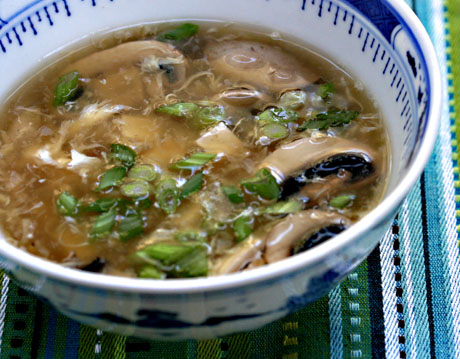 Adapted from Great Food Fast, this is the first soup I've made where the flavor deepens when the soup rests for a couple of hours before serving. Serves 8 as an appetizer, 6 as a main.

In a large stockpot, combine the broth, soy sauces, red pepper flakes, and 2 cups of water. Bring to a boil over medium heat. Add the mushrooms, reduce heat to low, and simmer, until the mushrooms are tender, 10 minutes.

In a small glass measuring cup, whisk together 3 Tbsp rice vinegar and the cornstarch. Add to the pot, and simmer, stirring, until the soup is slightly thickened, 1 minute or so.

Drizzle the egg slowly into the pot, stirring with a fork to break up the egg into shreds as it hits the hot liquid. Add the tofu, and stir. Remove the pot from heat and let it sit for a minute.

Place the ginger in a small sieve over the pot, and press down on the solids to allow the ginger juice to fall into the soup. Add the remaining tablespoon of rice vinegar, and season the soup with sriracha, to taste.

Set the soup aside, covered, for an hour or two (or more) until ready to serve. Bring the soup back up to heat. Stir in the scallions, and serve hot.

I'm looking forward to making this delicious soup. Another use for cornstarch: dust your hands with it before you put on your rubber gloves. The gloves come off easier and keep a pleasing, 'dry' feel inside.

Oh wish I had known why corn starch "denatures" when over-stirred when I worked at Tremont 647. I was fired from that job because I couldn't get the custard for the banana cream pie to thicken.

Oh boy! Thanks for the mouth watering recipe. I cant wait to try this out

Thanks for the insight on cornstarch and arrowroot for that matter.
I rarely use cornstarch (opting for arrowroot instead) but I think I will experiment more (starting with the link to those Dolce de leche cookies!) I now know that the slurry formula shouldn't just be arbitrary! and the stirring!! who knew!!!

this is the only way I can get hubby to eat his shiitakes. they are so good for you.
all the asian cooking I do I would be lost without my cornstarch.

I love Hot and Sour Soup but haven't ever made it! Sounds like I should give it a try.

(BTW, I never took chemistry or physics in high school or college - somehow tested out of it - and I have always regretted it because they help you understand so many things about the world.)

The soup recipe sounds delicious: I haven't made it or eaten it in a long time. I once had a recipe that called for dried lily blossoms. I bought a bunch, and realized they were the same as the profusion of orange day lilies in my garden.

I always want Hot & Sour Soup when I'm feeling under the weather. Right now, I feel fine physically, but a little blue FROM the weather. Plus I'm tired of hearty soups and stews. H&S sounds perfect, thanks!

(I didn't "get" Chemistry either.)

Very informative, and beautifully written. Have been enlightened a bit about corn starch flour today.

Never used it much, as it shoots up sugar levels. Not that effective for a diabetic.

I love hot and sour soup. Now I want some.
Great to know you can go 1:1 with arrowroot.

I haven't had this soup in years and I'm a soup kinda' guy. I love the egg drop in it.

Lucia, great advice! I hate the feel of rubber gloves.

Milton, this is a very easy version of hot and sour soup, using ingredients you can find at the supermarket.

Dawn, I guess I'm the same way. I love all mushrooms except shiitakes. Don't know why.

Kalyn, I was lucky to have a great lab partner in chemistry who really helped me through. He would do the experiments, and I'd write them up. Physics, however, was a total mystery to me.

Mae, I can't imagine picking my garden daylilies to add them to this soup!

Rocquie, I think that a soup with a spicy kick really helps banish the blues -- or even a winter cold.

Sri, thanks for reminding me about the effect on blood sugar.

Natashya, I usually use arrowroot, too, but there are times when only cornstarch will do, especially in baking.

Peter, I'm completely hooked on hot and sour soup, and fortunately we're frequent Chinese food eaters in my household, so the soup fits right in.

This looks really good. I read on Twitter (I forget whose) that someone had hot and sour soup today and now I might need Chinese food in the near future. Next time I come over, we need to make this! :)

Lydia, I love coming to your blog and learning, as well as being inspired by your recipes. I never knew this much about cornstarch, although I've used it plenty of times - it was my husband's thickener of choice. Now that I understand it a little more, maybe I'll have fewer lumps, by adding more liquid - whoda-thunk?

And I so wish I had a large pot of that hot and sour soup in my fridge about now - I adore the stuff!

This is my fav soup in Szechuan cuisine.

I think we were similar students, in terms of those subjects we favored. Chemistry was my absolute worst subject - if it had been set in a kitchen, I probably would have been much more receptive!

One of my favorite soups of all time. I am not that much of a cook, but i have to try this recipe.

It's never too late, in high school chemistry wasn't my best subject, now it's my career (winemaking)....the brain changes!!

My lab partner story: he also wanted someone to write up the lab reports, from our fruit fly breeding experiments -- and married me!

About day lilies: I knew someone who dug the roots for consumption, but that was years ago and the details are forgotten. Don't think it killed her, though.

I made this last night, Not bad, but the leftovers I ate for breakfast were really *really* very good. Many thanks

Hot and sour soup is Michael's favorite, and he's begging me to make some for him this week. The recipe we us is the one from Joyce Chen, which uses wood ear mushrooms and dried lilies (aka golden needles).

Thanks for this super-informative post!! Always wondered about the magic of cornflour!