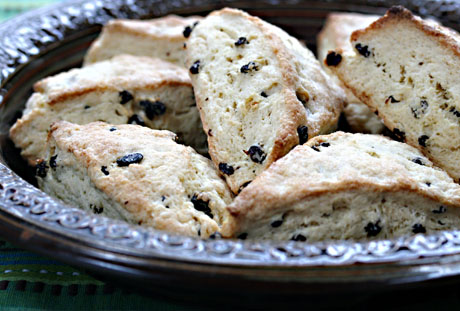 In the house where I grew up, the words sour cream and dollop went everywhere together.

On blitzes. On borscht.

On latkes. Oh, yes, on latkes.

I never knew that you could do anything with sour cream other than dollop it.

In fact, I never really knew much about sour cream.

Similar to creme fraiche or crema Mexicana, sour cream is a dairy product made by adding bacteria derived from lactic acid to cream.

Traditionally, sour cream, which originated in the cold and somewhat nomadic regions of Russia and Eastern Europe, was made by letting fresh cream sour naturally. Today, commercial sour cream results from a controlled process; the bacteria is allowed to grow until the cream is both soured and thick, and then the cream is pasteurized to stop the process. 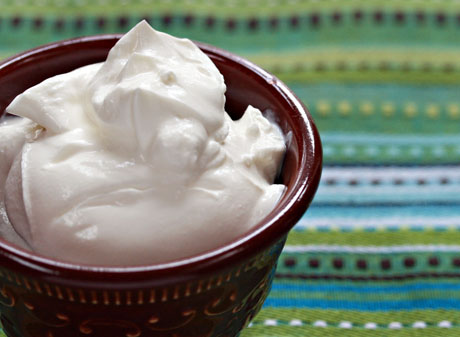 True sour cream must contain at least 18 percent milk fat by weight. Low-fat and non-fat varieties combine nonfat milk with stabilizers like carageenan or guar gum to simulate the density of regular sour cream. They are a bit less creamy than full-fat sour cream, but can be substituted in equal amounts for regular sour cream in most recipes.

Why is sour cream so popular for baking? It's more dense, and less runny, than buttermilk and yogurt, which means that your cake or muffins will be moist, with more body, than if you'd used milk, buttermilk or yogurt (the exceptions are yogurt cheese or Greek yogurt, which have much of their liquid drained off).

According to Joy of Baking, for one cup of sour cream, you can substitute:

In my house, you're most likely to find sour cream stirred into chili, but every now and then, a childhood favorite -- cottage cheese and sour cream topped with banana -- makes an appearance. 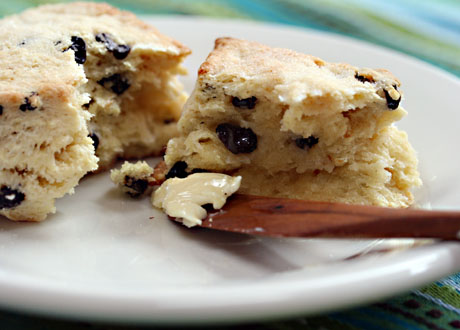 Adapted from a basic scone recipe on allrecipes.com, this is a classic, amenable to any flavorings. I did learn a new technique: freeze a stick of butter, then grate it on a box grater. It wasn't the easiest grating I've ever done, but the end result was worth it as the butter incorporated quickly into the flour. Makes 8 large scones.

In a large bowl, combine flour, 1/3 cup sugar, baking powder, baking soda, salt and cardamom. Set a box grater into the flour mixture, and on the largest holes, grate the butter right into the flour; the end will be hard to hold on to, so just use your fingers or a knife to break it up (hint: if you dip the butter into the flour as it gets slippery to handle, it will be easier to grate).

Using your fingertips, combine the butter and flour mixture until the texture resembles a coarse cornmeal. Then, stir in the currants.

In a small bowl, whisk together the sour cream and egg, until smooth. Using a fork, stir the sour cream mixture into the flour. When clumps start to form, use your hands to bring the dough together by pushing up against the side of the bowl. It will seem like there isn't enough liquid to moisten the dough, but as you keep pushing, it will come together. As soon as it just holds its shape, remove the dough to a lightly floured counter top.

Press or roll the dough into a circle approximately 7-8 inches in diameter, and 3/4 inch thick. Using a very sharp knife, cut the dough into 8 wedges.

Place the wedges on a rimmed baking sheet lined with a Silpat (silicone mat) or parchment paper. Make sure they are at least one inch apart. Sprinkle the remaining 1 Tbsp sugar over the scones, and place the baking sheet on the middle rack of the oven. Bake for 16 minutes, or until lightly golden brown.

Cool for a few minutes, and serve warm or at room temperature.

Oh yum. I am the sour cream queen, love to eat it on everything, especially soup and egg dishes.

I must admit that lately I've been using a dollop of Greek yogurt in place of sour cream because it is so thick. You're right about grating butter - it works great for baking!

We cannot find sour cream here, so thank you for the great tips on replacing it, Lydia!

I've never tried the frozen grated butter technique, but it makes good sense! I'll have to try that.

I just finished eating no-fat sour cream with blueberries + 1 kasha waffle for breakfast. My local supermarket's (Publix) brand of NF sour cream is delicious and a good substitute for Greek yogurt. I don't bake much but I'll definitely keep it in mind when I do.

I've been wanting to make scones lately! I think you inspired me.

I've been into scones lately, seems to go with the territory ;) Yours look divine, Lydia, and I love the frozen stick of butter grated on a box grater tip. I can see why it might be a bit of a hassle, but can also see how it would do the job nicely. Trying it next time I incorporate cold butter into flour, probably later today!

it is time to make currant scones. do you know that I have made a recipe up for curry-currant scones--I need to post that. It was good.

I also think of sour cream being about pierogis (mmmm pierogis!), though these days I tend to use plain yogourt it is never quite the same.

Cardomom in baking is something I love but I have not really mastered yet, these sound delicious.

Sour cream on borscht...my favorite. These scones though sound delicious and I bet the sour cream keeps them moist.

Here in Belgium we don't get real sour cream, but I can use Greek yogurt instead. These sound fabulous--cardamom is currently one of my favorite tastes. I never thought of putting it in scones. YUM!

YUmmmmm Sour Cream! oh those skinny days in my 20s when I could just eat huge globs on everything! now, sadly, I keep sour cream to special occasions.
BTW try one of those "rotary" hand graters - they work well when you have lots of hard grating to do. (chocolate, hard cheese, frozen butter) could you do a lot at once and store extra in freezer?

I used to hate the stuff... blasphemy right?! Now I'm addicted and always looking for new things to do with it.... this looks like a great treat.

TW, I'm such a non-baker that this whole grating butter method was new to me!

Patricia, Kate: glad you can get substitutes for the sour cream. Greek yogurt is perfect.

Julia, Sandie, Carol: I'd never tried grating butter before. It worked so well and incorporated easily. Carol, I do have a rotary grater but have never tried frozen butter in it.

Joan, I want to have breakfast at your house!

Maris, I'm sure you will come up with a wonderful variation on this theme. Chocolate chip scones, maybe?

Lori Lynn, thank you so much.

Susan, I do use sour cream and thick yogurt interchangeably. Live organisms are so good for you, aren't they?

Natashya, EB: I love the full-fat sour cream. I figure if I'm not having it often, I want to have the real thing.

Katerina, pierogis topped with sour cream are wonderful. Haven't had that for ages, but now I'll be craving it.

Noble Pig, the sour cream does keep them moist, and also not too sweet. A great foil for the cardamom.

Those sound & look great. Just curious, has anyone tried to do the butter using the grating disk in the food processor?

Oh, Lydia. Wow. I love scones, they're one of the few baked goods I'll actually occasionally tackle, and the combination of sour cream, currants, and cardamom? Inspired. Thank you.

Lydia, I cut cold butter into small cubes and then freeze it. Then I put my flour in the food processor add the butter and pulse it a few times. The results are about the same. I got the idea from Art and Soul of Baking by Cindy Mushet. I am not sure I could wrestle a stick of butter and a box grater for very long. :) The scones look wonderful!

I had to laugh! It sounds like you and I grew up in the same house, where sour cream was always a dollop - except for sour cream and cottage cheese with bananas. Oh Lydia, you bring back such memories!

And if I had sour cream in the house right now, I'd be making these scones. It's definitely time for a scone...

I've been thinking about scones alot lately, clearly it's time to make this recipe! I used to feel so bad about Sour Cream but then had a nutritionist tell me it's actually a great source of calcium, so I eat it with abandon! Happy 2010 Lydia!

Sour cream makes for the best scones! So moist and yummy. And cardamom - wonderful idea! I've never added it to scones, but it's been my new obsession in the past few weeks. Everything with cardamom just makes the house smell amazing! I don't have any currents, but I'm thinking dried apricots will work well with cardamom. Yum!

Sour cream and buttermilk are great for quick breads like scones. Cardamom is a wonderful spice as well.

Carole, I haven't tried it, but see Barb's comment; she has, by mixing flour in with it.

Jennifer, I'm certainly not much of a baker, so if I can make these, you know they're easy. And I love cardamom!

Barb, thanks for the suggestion. And wrestling is a good word to describe those last few bits of butter on the grater. I ended up using a microplane for the last bit.

Toni, you are the only other person I've ever heard say they like sour cream and cottage cheese with bananas. Are we twins?

Rebecca, I love the taste and richness of the full-fat sour cream, and I'm willing to eat less of it in order to have the great mouth feel. Nice to know I'm getting good calcium, too!

Katie, dried apricots would be great, or raisins, or maybe dried cranberries?

Peter, I do love cardamom! There's something warm and yet exciting about it.

I see I am late with my comment but you took me back! As kids bananas ans sour cream sprinkled with sugar was a staple food. I tried it on my kids when they were young but it never went over
It's also good mixed with cottage cheese and then cut up scallions, radishes and cucumbers in it.

I see you've had a few suggestions of what to do with frozen butter, and I have one more to add:

I grate refrigerated butter and stick it in the freezer for 20 or so minutes. When I add it to the flour it breaks apart easily and magically becomes "pea sized" (as is the desire for scones and biscuits).

So, there you have it. Looks delish.