From Julia (Cook.Grow.Eat.) in Cambridge, Massachusetts:

This is the post that will make you really grateful for the kitchen and pantry you have!

Despite my hardest efforts, I am not independently wealthy. So when I bought this house, I had to make compromises -- I opted for the driveway, garden and separate dining room in a great neighborhood as opposed to the large, functional kitchen. I know, I know, I used to be a professional chef, and the kitchen still didn't rank.

Nine feet by seven feet floor to ceiling. That gives me precisely 7 cupboards (plus one above the fridge, but since I'm short that cupboard gets relegated to rarely used storage). Four are used for cooking and eating supplies -- you know, plates, mixing bowls, glasses, cutting boards, etc.. Which leaves me 3 for the pantry. Honestly, it's plenty for me. If I had kids or cooked with more convenience items, I might need more. 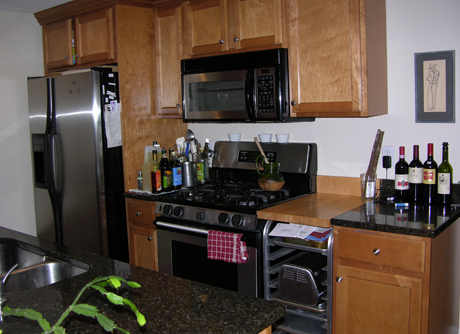 I have the "Asian" cabinet. I cleaned it for you. Because most things I buy from Chinatown come in bags, I ended up storing them in Ziploc bags once they're open. It doesn't do much for pictures, but it's functional. Lots of curry pastes, coconut milk, bonito flakes, seaweed, dried mushrooms, noodles, condiments and starches of all manner. 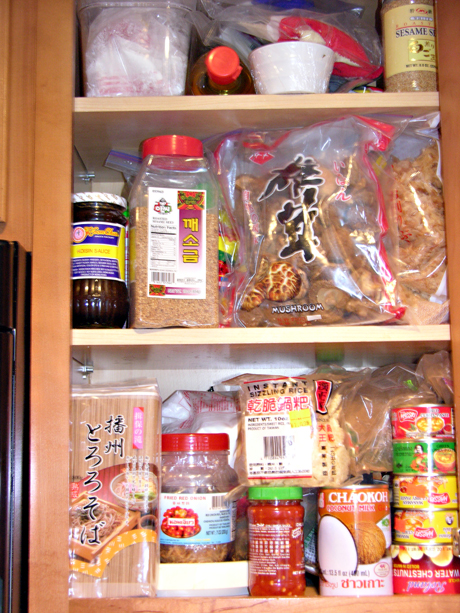 Next is the "baking/Italian" cabinet. Flour and sugar in the bins, plus other miscellaneous supplies. I usually have a pound or two of dried pasta, too, and tucked in the back are a few cans of black and white beans. No canned tomatoes -- the 60+ jars of tomatoes I canned this summer are in the basement. 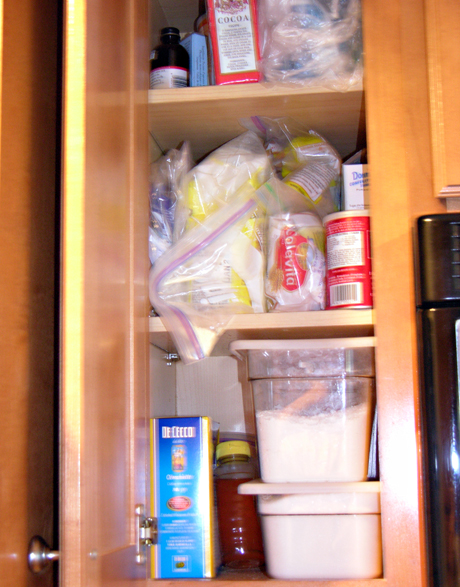 To maximize every inch, I've tucked a few pantry items among the kitchen equipment. Rice lives next to the skillets. And the less used cooking alcohols and vinegars fit snugly behind the mixing bowls. 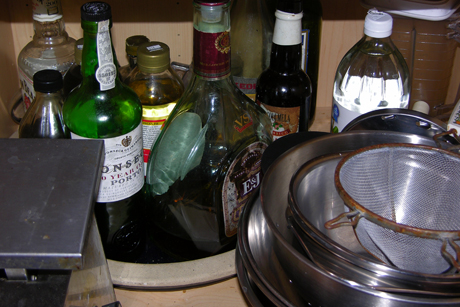 With only four drawers, I had to think carefully about committing one to spices. But with a few utensil bins on the counter, I was able to make the space. 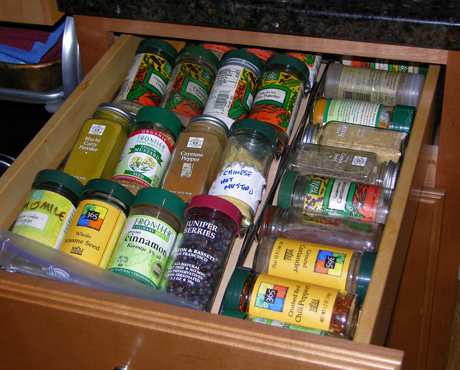 On Saturdays, we peek into Other People's Pantries.

Come on -- show us your pantry.

*Other People's Pantries is booked into late December. If you'd like this feature to continue, please send in your pantry photos. Pantries are featured every Saturday, in the order in which they're received.

So where do you keep the rice cooker? I looked everywhere and didn't see one, with all that oriental food ya gotta have a rice cooker!

I enjoyed your presentation. You also gave me an idea for storing flour. Outside of the pantry your kitchen looks like a lot of fun is had in there. How about an invite for dinner?? lol

You have a lot in that kitchen! Good organization. By the way, the shot looking at the closed cupboards, is very nice.

You are a very disciplined chef to do it all in limited space. With those restrictions, I'm intrigued that you make space for juniper berries -- what do you make with them?

You did a great job organizing for your space. Yours might be one of the only kitchens that I have seen here that is smaller than mine!
I love that you organize by culture, I do that with spices but didn't think of it for other dry goods.

Milton - you must be referring to the line of wine bottles....

Melynda - Thanks! It doesn't feel organized compared to what I've seen from "Other People's Pantries"

susan -- I use juniper in marinades for pork and duck. I'll try and post a recipe soon for it.

Natashya -- I don't think I could do that with the spices because there seems to be too much cross-over. For example, I use cumin in Mexican, North African, Indian and Italian. Same for cinnamon.

Though the lack of storage space is usually a problem, small kitchens can be so efficient to cook in. Less walking, everything close at hand and it forces one to be organized.

looks like home to me, good use of space. I bet you cook some amazing meals.

It's just occurred to me that the Perfect Pantry photo shoots never include the inside door of the fridge where I know a lot of bottled supplies get kept by me. What about it? (I made my own PP list a few days ago, and it includes the things in the refrigerator.)

It may be small, but nicely organized and modern!

What fun to get a peak of your pantry! I wish I were as organized, which is probably why you'll never see my pantry profiled!

Constance -- everything is definitely close at hand.

T.W. -- I'm thinking that the right word is not necessarily "organized" (because that reminds me of Kalyn's kitchen last week) but every has it's place.

Thanks for sharing your pantry, Julia! It's especially fun to see the pantry of people that I already "know". I have a very similar amount of space, so I understand making the most out of every inch. I'm actually glad that I have to keep most of my gluten-free flours in the refrigerator because it frees up more room in the pantry (though things tend to get tight in the fridge when I come home from the store).

Mind if I ask? What is that cart-like thing next to the stove? I can't figure it out and it must be important to take up such valuable space.

I tend to play mind games like "if this were my space, I'd..." I hate giving up drawer space and using cabinets as a pantry. One thing I'd do is put a shelving unit above the wine bottles... maybe for the spices. And perhaps one on the wall next to the fridge.

My kitchen doesn't have a pantry either. I confiscated the linen closet and made modifications to make it work. I was lucky that it was just steps down the hall from the kitchen. Of course that means that my linens (in boxes) compete for space in the coat closet with the vacuum cleaner and suitcases.... but I'm working on that.

The smallest kitchen I've ever had was our first apartment. It was the most organized I've ever been. It was the most efficient layout and was a joy to cook in. (of course that may have been me looking through the rose colored glasses of youth and the joy of actually _having_ my own kitchen).

Katie -- my fridge is jam packed too! Mostly with Asian condiments and a stash of pickles I made over the summer.

SerenDippity -- that metal cart actually gives the kitchen so much more room! It's a speed rack that holds 9 cookie sheets like shelves. You can read about it here: http://www.growcookeat.com/2008/12/where-magic-happens.html

I remember an Oprah episode from last year sometime about people that live in really small (think one was 250 sq feet) homes, so it was really motivating. I try and just be smarter about storage and multi-functional items. Love getting a peek into other people's pantries - thanks for the peek into yours!

Loved the baker's rack next to the oven. That would be very handy when baking large batches of cookies. Even though you are limited in space the kitchen looks very nice and modern.