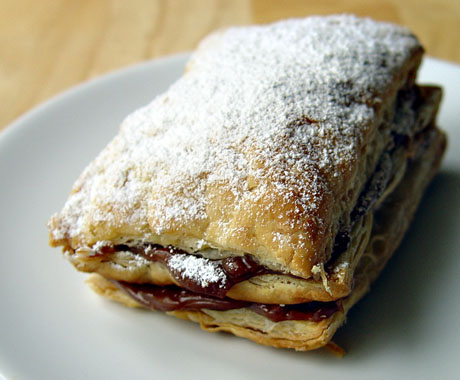 Guest post and photos by Rebecca of From Argentina With Love

Along with tango and Evita, dulce de leche is one of the first things that comes to mind when people think of Argentina.

The sticky, sweet caramel spread plays so beloved a role in the culinary culture in Argentina that, in 2003, the country declared it a "national product" and lobbied UNESCO for official designation -- much to the chagrin of neighboring Uruguay, who argued that they have been making dulce de leche just as long as Argentina has.

Allegedly, dulce de leche was accidentally created on a battlefield in Buenos Aires province in 1829, where two opposing forces met in a camp to make a treaty. General Lavalle entered his enemy’s tent, found it empty, and decided to take a nap. (Truly, nothing can separate the Argentinean from his siesta.)

Meanwhile, a woman who cooked for the camp was making a sugar-fortified milk drink called lechada. She discovered the sleeping General Lavalle in General de Rosas’ tent and, forgetting her cooking, went to call soldiers to notify them of the intrusion. In all the ensuing chaos, the milk caramelized, only to be tasted later by a fearless and very hungry soldier. 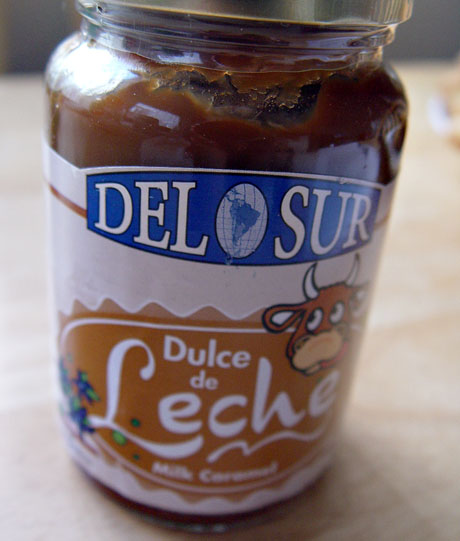 Whatever its origins, you certainly don’t have to be Argentinean (or Uruguayan) to enjoy dulce de leche. In some form or another, it's found worldwide -- doce de leite in Portugal and Brazil, confiture de lait in France, cajeta in Mexico and manjar blanco in Peru.

Dulce de leche is cow's milk (or a mix of cows' and goats' milk) reduced over heat to one-fourth of its volume, which causes the milk to thicken and caramelize. It has found its way into yogurt, ice cream, and even Frappuccinos. It’s enjoyed on toast, and in cookies, cheesecake, crepes and tarts, and could probably even find its way onto a ham sandwich!

The perfect pantry would indeed contain dulce de leche, whether stashed in a suitcase and brought home from a trip, purchased at a local Latin grocery or online, or made from scratch. 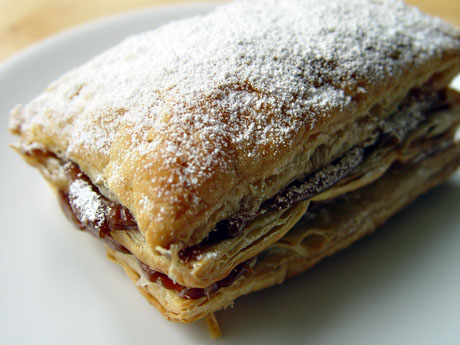 In Argentina, milhojas is a popular dessert, using Chantilly cream or pastry cream between many thin layers of puff pastry (the French call it mille feuille, meaning ‘a thousand sheets/leaves of paper', to describe the paper-thin layers of pastry). In this nontraditional (and unbelievably simple to make) version, I use premade puff pastry layered with dulce de leche. Makes 4 desserts.

Line two large rectangular baking sheets with parchment paper. Unfold the first sheet of puff pastry, and cut with a wet knife along the fold lines (Creating three long strips) and then across the center to make 6 rectangular pieces. Repeat this with the second sheet. Place the rectangles of puff pastry onto the baking sheets about 1 inch apart. Put into the oven and bake for 12-14 minutes, until the pastry has puffed and turned golden in color. Remove from the oven and let cool completely.

Serve with ice cream or whipped cream, if desired.

Oooo I have to give this one a try :) Been playing with homemade dulce de leche a bit lately :)

Dulce de Leche can't get any better than this! We're addicted to a cake that a friend brings back from Mexico. It's an amazing nut and dulce de leche cake. But Rebecca's Milhojas beat's out this cake! Anything with puff pastry wins!
thanks Rebecca for the information and recipe!

Oh my, that looks so good.

I enjoyed the story about the origin of dulce de leche. great story

The recipe sounds delicious! I discovered dulce de leche when I visited Buenos Aires in 2004 and have loved it since. Ann Arbor is lucky enough to have Maite, a local dulce de leche maker from Chile who sells jars of it (as well as alfajores) at the farmer's market. Mmmm good!

Here is the URL for the dulce de leche maker in Ann Arbor: http://www.maitelates.com/

Oh my, I think I just gained a few pounds reading that recipe. Sounds like this would taste mind-blowingly good!

Dulce de leche is one of the true pleasures in life! This lovely dessert puts it over the top! Fabulous!

Those do not look like they would help my waistline, but they are calling me to make them!

Thanks everyone for your comments!
Trinigourmet--this would be a perfect way to use your ddl.
White on Rice--thanks, and see you in SF!
Peabody--thank you
satonahat--I learned something myself!
Deena--you are lucky, thanks for the link!
Kalyn--looking forward to meeting you, too :)
Susan--thanks--it's a snap, too.
Crystal--true, but worth it
fast cooker--enjoy!

Hi people!
I'm from Argentina and, let me assure you, dulce de leche is far more common on milhojas than you can imagine.
I always remember a homemade milhojas my grandma used to make, really big, stuffed with dulce de leche and covered with chantilly cream. Everytime she prepared it the whole family would reunite around the table, expectant, waiting for her (or my Mum) to cut the first slice.
Thanks for a very accurate and lovely post!
Regards from Buenos Aires!!

Love dulce de leche and this recipe looks great to me: simple, elegant and most importantly---tasty!

OHHHHHH I wish I had never seen this post! I had no idea you could purchase dulce de leche in a jar! Now I will just need a jar or 20 and a spoon.

These look like they'd be hard to eat just one of!

Yum, dulce de leche goes well with just about everything but your milhojas recipe looks fabulous!

So decadent, but am I watching my figure before hopping on a plane to SF or are my hips watching me:D

How did I miss this post last year? It looks fabulous!