While I'm visiting one of The Perfect Pantry's guest bloggers, please enjoy a classic recipe that turns gluten-free by swapping black beans for bread crumbs, in an updated post from the archives, with a printer-friendly recipe. 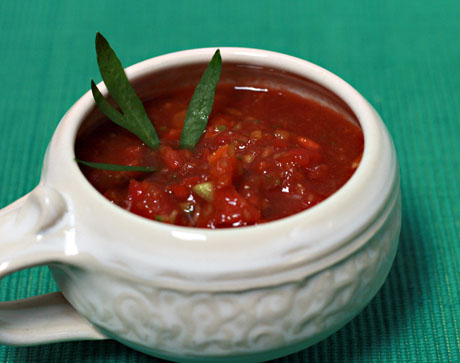 Way back when -- we're talking decades ago -- my best friend Joyce had a boyfriend named Tom, who had a series of uninspired jobs to support his dream of hosting a public-radio show about military history.

The jobs, all odd and of fairly short duration, were entirely forgettable. All but one, which involved the packaging of glass stopper-topped jars, presumably for storing chemicals, as the tops were quite tight-fitting. The jars came in a whole range of heights, from just a couple of inches to, well, spaghetti length.

You see where this is going.

Of course Joyce and I began to stockpile the jars Tom would bring home (Were they seconds or damaged? We never knew.), and we would fill them with pasta, nuts, peppers, M&Ms, and beans and pulses of every imaginable size and color. No matter that we could spend a lifetime soaking and cooking all of the beans we collected. We were "evolving" (i.e., decorating) our kitchens with beautifully filled glass jars.

Of all the beans, my favorite, then and now, are dried black beans. 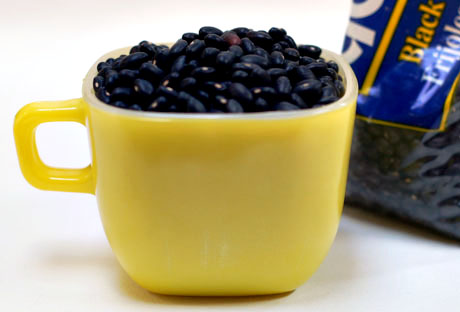 I love that these beans (often labeled frijoles negros on the package) aren't really black, but more of an inky purple. I love that they're called turtle beans, though they taste more like mushrooms than turtles. I love that they are classified as "common" beans, yet they are uncommonly good for you.

Black beans provide a huge dose of dietary fiber, with cholesterol-lowering benefits and the ability to help stabilize blood sugar. Recently I learned that the darker the bean, the higher the level of antioxidants it contains -- and what could be darker than black?

In soups and stews, black beans frequently cohabit with epazote, which gives me an excuse to have that wonderful herb on my spice rack. It's supposed to reduce the rooty-toot-toot, as Julia Child used to say, and to aid in digestion.

Dried black beans will keep for a year or more in a tightly sealed bag or jar. Beans do get stale, so try to use them as soon after purchase as possible.

Here's the traditional way to cook dried beans: first soak them for eight hours, or overnight, in water to cover by several inches; before cooking, remove any stones or beans that look unhappy (often their unhappiness will cause them to float on the surface). Discard the soaking water and give the beans a good rinse. Add to a large stockpot, and cover by two inches with cold water. Bring to the boil, skim any scum, reduce the heat to simmer, cover and cook for 1-2 hours.

My new favorite way to make black beans is much easier -- in the slow cooker. Rinse the beans and discard any pebbles. Place beans in the slow cooker (I make two pounds at a time in my 6-quart slow cooker). Add water to cover by several inches (almost to the top of the pot), set the cooker on low for 18 hours, and you're done.

In my pantry I keep both canned and dried beans. They are not entirely interchangeable; at times, only the texture of dried beans, cooked from scratch, will do. For dips and salads, use the canned beans; for soup or stew, start with dried beans.

And, if you're lucky enough to have a best friend whose boyfriend works in a jar factory, why not start your own bean collection?

Cooked beans, used as a thickener in this dish in place of bread, can be made in the slow cooker and refrigerated for at least a week. Gazpacho is a great make-ahead dish for easy summer dinners. Serves 8.

In a food processor fitted with a metal blade, process bell peppers until finely minced, and add to a large nonreactive (glass, plastic or stainless steel) bowl. Without cleaning the processor, chop the cucumber, and add to the bowl. Cut tomatoes in quarters, and with your finger, poke out the seeds. Add the tomato pieces and beans to the food processor, and pulse until finely chopped. Add to the bowl and stir in remaining ingredients. Adjust seasoning to taste. Refrigerate for at least two hours to allow flavors to marry (taste for salt again before serving). Serve very cold.

beans in all their glory is what i really love. i make a lot of my dried legumes using the pressure cooker. like this recipe a lot!

Lydia, dried black beans are the core of feijoada - you'll find lots of Brazilians who love these beans! :D

I love black beans. One of my favorites!

Love the idea of using black beans as a thickener in this, brilliant! Haven't made gazpacho once this year, need to do it!

Great idea of black beans...glutten free is good for health.

I am always on the look out for good dried bean recipe. This sounds like a winner, Lydia! Thanks so much for the helpful tips.

you know what? I didn't learn until recently that bread/crumbs are often used to thicken Gazpacho. I innocently just thought it was all veggies! I will definitely use the beans as a thickener when I make this (previously enjoyed only in restaurants) delicious dish since I found out a couple years ago that I am allergic to wheat (not Celiac just allergic)and have been trying to stay faithful!

I love all sorts of beans and pulses...but my children don't...is there any way it could be made appetising for them?