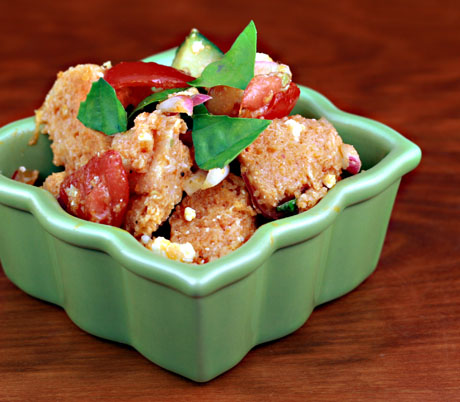 Ten things I know about sherry vinegar (you'll be glad to know them, too): 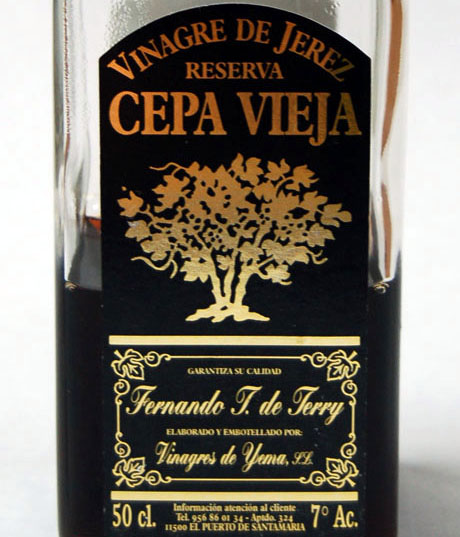 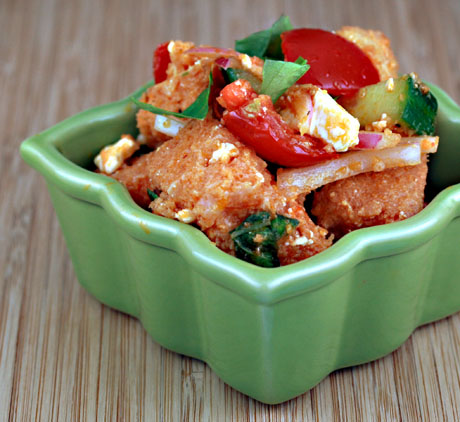 Cut the bread into large (2 inch) cubes and place in a mixing bowl. Soak the onion in a bowl of ice water while you complete the salad.

In a blender, process the slow-roasted tomatoes until they are well chopped. Add vinegar, agave, salt, pepper and 1/3 cup oil, and blend until the dressing is smooth, adding additional oil if necessary to achieve a pourable consistency.

Add tomatoes and olives to the bread cubes, and pour the dressing on top (depending on the actual amount of bread, you might have extra dressing). Stir gently, making sure that the dressing coats all of the bread and begins to be absorbed. Drain the onions and add those to the bread. Add basil, and continue stirring. At the last minute, incorporate the feta.

Serve immediately or pack for a picnic; this salad will improve if it sits for a couple of hours.

Need more creative ideas for using tomatoes all year round? Get 25 Tomatoes, my e-book packed with fantastic recipes, full-color photos and a fun video tutorial. With the FREE Kindle Reading app, delicious tomato recipes will always be just one click away on any computer, tablet or smart phone. Click here to learn more.

i bought a large bottel of sherry vinegar this week (and a wild garlic vinegar) - i usually go for my red wine vinegar but this time thought to try something different. i love it as it is more intense a bit dryer. I loved reading the extras about this. Great and easy summer salad!

This recipe has my mouth watering. I discovered sherry vinegar a couple of years ago when it was listed in a recipe, and now it's finally much easer to find than back then. I just used it as part of a soy vinaigrette for a more mellow flavor.

I'm going to try a bottle of sherry vinegar after reading this. The tomatoes in our garden are nearly ripe...yum!

I wish I still had some of those slow-roasted tomatoes but we eat them up almost as soon as they come out of the oven. That was one of the best ideas you ever had!

I don't know about Orson Welles, but I must admit that the mention of coffee and raisin flavors makes me a little leery of trying sherry vinegar.

I didn't realize that sherry vinegar had it's own Denomination of Origin. Thanks for all the facts on this yummy vinegar!

Many many thanks for the sherry info which until now I didnt know about. By default I've been using the reserva because it's the only one my market sells. Once I started using sherry which I did after reading a bitten blog post, I cannot use any other vinegar....except malt for chips. :)

Again, thanks for all the backround info...you rock!

Now I have to go looking for the Reserva. I have a vinegarette I want to try it in.

Sherry vinegar is the one that I use most - I have a less spendy bottling which I use for quick pickles and to add to cooked dishes, and a nicer version for salads and straight drizzling.

And I agree, these photos are just lovely. Here's to finally seeing some sun in RI!

Amy, I'm completely jealous. My garden tomatoes are still a figment of the imagination, thanks to all of the rain, and lack of sunshine, we've been having in RI.

Mae, my supply of slow-roasted tomatoes from last summer is nearly gone. I cooked at least 10 pounds last year, and it seemed like so much. Maybe this year, I'll add a pound or two.

Sandra, the flavor is rich and complex, and I'm sure you'd like it.

Natashya, I was surprised to learn that the D.O. was relatively recent.

Milton, thanks. I think my readers rock, too.

Janet, around here it's easier to find the Reserva, even though it's a bit more expensive.

Jennifer, same here -- I have more than one of almost every aged vinegar, some for cooking, others for drizzling. (and I'll second that motion about the sun -- wouldn't it be nice?)

Yum. I love salad like this. Gotta make it :)

I made a very similar vinagrette last weekend, haven't had a chance to write it up yet.

Lovely post, Lydia. I've used sherry vinegar for years but never knew this much about it. And now, of course, it's time for some of that salad......

I love sherry vinegar... right up there with balsamic...
Of course, I also love sherry....

I want some sherry vinegar. I keep forgetting to look for it, and then I read about it on another blog and start wanting it again!

Anh, I think you will love this. It's a real classic.

Kevin, I'll be watching for your recipe!

Noble Pig, when your vineyard is producing, will you be making verjus too? That would be great in this dressing.

Toni, sherry vinegar is always in my pantry, but I'm somewhat new to the party. You probably discovered it years before I did.

Katie, and the two vinegars together make a really interesting component in vinaigrettes.

Kalyn, if you can't find sherry vinegar locally, you can buy online from La Tienda or The Spanish Table.

EB, that's what I thought, too.

Gorgeous bread salad! I love the color clarity in your photo. I also really enjoyed reading your info on sherry vinegar. It's so delicious, but that's about all I knew.

we made this last night instead of a regular salad. AWESOME!!!!!!!!!!!!!! It was ^the^ perfect side dish for grilled steak