A week of kid-friendly recipes from the Green Eggs and Ham Cookbook by Georgeanne Brennan. Welcome to Dr. Seuss Week, Day One. 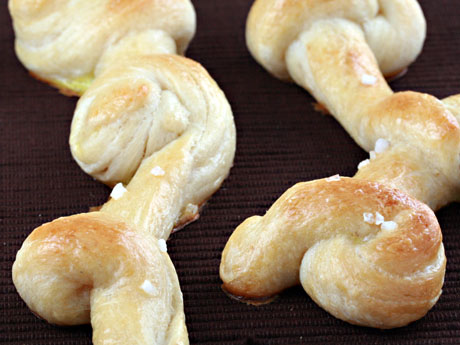 Here's the kind of question Dr. Seuss would have loved:

If the sea is blue, why is sea salt white, or grey, or pink?

Okay, the sea isn't really blue, except in all of the Dr. Seuss books, and in most children's books, and in some parts of the Caribbean where the clear water has an undeniably turquoise cast. Though I've never seen it in blue, sea salt does come in many colors (white, grey, pink, black), depending on the minerals in the region from which it is harvested. 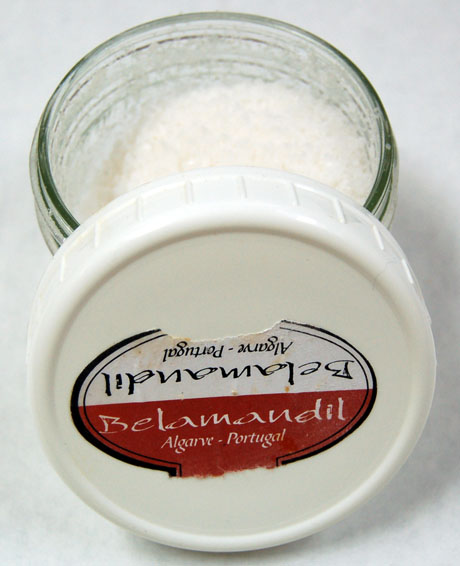 Made by the evaporation of sea water, sea salt is expensive, its high price fueled by popularity, limited supply, and labor-intensive harvesting methods. For example, fleur de sel, considered the best by many professional chefs, supposedly is formed when winds blow in just the right way over the summer sea off the coast of the village of Guerande, in Brittany. It's hand-harvested by workers who comb off only the top layer, the lightest and purest of the evaporate, in a tradition that has not changed for centuries.

If I had room for only one sea salt (golly... just one?), Portuguese flor de sal would be my choice. It's a white salt, beautiful and flavorful, everything you want in a finishing salt. 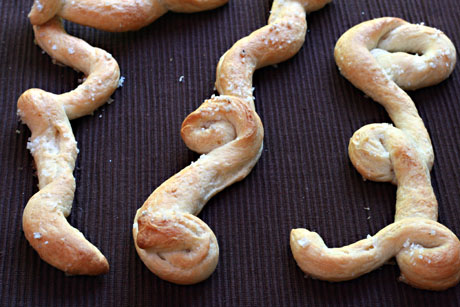 And, while we are at it, consider the Schlottz,
the Crumple-horn, Web-footed, Green-bearded Schlottz,
whose tail is entailed with un-solvable knots.
(From Did I Ever Tell You How Lucky You Are? by Dr. Seuss)

In the top photo, we brushed the "tails" with egg wash; in the bottom, just with water. Either way, they're delicious. Adapted from the Green Eggs and Ham Cookbook by Georgeanne Brennan. Makes 6 long pretzels.

Separate the dough into 12 sticks; then, pinch together in twos, end to end, so you have six long pieces of dough. Roll out one piece of the dough with your hands into a "snake" 2 feet long and as thick around as two pencils.

Tie the dough into loose knots and "dribble" it onto a baking sheet lined with parchment paper or a silicone mat.

Brush each strand with some of the egg wash, then sprinkle on a little bit of the sea salt.

Bake 15-20 minutes, or until golden brown and firm. Let cool on the baking sheets for at least 10 minutes, or longer, so they don't break when you pick them up.

I thought quite a lot of salt came from evaporating pools in places like Bonaire and Curacao. Anyway there's also very cheap sea salt at Trader Joes. Do you know why? Any big difference in quality?

I use Port. salt (Eden brand) for everything. My tastebuds aren't sophisticated enough to discern the difference between the different types of salt or the nuance of how they interact with food. You linked the choice to prime in a previous post and I tried it. I have become hooked on that methodology. What a difference the salt makes to the meat. Lastly, this story about Port. salt was published several months ago which might be of interest:
http://www.nytimes.com/2009/01/27/world/europe/27salt.html?

I've become, unfortunately, a hopeless salt snob. But ever since I've banished table salt from my kitchen (and table), everything tastes so much better. It's a small investment which dramatically improves whatever you make.

As for differences, and which salt to buy, folks should just taste a few grains side-by-side of various salts, and see which one tastes the best to them. And anyone who doesn't think there's much of a difference will be blown away. (And will likely banish table salt from their kitchen as well.)

very lovely schlottz's knots. yeah, I remember I had to pay a higher price for sea salt when I lived in US (... wish the manufacturers also pay good money to those cheap labors...)

Our family loves Dr. Seuss - if that cookbook had been around when we were growing up, we would have been all over it!

I'm all about 'finishing touches', be it a squeeze of lemon, a drizzle of olive oil, etc. and I've been experimenting with flavored sea salts. It's amazing what just a teeny sprinkle does. P.S. Those pretzels look delicious.

Great, informative post on sea salt. I make flavored salts in Seattle using Fleur de Sel from Ile de Re, though I'm experimenting with more affordable salts. Can I tell the difference? Depends on each recipe, or the amount of residual moisture content for each infusion. Interesting, nonetheless.

I can tell you had a lot of fun making the "animal tails." Great post; I love sea salt!

One fish, two fish, red fish, blue fish. I'll have that sing-song in my head all day now. And I have to confess, I've never sprung the bucks for the expensive sea salts. Perhaps this summer. You've inspired me. ;-)

I'm a fan of the pink salt from the Himalayas. It comes from a sea that never saw commercial shipping, oil spills, mercury dumping etc, etc... I notice that the color is paler as the grind is finer. Refraction of light? And then there's Celtic Salt, similar to the Portuguese but dried on clay beds, something of a 'healing salt cult.' There's even salt from the coast of Maine now.
Let's make life more interesting -- and tasty!

Maybe I'm just sentimental today, but what a lovely tale. & those pretzels look delish! I expecially appreciate the egg vs water wash beauty shots. Thanks for a great blog entry & a fun recipe!

My favorite salt would be Slovene sea salt from Piran. It is hand harvested the same way for almost 900 years, from the Adriatic sea, it is by far the best. Here is there web site, http://www.piransalt.com/. Unfortunatly you can't find it here (yet), but anywere in Europe and some Asian countries you can. I always bring it back with me, when I go to Slovenia. I have every salt under the sun, but theirs is by far the best! Slovenia is a small country in Europe, bordering Italy, Austria and Hungary.

Very interesting about the salt.

I'm a salt fan too. We do keep a jar of Fleur de Sel on our kitchen counter and use it daily to finish dishes. For every day cooking salt we use Kosher Salt which we buy in boxes at the super market. Kosher salt has great flavor and is inexpensive.

I was taught this trick by a vendor who manufactures salt and pepper mills (grinders). Dissolve several different types of salt in small glasses of water and then taste. You'll be able to tell quite a difference between ordinary table salt, kosher salt, and sea salts.

We like to use salt and pepper mills on the table. But coarse salt for a grinder can be expensive when purchased in small bottles from a gourmet store. Google helped me locate a great source for bulk sea salts of all kinds (including Fleur de Sel). It's so much less expensive to buy in bulk. Here is a link to the one I found. i'm sure there must be others too. http://www.saltworks.us/

Mae, I'm guessing that the lower price at TJ's probably has to do with economies of scale. They buy so much that they can pay less for it.

Milton, thanks. See David's comment below. The taste test is really the best way to find the salts you like.

David, you're so lucky to have a huge variety of locally harvested salts in France. Another food blogger sent me some amazing gray salt that's harvested in her village; I've been trying to use it sparingly so it lasts forever.

TW, we were huge Dr. Seuss fans, too. I still have many of my old books.

Joan, it's a revelation, isn't it? We're so afraid of salt in this country, but a tiny bit used properly really does affect the overall flavor, of sweets as well as savories.

Janna, there is someone here in RI who imports French sea salt and blends it with herbs from his garden. It's a wonderful thing to have on hand in the kitchen.

Kalyn, I did have fun!

Karina, sometimes a little bit of a fine sea salt will make all the difference. Like fine wine.

Susan, I'd never had the pink salt before this past Christmas, when I got some as a gift. I'm in love with it.

Jenna, Paz: thanks so much.

Lili, I've never heard of this salt, but I love the sound of it.

Dave thanks for the great ideas and salt source; I've actually used them, too.

Very nice post! Sometimes even salt is not just salt, lol. I wanna a taste of those pretzels. :)

I love sea salt! These look like lots of fun- I'll get my daughters to help make them. We love to dip our pretzels in honey mustard.

Ben, you're right. It's really important to taste different types of salt to find oneyou like.

Janice, kids will have a great time making these "knots"! (Adults will, too.)

Veron, Maldon sea salt is lovely and smooth, isn't it? Particularly wonderful for topping on cookies.

Oh yum. I would wear a salt lick if i could. This sounds wonderful.

The Whole Foods near us sells salt loose. You can buy as much or as little as you want, so it's a great way to sample different kinds. I got a smoked sea salt that I love - it's great for adding a smoky flavor to spilt pea soup, chili, etc. when you don't want to use meat/bacon/ham. (One of my sons is a vegetarian, so I have been learning how to add layers of flavor that don't involve meat.)

I love these...they are like "out of control" pretzels!

A comment on the "cheap" salt: This is probably commercial Pacific salt, not unrefined, not sun-dried, as the premium salts are. You can even find this domestic, generic salt with added iodine. ...and sea salt, even though from the sea, is not by itself a good source of iodine. The colors, which you can see better in the coarser forms, indicate the minerals -- anyone know which color/which dominant minerals?

Oh my Dr. Seuss I think will live forever. I LOVE these knots!
I'm just starting to explore salts (maybe 2 years) it is like a whole new world with all the different ones. Salt really does bring out flavor and different ones bring out different flavors - when I really first found that out I felt rather silly, I mean how very obvious and I'd never given it a thought.

Love this post, love Dr. Seuss. I live very close to Guerande and we love our sea salt (especially in caramels and chocolate!).

Your bread knots are great!

Judy, that's a great tip about using smoked salts in place of smoked meats. I do the same.

Peter, they're the best out-of-control pretzels ever!

Susan, I'm sure you're right about the Pacific sea salt. I knew that iodine was added to table salt, but not that it is also added to some sea salts. I'm curious about the different colors of salts and how they correlate to minerals, too.

MyKitchen, can you remember when there was really only one salt -- table salt -- that we used for cooking and baking? It's so great that we have access to all of the wonderful sea salts now.

Jamie, I love the Guerande salt -- a food blogger sent me some last year and I've been hoarding it so that it lasts longer.

Looove pretzels but I always have trouble shaping them. I like how free form these are.

Salt and dough. Pretty much food staples...and together in knot form...yum.