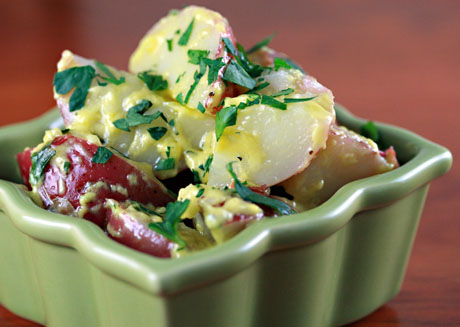 In the kitchen where I grew up, oil was oil.

Not virgin, and certainly not extra virgin.

Oil was vegetable oil, a healthier alternative to the traditional chicken fat, and a pareve (neither milk nor meat) staple, in my grandmother's kosher kitchen.

Hadn't even been invented yet.

In the late 1960s, plant biologists crossed four varieties of rapeseed to create a seed with less erucic acid (which makes oils go rancid quickly) and glucosinolate (which tastes bitter). The oil pressed from this new seed had a lower level of saturated fat, and a higher level of "good" fat, than other similar neutral-tasting oils.

Marketed first to physicians as a heart-healthy alternative oil, canola raced to the top of the charts. However, scientists and growers in Canada (which produces the majority of canola worldwide, though the US, Australia and Europe also contribute) felt that a slight alteration would create a more viable crop.

One protein gene was modified to make it tolerant to some herbicides, the use of which reduced the amount of chemical needed for weed control in the fields. As all proteins are removed from canola during processing, the oil made from genetically modified plants is the same as conventional canola oil; however, some countries have banned the sale of oil made from genetically modified seed. 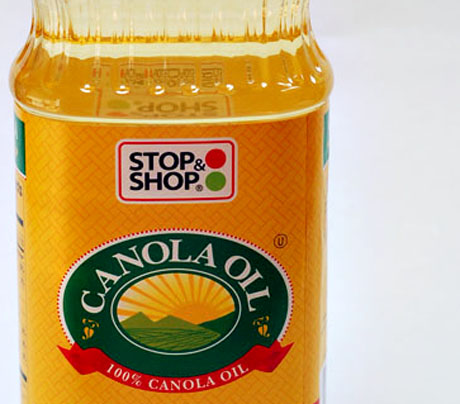 There's been a lot of misinformation published about canola oil, but for cooks watching their fat and calorie intake, canola oil offers many benefits. In addition to being the lowest in saturated fat, canola oil is high in monounsaturated ("good") fat, as well as omega-3 and linoleic acids. Spectrum sells an organic canola oil, available in my local supermarket.

With a smoke point of 435°F, canola oil is in the same range as olive oil, good for sauteing but not as good for high-heat frying as rice bran or safflower oils, which smoke at an impressive 510°F.

Garlic mashed potatoes, without the mashing. Aioli is a garlicky mayonnaise that makes a rich dip for all sorts of vegetables, a flavorful sandwich slather, or a topping for grilled or poached fish. Serves 6.

Make the aioli: Add the egg yolk, vinegar and garlic to a food processor fitted with the metal blade. With the motor running, add olive oil drop by drop, and then the canola oil drop by drop. When the mixture starts to thicken, add the remaining oil in a steady stream, until it looks like a yellow-ish mayonnaise. Season with salt and pepper to taste. (Can be made ahead and refrigerated for several hours. Bring to room temperature before using; cold mayonnaise will not absorb easily into warm potatoes.)

Cut the potatoes into bite-size pieces, and place in a sauce pan with cold water to cover. Bring to a boil over high heat, then lower the heat to simmer and cook for 7 minutes, or until just tender. Drain well, then add to a large bowl. Stir in the aioli dressing, and mix gently to combine. Let sit for 15-20 minutes, to allow the potatoes to absorb some of the sauce. Garnish with parsley, season with salt if needed, and serve warm or at room temperature.

So many people forget the perks of canola oil...It's not all about EVOO. Canola is good for you, too.

thanks for the recipe and the canola info....one learns something new everyday! Has anyone made the aioli by hand and if so is it hard to do? Also, how different is it from mayo? thanks

I agree with cal orey! Canola oil is great. It's definitely my all-purpose oil.

I love aioli. I will have to try this one.

I've never had aioli. It sounds good and I will have to give it a try.

Great recipe! I also enjoyed reading about Canola Oil. Very interesting. I plan to do more research on this. I wish I knew of a light and healty (non altered) olive oil that could be used with most anything except frying. If you know of anything please let me know. Thanks so much!

I've been meaning to make my own aioli. this looks like a good recipe :)

Thanks for your site. I love it! I'll have to get around to photo-ing my pantry soon!!

i love homemade aiola-it is very easy and so much better than mayo from the store which is mostly made with soybean oil. of course, i always make mine with rice bran oil and i add a little dijon mustard.

I just made some anchovie aioli this past weekend for veggie dipping. Never thought to put it on potatoes but I will give it a try.

It looks so beautiful, I absolutely love this dish.

Love your site! Thanks for the info on canola oil. I recently started using canola oil more in my recipes. When I was growing up we used lard for pies and then Crisco in a can. Don't remember when I started using liquid vegetable oil. Now I keep canola and olive oil on hand for my cooking and baking needs. Can't wait to try this recipe. It looks delicious!

I love aioli, I could just eat it off my fingers. The spuds look yummy! Yay for canola oil... says the Canadian...!

So, this is the Aioli you were telling me all about the other day! It looks amazing on the potatoes! I think I'll have to make me some for this weekend. Thanks for the recipe Lydia!

I've been using canola oil for ages; I remember not long after I first started I went home (where they still used corn oil) and discovered that there really *was* a difference in taste. Both are often described as "neutral," but they're not equivalent by a long shot!

My food processor (a tiny one) doesn't really chop up garlic fine enough for aioli. I may have to try the recipe with addition of some time in a mortar.

Love the aioli! I often make it with basil or tarragon to mix with chicken for a lovely summer chicken salad.

Empasize: organically grown canola is not GMO, by definition. Canola is my everyday oil, but I add about 1/3 olive to try for the best of both worlds. And now that my food processor had internal collapse, I am discovering other kitchen toys to fill the gap -- and for some purposes, do it better. Are we toy dependent? A good workout with the whisking arm may be called for.

Your eggs must be stunning; the aioli is so yellow! Are they from home-raised chickens?

I just found out that PAM is Canola oil. Who knew? Also, isn't saying canola oil redundant, if the "o" stands for "oil"?

I haven't eaten potato salad since I lost the recipe for my grandma's weird orange concoction. This might just change my mind! Yum!

I have never tried making aioli before, but you certainly make it sound easy. It's getting to be that time of year when I crave potato salad and I can get farm-fresh eggs from a neighbor.

Cal, Julia: I agree. There are many wonderful oils that are healthy and not as strongly flavored, especially for folks who are allergic to nuts and can't use peanut oil.

Milton, I've made aioli by hand many times, using a mortar and pestle and drizzling in oil slowly over 45 minutes to create a lovely sauce. Garlic is the difference between aioli and mayo.

Melanie, Leslie, Anu, Michelle: Hope you try this. It's an easy version of aioli and quite versatile.

Treehouse Chef, don't know for sure, but look into Spectrum organic products.

Ashlee, would love to see your pantry.

Elle, Food Hunter, Laura: love all of your variations on the basic aioli!

Noble Pig, if you love garlic mashed potatoes, you'll love this. There's plenty of garlic to liven it up.

Helen, canola and olive are the oils I use most frequently for cooking, too. I also keep some very good EVOO on hand for salads.

Natashya, we definitely have Canada to thank for this product (says me, who's married to a Canadian!).

Donna, this is a shortcut aioli, but similar to the one we make by hand. There's nothing like the real thing, but it takes 45 minutes of constant stirring to make that possible.

Sandra, you can try mashing the garlic with the side of a large knife, on a cutting board with some coarse salt. The salt helps break down the fibers in the garlic and will turn it into a paste.

Susan, you're absolutely right about organic oil. And as for whisking? Good exercise, but very hard work! How about a blender?

Jenna, they are from home-raised chickens, but I'm not the chicken-raiser. We have several neighbors who do raise chicks, though.

Quest, yes, it's a bit redundant, but sets the oil apart from the plant, which is also called canola.

Sare, would love to know more about your grandmother's orange potato salad!

Amy, price and availability are two advantages; rice bran oil, which is quite expensive, is not available at any market within 20 miles of my house, and unless you happen to live right near Whole Foods, you're unlikely to find it anywhere in Rhode Island (and I'm not sure that our local Whole Foods carries it). But there is a difference in taste, too. And for recipes like this potato salad, smoke point is not an issue.

Janel, it is easy, and if you use very fresh eggs, it will be delicious.

This looks wonderful! Might serve it for Mother's Day brunch instead of the same old home fries.

that looks wonderful. i'm tempted to re-make "my" pea salad with the aioli.

I just love aioli - the recipe looks so grand - will have to try it. I grew up with "oil" being olive oil (not extra virgin, etc) And Crisco oil made its way to the cupboard... aging myself.

I'd love a cookbook!

Aie, aie, aie, aioli. I've been trying to improve my aioli recipe because I don't quite like the taste. Kept trying things like more lemon juice, less garlic, even tried adding a bit of sugar (didn't work). Yesterday it hit me - it tastes too much like olive oil. Then I stumbled on your post, so I'm defintely trying out your method. Thanks.

I cheated. I made this with mayo and crushed garlic. Served with hotdogs it was amazing. Thanks.

Gourmetmomma, let us know how that works for you. I'm sure it will be delicious.

Kim, I'm a bit of an aioli purist most of the time. No lemon, plenty of garlic. Sometimes salt will make the difference. You can also try regular (not extra virgin) olive oil; it's more neutral in flavor. Keep tinkering!

Milton, hot dogs? I'd never have thought of that!

OMG - we had this last night as a side for dinner - it was wonderful. We did have to change one thing - our local market did not have decent parsley but they had nice cilantro so we used that. It was amazing - thanks for the recipe!

Learn something new every day! I always wondered what a "canola" seed was...