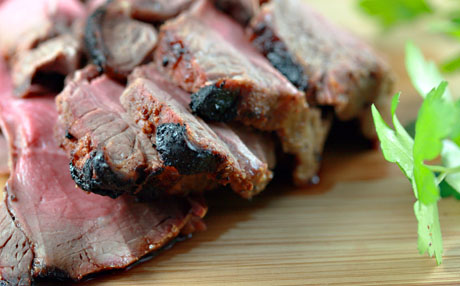 What happens when a good-for-nothing handsome hunk like Mac finds himself in possession of an empty flat and access to three gorgeous air hostesses, Priti, Sweety and Puja?

I have no idea, but you will, if you settle in with Garam Masala, a three-hour, Bollywood movie extravaganza. Indian movies that combine song and dance, love triangles, drama, comedy, and daredevil thrills are called masala movies, because, like masalas — spice blends — they are a mixture of many things.

Visit one hundred kitchens in India, and you'll find one hundred different versions of garam masala, the spice mixture at the heart of northern Indian and Pakistani cooking.

One of the few spice blends used in Indian cooking, garam masala is pungent but not spicy-hot, and it's usually added toward the end of the cooking to bring an extra burst of flavor to the dish. Most often made of whole spices that are toasted and then used whole or ground, garam masala varies from one cook to the next, and from one spice seller to another. 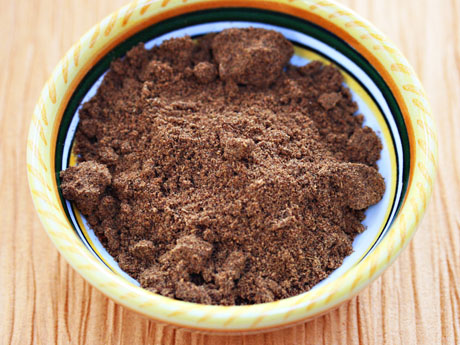 The Penzeys garam masala on my spice rack uses a "recipe" brought to them by a customer who grew up in the Punjab; it contains coriander, black pepper, cardamom, cinnamon, kalonji, caraway, cloves, ginger and nutmeg. Garam masala can have as few as three ingredients, or as many as a dozen or more.

In every kitchen, the masala dabba, a spice box with two lids to keep the contents fresh, holds the key to the family's culinary traditions and memories -- and it holds little containers for seven ingredients that combine and recombine to make the masalas and curries that are a cook's trademark.

By the way, a masala dabba can hold any combination of spices in your own kitchen, even if you don't do a lot of Indian cooking. Mine occasionally has Latin flavors -- cumin, chili powder, pepper, oregano -- or baking spices like cinnamon, ground cloves, and cardamom.

And if you're settling in for that three-hour movie, you could fill the little containers in the masala dabba with M&Ms, peanuts, or jelly beans.

Delicious hot or cold, perfect for a picnic or in pita sandwiches, this recipe, inspired by Indian Food Made Easy, serves 8-10.

Using paper towels, dry the lamb, and set aside. In a large nonreactive (glass or stainless steel) bowl, combine remaining ingredients, and mix well. Add the lamb, turn to coat, and cover the bowl with plastic wrap. Refrigerate for 8 hours or up to 2 days.

To cook, heat a grill (gas or electric, or charcoal, or stovetop) on highest heat. While the grill is heating, take the lamb out of the refrigerator and let it come to room temperature. Wipe off all of the marinade, and discard. If necessary to create a uniform thickness (it usually is not), run some long metal skewers through the meat to hold it flat on the grill. When the grill is hot, cook the lamb for 10 minutes on each side. Then, remove the lamb from the grill and take its temperature with an instant-read thermometer; when the temperature registers 125F (for rare lamb), remove the meat from the grill. Let it sit for at least 10 minutes before slicing. The thicker parts will be rare; the thinner parts will be more well done.

YUM lamb! mm i dont do it often but once ina great while i will make a lamb shank curry for my hubby! I dont do it often cuz it takes hours upon hours to braise the lamb in the ground spices! This looks very nice i will have to give it ago i think the hubby will like!

I recently just had this spice, but not with lamb. Next time I make lamb stew I will throw in a little and see how it goes.

i have always wanted one of those masala dhabbas - but for some reason always have forgotten to get one when i am in dubai! i love the combination with lamb and GM - great recipe!

Yay....I'm back! The "issue" was frustrating and I'm just glad I can post comments again.

The lamb is perfect pink, the spices exotic, the photos - tempting!

I have never tried garam masala, Lydia - but I'm a 'spice girl' and will sure love it. :D

Love this site! Especially the find an ingredient feature. I've been looking for something to hold my Indian spices - thanks for the info on the masala dabba. Now I'll know what to ask for at the Indian market!

Do you think I could use the marinade and roast the lamb in the oven? I just took out a leg of lamb to defrost, but my grilling options are limited right now. However, I'm well stocked on garam marsala.

I love Garam Masala, I found a recipe long ago to mix it myself and I loved it so much I use it all the time. I especially love it sprinkled on top of plain cheese pizza.

I've got the Penzey's Garam Masala in my cupboard as well, and this sounds like an awesome way to use it. Yum!

The movie sounds great (and so does the lamb). Count me as another one with Penzey's Garam Masala in my cupboard - it's a well-balanced mix.

One of the fondest memories I have of my children's preschool experience was when one of their teachers, a woman from India, came to cook Indian food for several preschool families. She brought her masala dabba, as you wrote, which was given to her by her mother on her wedding day. She had brought it to her home in California, and used it every day. Different combinations of spices were used in each dish she made.

Kira, my hubby really liked it. Hope yours does, too.

Deeba, I usually do lamb with lemon and rosemary, but this is a lovely variation.

Peabody, it's especially good on the grill (can you picture me outside in the middle of winter, huddled around my grill? That's what I do!), but also in the oven. The spices smell wonderful when the lamb is cooking, too.

Meeta, I'd be happy to send you one.... they are the handiest things for all kinds of spice storage.

Peter, I'm so glad you're back, too, and just in time for lamb! This is a great flavor combo.

Patricia, I'll bet you have used most of the components of garam masala on their own, though.

Lauri, my local Indian market doesn't sell a masala dabba, but some of the larger markets in Boston and definitely in New York do. You can also find them online through Amazon and Gourmet Sleuth.

Vicki, this lamb was so delicious -- and I'm glad I didn't have to wait until Spring to enjoy it!

Chiot's Run, garam masala on cheese pizza is something I have never tried, but I'm intrigued. Will try it, I promise.

Genie, Laurie: I'm a real fan of the Penzeys blend, too. Isn't it delicious?

Gudrun, my first experience with a masala dabba was similar. I was writing an article about a woman who gave cooking classes to a group of moms she met at a local playground where they all brought their kids. She introduced all of us to the masala dabba, and we watched in amazement as she plucked different combinations of spices for each dish she taught us. I've had a masala dabba ever since.

Lydia, nice post! Reminds me of the Southern India episode of Gourmet's Diary of a Foodie, which I thought did a beautiful job chronicling the food traditions of several families and their masala dabbas.

YUM! You know I'm so dying to try the garam masala on chickpeas. baked that is...

That's it! I must pick up some lamb this weekend! Looks beautiful and that list of ingredients had me salivating.

Lamb and Garam Masala, two of my favorite things! I love this recipe...I'll definitely have to try it out.

Carolyn, I'll have to catch up with that episode -- actually, I missed so many episodes of Diary of a Foodie. Would love to see more masala dabbas in action.

Dawn, chickpeas are now high on my list, and I'm on the lookout for new ways to prepare them.

Aimee, it will be warm enough to grill this weekend, even up north I think. Enjoy!

Jason, it's a great combination. Hope you'll try it.

This sounds delicious! I'm always looking for new ways to cook our homegrown lamb, and I just finally (!) took the plunge and bought a little package of garam masala recently even though I had no idea what I was going to do with it. : )

I always appreciate your posts on Indian-style foods and spices. I don't use them much at home, but I'm interested in learning more. And I must say, that lamb looks mouthwatering!

Susan, be brave and use your garam masala with lots of things: lamb, yes, but also tofu and vegetable dishes, and in curries, of course.

Bee, I've been known to sit through more than one... but also to fall asleep in the middle of more than one! (Doesn't everyone?!)

Sandie, I really consider myself a novice in the Indian cooking department. I hope this is the year I'll experiment more with some of the less readily available spices and ingredients. Indian cooking is so rich and complex, but not difficult.

This was an inspiration. I had everything for the marinade, used 1/2 with a pound of tofu (yogurt was low fat, fennel whole). Just cubed it and let it sit out for a few days in my cool kitchen, then put it under the broiler. Took the leftover cubes and mashed them with a little of the yogurt for a spread on very dark bread; the rest of yogurt went over brown rice and barley to eat cold. Wonderful flavors in every phase!

Susan, you're a rock star! I love how you let the flavors of the marinade travel from one dish to the next. So creative!