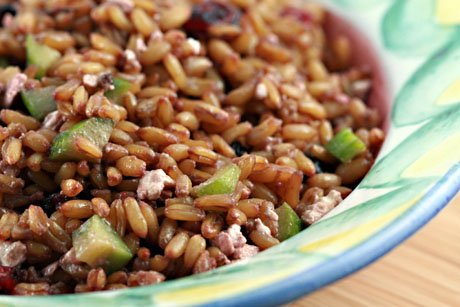 Thanks to a recent pantry-shopping challenge from fellow food blogger TW Barritt of Culinary Types, I've fallen in love with Kamut®.

Here are ten things I know about this grain (you'll be glad to know them, too): 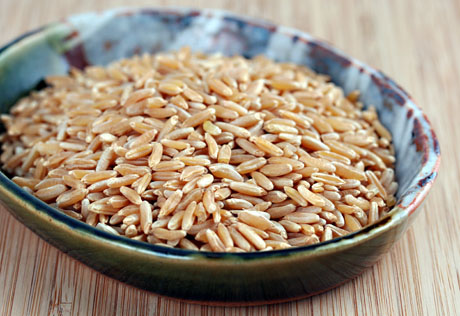 A sweet-tart salad with "tooth", this is a great side dish for a Friday night roast chicken or grilled lamb, or perfect for a picnic or potluck. And, as pomegranates are an aphrodisiac, this might be a good dish to try on Valentine's Day. Serves 6.

Measure, then rinse, the Kamut. Place in a rice cooker with 4 cups of water, and set to cook. Or, place in a saucepan, bring to a boil, cover and simmer for 1-1/2 hours, checking frequently, until it tastes chewy but cooked all the way through.

While the grain is cooking, combine the pomegranate molasses, agave and olive oil in a small jar with a tight-fitting lid. Add salt and pepper to taste. Shake the jar to emulsify the dressing, and set aside.

When the Kamut is cooked (it will be chewy, not mushy), drain and add it to a mixing bowl with the cucumber, cranberries, and dressing. Toss well to combine. At the last moment before serving, add the cheese, toss lightly, and serve.

Need more ideas for how to create salads with pizzazz? Get Dress Up Your Salad, my e-book packed with easy mix-and-match recipes, full-color photos and a few fun videos. Exciting salad recipes from everyday ingredients can be just one click away, on any computer, tablet or smart phone, with the FREE Kindle Reading app. Click here to learn more.

Lydia I love kamut, just hate the cooking time - it takes me 2 hours to cook my kamut!! My organic store offers the grains and usually will mill all grains into flour. I wanted them to mill kamut for me but they were not too keen as they said it was far too hard and were afraid that it will ruin their mill!
It's still not a very popular type of grain here in Germany probably because it takes so long to cook but I find it really is a great alternative.

I love kamut and don't use it nearly enough--thanks for the little nudge! And your description of its taste is just perfect. I bet this salsd tastes amazing!

Kamut was new to me. At first I thought 'interesting - I'll have to try it'. Then I thought "do I really need another carb to love". Lastly, 2 hours to cook? I'm thinking 'not so much'. :)

I bought kamut for the first time last week, and now you've inspired me to try it out immediately! I love wheat berries, so I can only imagine that I'll develop a new obsession for kamut.

Mystery solved! I knew you could do it! And, I think it's fascinating that, like Grains of Paradise, this is another marketing marvel of sorts! I made a broth of mushrooms, saffron and kamut with my purchase. I wasn't sure if I had the "doneness" completely right, but they did plump up very nicely.

I love grain salads. I have never tried Kamut, but I will now. You had me hooked at buttery and nutty! My grocery store has a nice selection of Bob's Red Mill stuff, so I'll have to see if I can find it.

Isn't it funny how the Job Lots Stores carry the best selection of Bob's Redmill products at the best price!? My theory is that they can't afford the shelf space in the big mainstream grocery stores. It is a shame.
anyway thanks for this new food "discovery"

I've never heard of this but...buttery wheat toast is something i can get behind... i'll see if I can find it! :)

Grain salads are wondefully filling. This sounds like a very yummy version.

I love kamut too! I find if I soak the berries over night in the fridge it doesn't take as long to cook. I've thought of sprouting some but never got around to it...

Marvelous salad - feta & cranberries - and then the buttery kamut! Sounds lovely. This I know I can find.

Ooh, I haven't tried this one! (haven't even picked it up on a trip to the city..)
Sounds really good, definitely trying to add more whole grains to the diet.
Thanks for the kamut lesson!

I've never had kamut before, but I love the sound of it (and the salad)! I'll have to see if I can find some by me this weekend.

Lydia-I'm going to try your version of Kamut and cranberry/feta salad. What I do is boil water,turn it off and soak the Kamut in that, the kamut will swell up by the time the water cools. You can either cook it or store it. This works well in the hot summers here (I make this salad often during the summer). I do the soaking thing at night and then just put them in the frig and make the salad later since once you soak usually takes no longer then rice.
I will also combine kamut with wheatberries soaking and cooking both and make a bread with them - I would say that I easily go through about 1-2 pounds a year.

I have never tried kamut, but want to as I know it's wonderful as a grain salad. Cranberry & feta sound perfect together, even though I have no idea what kamut tastes like, I imagine a bit nutty?

I love the sound of this. Never really knew what it was, and didn't know it was low-glycemic either! I have a feeling I'm really going to like it. Will look for some!

Everyone: thanks to CC and Kim for their good suggestion of pre-soaking the Kamut to reduce the cooking time (just like we do with beans). I'm going to try that for my next batch.

Dawn and others: yes, the flavor is a bit nutty and sweet, which makes it perfect for salads, especially with a tart dressing or dried fruit as a foil for the naturally "sweet" grain.

I've also had a question about how the taste compares with wheat berries. Can anyone answer this?

Found in a tomb! How interesting!

That salad looks good! I have been enjoying whole grain salads lately. I will have to look for some Kamut.

That is an ingredient I have never heard - Lydia, I am always learning new things here, darling!

Hello
This is Reem from Egypt.Kamut is one of food widely known & loved in the south of Egypt.It has a nutty flavor and it sure takes long time to cook and what's really interesting that not all the kamut is good kamut "said a southern Egyptian old man"

He also says that only southern Egyptians can perfectly cook kamut.Anyways I live in the north and I cook kamut but I admit that people in upper Egypt cook it much better :)

I'll be glad to share some of our Egyptian kamut recipes

To me Kamut is nuttier and wheat berries to me are more like hulled barley and I tend to use them interchangeably. Also I usually will use wheat berries with something else and never alone, where as Kamut I will use by itself. I also like the "chew" texture of Kamut better then that of wheat berries.
Wheat berries I put with more savory things and Kamut with sweet/tart things

I've got kamut in my pantry and have had no clue what to do with it!

I tried it today, thanks for the recipe Lydia- It really made my salad delicious.

Your kamut dish looks so appetizing! I love evrything with Kamut, even Kamut bread! MMMMMMMM...

Pressure cook Kamut to save time on steaming/cooking the grain or put it in a rice cooker.

Betsy, both of your variations sound fantastic. Thanks so much for sharing with us.

I used Kamut for the first time today. I substituted it for rice in a chicken casserole and it was wonderful!!! I made enough that I'll be able to eat Kamut for my breakfast cereal with blueberries. I look forward to cooking with it on a regular basis.

Kamut is my favorite grain!
Just thought I'd put that out there:)
and If any of you are Washingtonians, the co-op in mount vernon makes this salad and its is delish!

Debbie, it won't be the same, of course, but you could substitute cranberry juice, boiled down to 1/4 its original volume, for the pomegranate molasses, and honey for the agave.

Made dressing with olive oil, honey, balsamic vinegar, and red raspberry sauce that was around. Delicious. Served along with canned red sockeye salmon. What could be bad? Thanks so much!