While I'm busy baking hundreds of cookies for this weekend's Drop In & Decorate® cookies-for-donation event, please enjoy this post from the archives, updated with new photos, links and recipe. 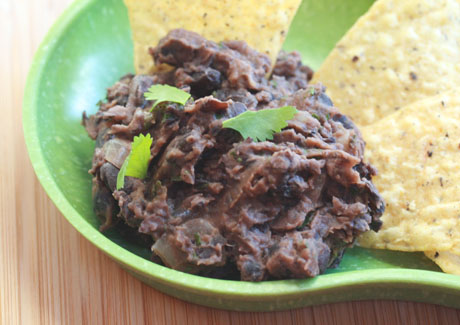 In 1981, the US Department of the Army was "honored" by Taxpayers for Common Sense with their Golden Fleece Award, for spending $6,000 to prepare a 17-page manual on how to buy Worcestershire sauce.

Not to worry, friends; you don't need to read the report. I'm going to tell you how to buy Worcestershire sauce (I'll even tell you how to use it), and my advice won't cost you a penny.

Go to any grocery store in the United States. Look in the condiment aisle, the one that has ketchup, mustard, mayo and canned olives. You'll see an orange box that says Lea & Perrins, and inside will be a bottle mysteriously sheathed in a tan paper wrapper. And inside that wrapper you'll discover a bottle exactly like the one in my pantry. 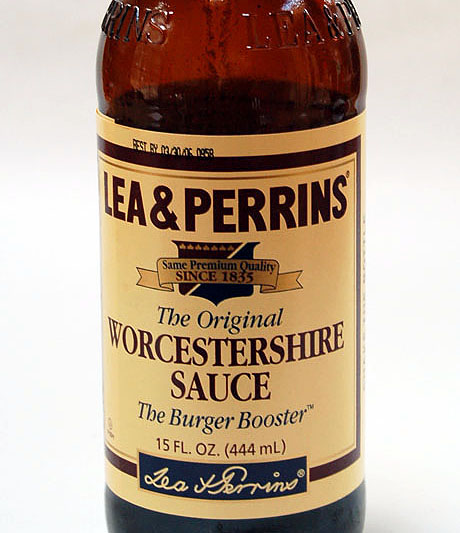 Worcestershire sauce originated, as you might expect, in Worcester, England, in the early 1800s. A certain Lord Sandys, returning home from travels in India, brought back a recipe for a condiment he'd tasted, and he asked local pharmacists Joe Lea and William Perrins to duplicate the sauce for him. They did, and they put aside a few gallons for themselves. When they tasted it, Messrs. Lea and Perrin proclaimed it vile, and relegated it to the cellar. Several years later, however, they uncovered the jars and decided to taste once more. The sauce had mellowed into something quite delicious, and an enterprise was born.

When Fernand Petiot, barman at Harry's New York Bar, tossed some Worcestershire sauce in with vodka and tomato juice in 1921 to create a Bloody Mary, this pungent earned a place in homes and restaurants everywhere. It's a key ingredient in chicken caesar salad, as well as Mediterranean chicken soup, crawfish jambalaya, black bean and lentil salad, sweet and sour pork, steak with mushroom sauce, and zillions of variations of barbecue sauce. No pantry should be without it.

Cousin Martin gave me a locally published cookbook, Costa Rican Typical Foods, by Carmen de Musmanni and Lupita de Weiler, to introduce me to the foods of the country where he spends a good deal of time. This recipe, adapted from the book, originally calls for 4 strips of cooked and crumbled bacon; add it if you wish, though I love this vegetarian version. It tastes much more delicious than it appears in the photo! Serves 8-10 as an appetizer.

In a blender or food processor, or with a wooden potato masher, blend the beans until creamy but with some texture remaining, and place mashed beans in a large mixing bowl.

in a small frying pan, heat the oil, and saute the onion for 2 minutes; then add the garlic, and cook for 30 seconds. Add to the black beans, along with cilantro, hot sauce, sugar, Worcestershire and salt. Mix well, and taste for seasoning. Adjust as needed with salt and lime juice. Serve with tortilla chips.

I couldn't run my kitchen without Worcestershire! Love this dip.

I love worcestershire sauce, it's perfect for giving things a little boost. The dip looks great, by the way!

The moment Worcestershire runs out in the pantry, I rush to to the market to replace it. It's not used daily but valuable splashs here & there do really help.

I wouldn't worry about looks when it comes to black beans. They may not always look glamorous but they almost always taste great!!

I love Worcestershire sauce, and this dip sounds great!

This is vague, but I have read exotic recipes (forgot which Asian or Middle Eastern origin) that use W.Sauce when the originals call for tamarind paste or other tamarind condiments. Evidently tamarind is a key flavor element here. Sorry to be so forgetful and too lazy to google.

Looks perfect! I just defrosted some beans today and need to do something with them!

I love it. Especially with mushrooms and onions. Yum.

MyKitchen, Tim, Kalyn: I was honestly surprised at how good this dip tastes. And at how many recipes in the Costa Rican cookbook contain Worcestershire.

Peter, same here. I don't use it all the time, but I always have to have it. Sometimes a splash in beef stew rounds out the flavor of the stew just perfectly.

Lucia, I never even thought about how dark and dull black beans can look until I started this blog and had to figure out how to photograph them. Clearly, I'm not quite there yet!

Mae, you are right -- tamarind is an ingredient in Worcestershire, and the taste is so dominant that often you can substitute one for the other.

Julia, now that I've been making black beans in my slow cooker, I have cooked beans in the freezer, too. So convenient.

This looks really good. I haven't had mexican food in ages but for some reason I've been really craving it lately!

Ooh I definitely believe it tastes delicious...and I even think it looks amazing in the photo! I love black bean everything and will have to try it with worcestershire sauce now!

This is something I've always wanted to try ... and I keep seeing it at my local supermarket. I wish they sell this L & P brand here ;p

Since W. sauce has anchovies, I don't use it. I got a veg version that doesn't taste right, but I bet tamarind will repair it. Then I can make this dip with the black beans in my freezer. There is a good veg copy, name something like Wizard Sauce.

It is amazing how much I use this stuff. And I am so glad that you used it in the black bean dip...I never would have thought to use it in there. Clever!

Maris, I made a whole dinner tonight with green chiles in every course, so I know what you mean about craving Mexican food!

Sues, the combination of Worcestershire and black beans was new to me, and I was pleasantly surprised at the result. I hope you like it.

Noobcook, I think they do sell it in UK.

Susan, tamarind might definitely help the flavor. I've never tried the vegetarian version, but this dish would be just as good, I think, with a bit of soy sauce and tamarind substituted for the Worcestershire. Play around, and let me know what works.

Dawn, the Costa Rican cookbook was filled with recipes that call for Worcestershire. I was surprised, and skeptical, but this bean dip is delicious.

Just a note. Lea & Perrins (Same premium quality since 1835) is no longer made with sugar as its sweetener. The bottles at our local markets (Northern Virginia) now list HFCS as the sweetener. A local brand, Harris Teeter, sold at their stores, is still made with sugar. As I avoid buying products with artificial ingredients, Lea & Perrins is off my list.

I take exception that this condiment is key ingredient for jambalaya. I am from Louisiana, where I grew up learning to cook the great foods of that culture. I have been in front of the stoves of many a kitchen with even more great home and professional cooks making countless batches of jambalaya. Not once do I remember any of them adding worcestershire. I have several cookbooks local to the area, and none of them call for it in their recipes. Perhaps your favorite jambalaya recipe is unique in requiring this added ingredient, and no doubt it is good, but I would call that an exception instead of a key ingredient to this popular dish.

Here's a link to make your own sauce:
http://www.recipesource.com/side-dishes/sauces/05/rec0530.html

Tkinva, HFCS??? That's awful. The bottle on my pantry shelf lists sugar, but it might have to be the last Lea & Perrins I buy. Thanks for letting us know.

Susan, my own favorite jambalaya recipe, which I've posted here several times, definitely does not call for Worcestershire, but the one I've linked to does.

Chascates, that's great! Have you tried it?

Just got a wonderful gift, Mark Bitten's Veg Book, which has veg Worcestershire and Fish Sauce recipes. Good project for whenever time and inspiration strike.

Kevin, the dip really was delicious. Interesting combination of flavors and textures.

Susan, fascinating -- I'm now going on a campaign to replace my Lea & Perrins with something that tastes just as good without the HFCS. And this is a book that's not yet in my collection.

Costa Ricans do NOT use worcestershire....they use something called Salsa Lizano which is very different. It can be bought on line, and is used in most Costa Rican dishes.