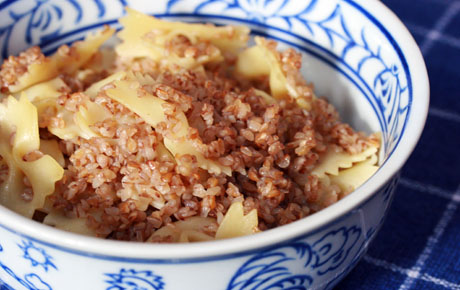 Two things readers ask most often about The Perfect Pantry:

Is there a list of everything in your pantry? And, why haven't you written about... (black-eyed peas, fennel pollen, porcupine noses...)?

Yes, there is a list. I don't publish it, but I've written about each ingredient in my pantry, at least once.

To be included in The Perfect Pantry, an ingredient must be something I use to make other things, which rules out Fresca, which I always have in my refrigerator, and also porcupine noses, which I can't imagine anyone would like, as well as many more palatable things that simply don't appeal to me, like black-eyed peas and fennel pollen.

Also, the ingredient must be something I use in more than one way, or that I use in one way, but over and over again.

Buckwheat groats fall into that second category. My pantry, and my childhood, would be incomplete without it.

For families of eastern European and Russian heritage, buckwheat groats (pretty much synonymous with the word kasha, which really is a more global Slavic term for any type of porridge) are a staple.

Buckwheat groats are whole, raw, or white buckwheat kernels, stripped of the inedible outer coating. While many people think that buckwheat is a cereal grain, it's actually a fruit seed related to rhubarb and sorrel.

Unprocessed groats are bitter, and should be toasted in oil for a few minutes before cooking. Kasha is buckwheat groats that already have been crushed into smaller pieces and toasted to bring out the nutty flavor. 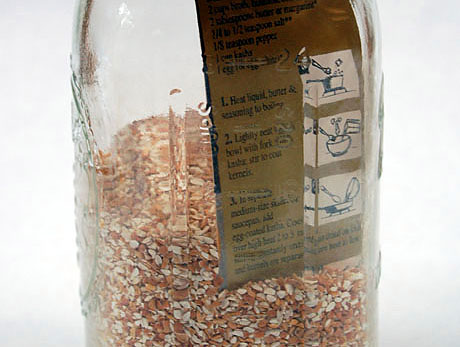 My grandmother made kasha as a side dish to heavier meat dishes in her repertoire, but for her grandchildren she tossed it with Goodman's egg bow-tie noodles to make kasha varnishkes. In my own research into the origins of the dish known as kasha varnishkes, I came across this from Soul and Gone:

In Yiddish, which adopted the word from the Slavic languages, and in English, which adopted the word from Yiddish, kasha refers pretty much exclusively to buckwheat groats. The etymology of varnishkes is murkier. It means 'bow-tie noodles,' but it appears (to my knowledge) only in the context of this dish. It’s a Yiddish word, at least in structure and phonology, but the Yiddish word for noodles is the unrelated lokshn.... The Italians, who probably invented bow-tie noodles, call them farfalle (butterflies).... I couldn’t even find a consensus on how to spell varnishkes in Yiddish. I was beginning to think... that like General Tso, tikka masala, and the global success of Domino’s, varnishkes would have to be consigned to the great realm of culinary mystery. But then I asked my mother, who knows everything. [More here.]

Wish I'd thought of that.

Stored in a jar with a tight-fitting lid and kept dry, kasha will keep in the pantry for up to two years. Try it in recipes that call for quinoa or couscous.

Without both, it's just not the dish my grandma used to make.

One of my favorite dishes from childhood, as a side or vegetarian main dish. If you're not vegetarian, substitute chicken stock for the water for a slightly different flavor. Serves 6-8 as a side, or 4 as an entree.

In a small frying pan, sauté the onion in canola oil until the onion is quite soft and brown.  Set aside.

In a bowl, mix the kasha and beaten egg with a fork until all of the kernels are coated with the egg.  In a small pot or in the microwave, bring the water, butter, salt and pepper to a boil. Set aside.

In another small pot over medium heat, cook the kasha (do not add oil or butter), stirring constantly with a fork to heat and separate all the kernels, for 1-2 minutes until all the kernels separate (the cooked egg on the outside of the kernels helps keep them apart). Remove from heat, and pour in the liquid and onions. Stir, then cover immediately and cook over lowest heat for 10 minutes, or until all liquid is absorbed. Transfer to a large bowl and mix with the noodles. Serve hot.

More recipes in The Perfect Pantry:
Fregula sarda with leeks and sausage
Quinoa salad with tomato, feta and parsley
Couscous with orange and dried fruit

Funny post! This would probably be a great side dish to my brisket for Hannukah!

And they taste great with a little bit of maple syrup!

This is undoubtedly one of my most favorite comfort foods of all time. I woke up this morning thinking about making it and there it was, in your blogpost! Thanks for the simple recipe.

My mom used to make kasha and bowties all the time--I think I haven't seen bowtie pasta since then! Thanks for the memories :) .

And thanks,too, for the link to the kasha burgers. They've become a favorite, too!

My mom used to make these! When I was a kid, I was convinced that I wouldn't like kasha varnishkes, but I did, despite my protests!

Easily one of my husband's favorite foods - so warming and perfect for winter days. Thanks for reminding me!

Kasha varnishkes, oh my, yes, I made them for the first time 30 years ago and we loved them! When the boys were little it was such a winner getting them to eat veggies too.

I keep jars of grains in my pantry. I think they look so pretty lined up.

I like buckwheat groats too - so much flavour. I think they would be more popular if they weren't called groats!
I like to make mushroom burgers out of them. They are messy and fall apart easily but they are really good. Not date food!
Now about those porcupine noses....

I love the nutty flavor of kasha. You know there is a "Fresca Cake" recipe out there. But, I know how you feel about baking. I'll bet I could come up with at least two or three uses for Fresca, just so you could write about it ...

I know I should at least drop a comment abt the recipe but I have not fully read it yet. My curiousity is killing me... what in the world is a porcupine nose?? I'm sure it is not the real thing... I hope not... |-)

Julia, Kasha and brisket? It's a natural!

Ellen, I always have kasha in the pantry, but sometimes the jar gets shoved to the rear of the shelf and I forget about it for months. One of the world's great comfort foods for me, too.

Ricki, kasha varnishkes were such a favorite in my childhood. And kasha burgers are a grown-up pleasure.

Maris, sometimes I think it's all in the name. Maybe if it was just called bow ties, or something like that, it would sound more appealing!

Marilyn, your husband has good taste!

MyKitchen, you remind me that I should make this for the grandkids over the holidays. I think they'd love it, too.

Pam, I keep my grains in jars (and yes, they do look pretty) to keep the country critters out, and to keep the grains fresh. Some things do better in the freezer (grains with natural oils), but the kasha keeps just fine in the jar.

Natashya, you're absolutely right. Groats sounds horrible -- like goats! It's all in the name.

TW, is this a challenge? If you come up with recipes, I'll definitely write about it. Fresca is always, always, always in my pantry.

MagiKpiper, do porcupines even have noses??!

HOW DO YOU MAKE STUFFED CABBAGE WITH BUCKWHEAT?

I've had buckwheat groats once, made by one of my college roommates! I remember the texture as being chewy, satisfying and comforting! I've never had them since and maybe I should, since the memory is still so fresh in my mind.

As you mentioned it's gluten free and I think she was on a strict gluten free diet. What great college memories these gloats bring.

I love butter and noodles, why not throw in some buckwheat!

Fascinating. I have eaten buckwheat pancakes and loved them, but I've not done much (ok, any) cooking with buckwheat in general. In fact, until this post, I didn't know buckwheat groats existed. This is why I love the Perfect Pantry and the culinary world in general---there is always something new to learn (whether it's an ingredient, recipe or technique), and I'm as much an avid learner as I am a cook :-)

I'm with you on BE peas, although I love all other beans. (I threw in a leftover 1/2 can into soup last night that my mom left from New Year's day). One of my favorite pantry items in Lemongrass. I get it fresh from the Farmer's Market so the yeild is about double. I love it in curry, in a marinade, soup... LOVE it!

I just finished eating a bowl of kasha, my mother taught me this dish when I was young. We cooked it with the egg, separating the groats as they cooked and then adding either beef or chicken broth (It is best if the broth comes from a recent roast). In another pan I sauteed diced onions and lots of sliced mushrooms. When the kasha had absorbed all of the broth, I add the onions and mushrooms and viola! Healthy comfort food! I like a dash of sea salt and some freshly ground pepper on top. I read that this dish helps people with diabetic issues control their blood sugar too.