Guest post and photo above by Peter in Brazil, chef and co-owner of Pousada do Capão

Dill is one of the few herbs that I've had success with here in São Gonçalo, ever since I put up a bamboo fence to keep out the rabbits. The very picky bunnies would single out the tender seedlings and nibble them right down to the ground. (I'll bet dill-fed rabbit would be delicious.)

Many of the other culinary herbs I've tried to grow here just don’t seem to have much flavor. It must be something about the climate, the sandy soil, the extremes of wet and dry, the seasons that I don’t yet understand.

The tarragon I planted is thriving -- in fact it’s invasive -- but it's tasteless. Time to pull it out. My garlic chives, oregano and marjoram have fared reasonably well until now, but six months of daytime heat without a drop of rain have begun to take their toll.

And then there's the dill that keeps coming and reseeding itself and coming again.

The flavor is great, it doesn't require much watering, and if the heat means that the feathery fronds are few and dwarfed, and the plants bolt rapidly, that’s cool, because I love dill seed, which isn’t easy to come by here in the Brazilian Highlands. Since each flower head can yield more than a thousand seeds, there's plenty for eating and replanting.

A member of the Umbelliferae family, dill is a cousin to carrot, parsley, cilantro, fennel and caraway. It has been used for millennia –- by Neolithic man in Switzerland, by Babylonians, ancient Greeks and Romans, Norsemen (who gave dill its name) and more. It's rich in calcium, iron, magnesium and fiber.

I prefer the depth of flavor of the seed, which is actually a fruit, to that of the dill weed, but I often use them together. 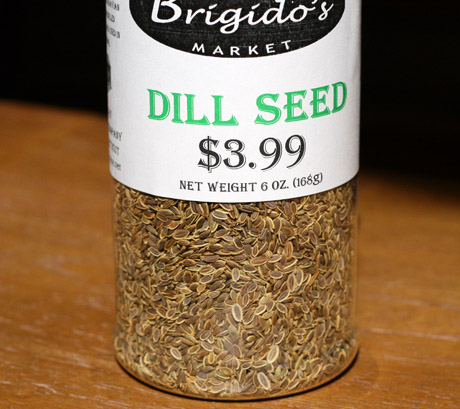 For as long as I've been making stuffed cabbage, I’ve never written down this recipe before. Use your intuition, ad lib, and create. The filling should be flavorful and even a little salty, since the cabbage will absorb. This recipe makes approximately 50 rolls, and freezes well. It is great hot, at room temperature, or even cool for a summer meal.

2 large cabbages –- green or red, or one of each

Prepare the filling: In a large frying pan over medium heat, sauté the onions, garlic, and celery (if using) in the butter until the onions are soft and beginning to brown. Add the meat to the onion mixture and fry until cooked through, breaking it up as you go. Season with dill seed, salt, and pepper. Add the rice or bulgur, mix well, and continue to cook, letting the flavors meld, and moistening with a few tablespoons of stock as needed -- you want to end up with a filling that is moist, but will hold together when rolled in the leaves. Re-season and set aside to cool.

Prepare the cabbage: Core the hard stem from the bases of the cabbages and cook in boiling, salted water until the leaves separate easily. From time to time you may need to cut more of the core to free the leaves at the stem base. They should be easy to pull from the cabbage head and flexible enough to fill and roll. As they cook, remove the leaves from the water with tongs and drain. Some of the leaves may be big enough to make two rolls. Cut in half along both sides of the rib and discard the rib. Others may be too small. Reserve those to line the cooking pot and to place between layers while cooking. I usually cut the hard stem base and bottom of the rib from each leaf for ease of rolling.

Form the rolls: Lay a cabbage leaf out in front of you and place two Tbsp of filling an inch from the edge facing you. Roll the edge facing you over the filling to enclose it. Fold the outside edges in over the ends of the roll and then continue rolling away from you to complete the roll. (The same way you'd make an eggroll.) I try to keep my rolls good and tight.

Line a good heavy stock pot with a few of the discarded leaves, and as you form the rolls, place them neatly and tightly in the pot, with the leaf seams down. Once you have completed a layer, cover with a few more discarded leaves and continue with another layer of rolls. And so on until you have used up either the filling or the leaves. Cover the last layer with more cabbage leaves.

Cook the rolls: Pour wine, 2 cups of stock or bouillon, and tomatoes over rolls, and then add water to bring liquid to the level of the rolls. Season with salt and pepper. Bring to a simmer and cover. Simmer gently for an hour, shaking the pot from time to time to swirl and mix the cooking liquids. There should be little liquid left as the rolls will absorb a lot. Remove from heat and let cool. (At this point, you can freeze the rolls.)

Make the dill cream: In a small bowl, mix cream and vinegar, add chopped dill and season with salt and pepper.

To serve: Heat the rolls in a buttered oven-proof baking dish or casserole with a bit of the cooking liquid, 3 to 4 rolls per person, in a 350°F oven until heated through and just beginning to brown. Serve with dill cream.

Stunning photo. Dill will be handy come Halloween. I wonder how the Neoliths used it.
The recipe sounds great.

I bought a big bunch of fresh dill this week, so we have been having it in everything: fish, salad, ... it's really appropriate in your stuffed cabbage & cucumber soup, since it was the main herb used in eastern European cooking. I've always wondered why they couldn't grow parsley, but your experience suggests that herbs are really finicky.

Such an artful photo!!!

I love dill. I over use it. I put it in and on everything! I love how you used both the dill seed and the weed for this dish! I have given you an award, I hope you'll come visit my blog to claim it!

Marcia - I'm glad you like the photo! Thanks. Protected by dill and a bit of garlic you won't have to suffer any tricks. I bet those Neoliths made stone soup.

Mae - You're right about those Eastern Europeans...I even found a Hungarian recipe for a sweet dessert pie made with farmer's cheese and dill. It's on my list of future experiments.

Laura - Thanks. It just fell into place - the light, my grandmother's luster pitcher and the dill in various stages.

Paz - I'm glad you liked the post - and as always thanks to Lydia for her expert eye and editing prowess.

Reeni - Try using both together - they really are surprisingly different and complementary. I'm sure your award is meant for Lydia - but I'll head over there to check out your blog anyway.

I've tried growing dill once but they died on me :( but seeing the lovely photos here, I'm inspired to try again ^^

I'm jealous of your herbs harvest!

I love stuffed cabbage! I once had a cab driver from Armenia who told me how his family made it!

Peter, I had no idea dill had so many uses---zap hiccups AND keep witches at bay? YES! lol... I knew I loved this herb.

I use dill often. I love it in potato & vegetable salads. And while I have a treasured recipe for stuffed cabbage (handed down from my mother & grandmother), your version sounds wonderful & rustic. Love that it features a dill cream sauce, as the recipe I use does not. Definitely giving this one a try.

I don't think I've ever had dill seeds before. I need to find them and try them. Nice blog, pics and posts. :)

Oh my God - we just had an incredible hail storm here in the tropics!!! Mother Nature is not happy. Glad I harvested the dill seed...

noobcook - Try again. Once you get it going it takes care of itself. I have heard that it is very difficult to transplant though. Good luck.

tigerfish - Don't be jealous. Think of all the pantry ingredients that you have in your part of the world that I am jealous of!

marcia - is ROFL a derivative of LOL?

Kalyn and Sandie - send the recipes, PLEASE. I love both authentic ethnic ones and all those distaff-side hand-me-downs. Would you believe that my Nana's lemon sponge and cocoa bread puddings are huge hits here at the inn? And Sandy dill sure beats Bean-o.

ben - You're gonna love them...and they really aren't hard to find. Thanks

Dill is one of those underrated things I don't use very often. This sounds really good!

Kristen - Thanks. I hope you'll start using it more and try out this stuffed cabbage. Dill is so cooling.

This reminds me of my mil's stuffed cabbage, which is so wonderfully hearty and filling. I've got a serious hankering for some now, Lydia!