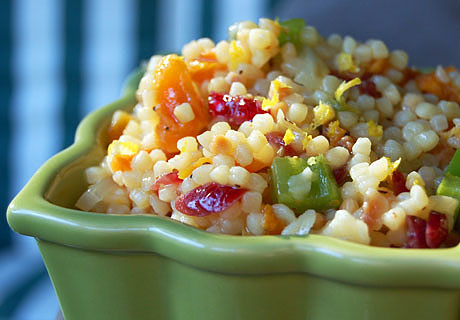 When I first moved to Rhode Island, potluck ruled. It seemed like every weekend was another potluck occasion, and the pressure to come up with new dishes was intense (and entirely self-inflicted).

In our first full summer here, Ted and I offered to host a party for our local arts organization. We figured it would be a good way to meet people, so we sent out invitations and I started cooking for a huge buffet dinner that we planned to serve outside under the pear trees. The invitation asked everyone to bring a beverage to share -- and their favorite bug spray. No potluck. Well, this caused a stir in our little community! No potluck? Indeed!

A few years later I learned how to turn grandanina couscous into a perfect potluck dish, and now, though potluck dinners are infrequent, this couscous has found a permanent home in my pantry.

Grandanina is a medium-size coarse ground couscous with a nutty flavor, made of durum wheat. Couscous often is called pasta, as it's made from the same ingredients, and in many dishes like this one you can substitute orzo, a small torpedo-shaped pasta, or Israeli couscous, which is a slightly larger grain, the size of tapioca pearls. I buy grandanina couscous at The Gourmet Outlet in New Bedford (Massachusetts), the retail arm of Sid Wainer & Son, wholesale purveyor of fine foods to restaurants, airlines, hotels and corporations all over the US; recently they've opened an online store.

Couscous originated in North Africa, and is prevalent throughout the cooking of Mediterranean cultures, often as a base for stews. So it's particularly appropriate that this recipe uses both apricots and orange, which also are cultivated throughout the hot climates of North Africa.

I've brought this dish to many a potluck, but I also use grandanina as a thickener in soups, a base for stews, and in hearty salads.

Couscous with orange and dried fruit

This colorful and healthy recipe from chef John Verrier at Sid Wainer & Son serves 6 as an accompaniment to grilled chicken, fish or pork. One year for Thanksgiving, I bought a boneless turkey breast and stuffed it with this couscous, then glazed the outside of the turkey with pomegranate molasses. It looked like a giant football, but it tasted amazing. Recipe can be halved.

In a medium stock pot, cook couscous in water according to package directions. Drain and set aside.

While the couscous is cooking, heat the olive oil in a small frying pan. Saute the garlic, red onion and green pepper until the onions are soft, about 7 minutes. Season with salt and pepper. Put in a serving bowl. Add dried fruit. Add the cooked, drained couscous. Pour in the orange juice, and keep stirring until thoroughly mixed and the liquid is completely absorbed. Season with salt and pepper. Stir in lemon zest. Serve warm or room temperature.

Also in The Perfect Pantry:
Sweet couscous
Couscous for a crowd
Fregula sarda with leeks and sausage
Hot roasted veggies with couscous
Quinoa pudding
Tagine of chicken with prunes and almonds

That sounds delicious! And not too hard to cook -- and no special equipment needed. Sometimes couscous recipes get a little aggressive with the purpose-driven pots.

That looks so good!!! I love pilaf with dried fruit.

One more couscous for me to try, yay! :)

I found Israeli couscous at Ocean State Job Lot and stocked up. I loved your recipe and have used the couscous in other potluck dishes. Let's face it, it's another pasta, can you go wrong??

Mae, this is definitely not a fussy dish!

Cafe Johnsonia, the dried fruit actually gives this some sweetness -- a nice counterpoint to the citrus flavor.

Patricia, yes yes yes! It's easy and goes with so many grilled foods.

Pauline, so glad you are finding fun ways to use the larger couscous. You can never have too many pastas in your pantry....

This dish is perfect for summer! Lovely!

I've not mananged to find the larger couscous ...yet, but I'm saving this recipe, because it looks great and we like fruit and savoury mixed together, mmm!

Love the story behind this recipe, and the accompanying photos are lovely! Since I have all the ingredients but couscous, and a ton of orzo in my pantry, I think I'll give this recipe a whirl making the substitution as you suggested. Thanks for the idea.

That is the most gorgeous photo! I may steal your idea and update some of my earlier posts this summer when I'm in the States. I feel like my first posts were kind of wasted because nobody was reading them, LOL!

Today's NYT had an article about recipe "deal breakers" with the perfect sentence to illustrate my previous comment: "Unusual equipment is a common deal breaker, too. How many times has a couscous recipe been cast aside because there is no couscousière in the house?"

Leslie, Gattina, Kelly-Jane, Paz: Thank you! This is such a wonderful dish and one of my favorites for summer; I hope you will all try it.

Sandie, the orzo should work very well as a substitute. The flavor of the pasta as it absorbs the orange juice is amazing.

Betty, not only did many current readers miss the earliest posts, but there are always things I'd like to update, links to new recipes -- and (hopefully) improved photos.

Mae, I saw that article too. I'm a big fan of Laurie Colwin, who wrote a wonderful essay about the essential batterie de cuisine: 2 knives, 2 pots, 2 pans, etc. I do believe in keeping it simple, even though I have more than a few gadgets in my kitchen (including a couscousiere that I never use).

You know what ? I've never tried preparing a dish with couscous before!:O

That couscous looks SO good Lydia! I love when you have pictures, yay. Have a good weekend!