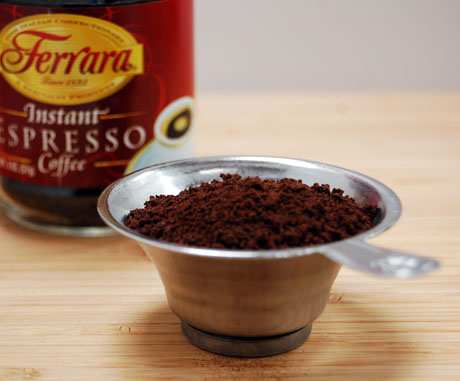 The nice folks at Martha Stewart Living Radio have invited me to be on the "Living Today" show, so when I saw Martha Stewart's Quick Cook at a barn sale to benefit our local library last weekend, I had to buy it.

Call it research, though the truth is that I am genetically incapable of passing up a cookbook at a barn sale. (Yes, if you must know, I bought more than one cookbook. Maybe three. Or four. And a book on origami. And an adventure board game for ages 8 and up. And some ninja turtle action figures.)

Her sorbet recipe, a true pantry special (I'm sure Martha has the most perfect pantry), takes just five minutes of work and calls for instant espresso, which I always have in the cupboard. I don't use it to make drinks; I use it for making desserts, because coffee coaxes the best flavor from chocolate in dishes like truffles, triple-chocolate cookies, chocolate-espresso cake, cupcakes and little mousse cups.

As I wrote in an earlier post, instant coffee is a relatively new invention, created in 1901 by a Chicago chemist. His invention languished for more than three decades until Nescafé, a collaboration between the Brazilian government and Swiss conglomerate Nestlé, was formed in 1938 to market a dehydrated coffee that would have a longer shelf life and could be reconstituted with water. However, with the outbreak of World War II, Nescafé didn't find a market in Europe, so it was exported to the US, where the government put it in soldiers' meal rations. That's how America became hooked on pretty bad instant coffee, which later became the norm in 1950s households like the one in which I grew up.

These days, you can find good quality instant espresso, in granulations from powdery fine to coarse, in almost every supermarket. With a forever shelf life, it keeps well in the cupboard or in the freezer.

You can substitute dark coffee for instant espresso in most recipes. Use the darkest coffee you have on hand; double the amount of coffee, but don't double the water.

Fast food, made from a well-chosen pantry and seasonal produce -- Martha was 25 years ahead of the rest of us.

Adapted from Martha Stewart's Quick Cook, this simple recipe needs a few hours' head start, and an ice cream machine (I have the kind with a canister that you freeze ahead of time). If you're feeling incredibly indulgent, serve a scoop of this sorbet on top of a chocolate brownie, or make it elegant in a puff pastry cup. Makes 1 quart.

Make espresso coffee with the ground beans or instant espresso and 2 cups water. Add the vanilla bean, and chill in the refrigerator.

Combine 3/4 cup water with the sugar in a straight-sided saucepan. Bring to a boil, remove from the heat, swirl to make sure the sugar is dissolved, and combine with the coffee. Chill the mixture in the refrigerator for a couple of hours.

Discard the vanilla bean, and freeze the espresso mixture in an ice cream machine, according to manufacturer's directions.

I bet this would make an interesting "cold" affogato with a little vanilla ice cream.

Oh how exciting...being on sirius radio! I wish I didn't have to work, or else I would be listening to the show. Also, the recipe looks super yummy, from a complete coffee addict!

I can't figure out why somebody who loves coffee and has an ice cream maker has not put them together? Tonight there will be a new meeting! That's funny I only use it to cook with not to drink.
Cool on the radio show!! Hip, hip!!

I can rarely pass up a cookbook either, even at Costco where I buy far too many of them! Way to go, that is so fun that you'll be on the radio. I wish I didn't have to teach school or I would be listening for sure!

Lydia how grand about the radio show. I am not sure how wide awake I will be but I am going to subscribe to it.

As for the coffee sorbet - I've been looking at a few recipes too. So this is a sign to go ahead and make it!

For those of us without an ice cream maker, you might consider making "Coffee Jello". My recipe is so old I don't know where it came from but "coffee jello" was a "grown-up" treat on special occasions.

I have that cookbook, and I think I bought it new before I had any idea Martha Stewart would be anybody! I must admit I haven't really used it that much -- the recipes are SO quick that I figure I can do as well with my own brain.

Isn't that cover photo a kick, though?

Congratulations on the radio show gig!

That's fabulous news, Lydia. Ask Sirius for permission to upload the segment as a podcast on your blog.

Now, may I have 2 scoops or sorbet, s'il vous plait?

Marc, welcome to The Perfect Pantry. That sounds delicious!

Jason, I'm a bit of a coffee addict too. And a cookbook addict!

MyKitchen, there was a time when I lived in New Jersey, when I was completely addicted to a particular coffee chip ice cream made by a local ice cream parlour in our town. Then I moved to Boston and became addicted to coffee fudge ice cream, made by Brighams. Why, oh why, don't I make it more often at home?

Kalyn, if you and I shopped at the same Costco, we would always meet in that cookbook aisle. I don't think I've ever gone there without coming home with at least one cookbook.

Meeta, you will do such wonderful things with this sorbet -- I will watch for a photo on your blog.

Pauline, thanks so much for sharing this recipe! I'm not much of a jello fan, but coffee jello is just too tempting to resist! I'm sure it will be a thousand percent better than the blue jello we just made for our grandson's birthday.

Betty, I wonder what Martha thinks of that cover photo? It made me giggle.

Peter, that's a great idea -- I hadn't even thought of it. You may have a whole batch of sorbet for that one! Thanks!

Yay! My friend will be at the show!! :)
I like adding instant coffee to my morning milk, Lydia. I always have it at home.

How exciting! A pioneer blogger, and now on satellite radio! I'm keeping my fingers cross I'll be able to tune in. And I agree completely with instant espresso, and its use in desserts. I've got a great recipe for coffee ricotta mousse.

So glad to see you finally made the Martha Stewart Living (satellite) Radio announcement on your blog, as I've been waiting patiently for the call-in number.

I'm jotting down a note to myself and penciling in your segment on the show. I'll do my best to listen from the car. Best of luck with it and have a fun experience, which I already know you will.

Oh, and I use a touch of instant coffee in my Make It Better Brownies. Delish!

I couldn't agree more, a little bit of coffee does wonders for chocolatey desserts.

i never knew instant coffee came around 1901 ! wow ! But god bless that chemist for it.... trust me sometimes the instant stuff really comes handy ! Nice Post !

I have a mate who works in wine so you would expect him to have a good palate. He was over and I made him a cup of coffee from his favourite instant brand without telling him. When he tasted some, I asked what he thought of it and he gave it a score of 5/10, he was somewhat bemused when the identity of the brew was revealed and to this day he refers to this brand as 5/10 coffee. Is it embarrassing to admit I like instant coffee?

Tigerfish, yes, you can mix instant espresso with hot water to make a drink, as strong as you like it.

Patricia, I like adding milk to my coffee! Does that make us opposites??!

Amy, thanks -- I love coffee and chocolate together, too.

Kate, you never know when you'll be completely out of coffee and find the instant coffee or espresso in your pantry -- it's a life saver!

Neil, that sounds like some television commercials here... "we're secretly replacing the regular coffee with Sanka" or something like that. It's not embarrassing at all -- when I was growing up, instant coffee was all we drank at home.

Lydia, that sounds like an adult treat indeed! I can already think of a dozen ways to serve it!

btw, I'm hosting a Monthly Mingle event on my blog this month, and it would be great if you could participate! This coffee sorbet could be a fitting addition! please check the details on my blog:)

Wow! That is really cool! I wish I would have heard it!

Mansi, I guess this really is an adult treat -- but when I was a kid, I loved coffee, so I'd probably try to sneak some! I'll check out this month's Monthly Mingle, too.

Bridget, if I can get the radio segment as a podcast, I'll let everyone know.