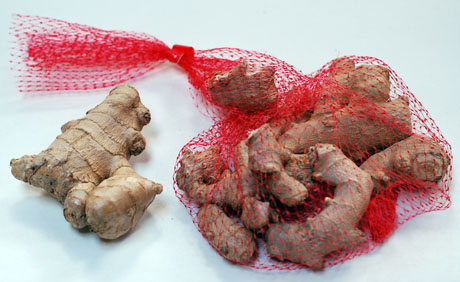 Ginger -- the color you paint on your walls -- is hot.

Cultivated in southern India, Jamaica, Fiji, Indonesia and China, and more recently in Australia, ginger (often called ginger root, though it's not a root) reportedly was a staple in the diet of Confucius, who, wise man that he was reputed to be, surely recognized ginger's properties as a healing food. Ginger tea helps alleviate symptoms of nausea, inflammation and gastrointestinal distress. Ginger also may provide a boost to the immune system.

On the culinary front, fresh ginger stars in the whole range of Asian cuisines, as well as the cooking of many Caribbean countries. (Dried powdered ginger, popular around the world in baked goods, is rarely used in these cuisines except for Indian masalas.) Look for rhizomes that are firm, plump, and heavy; inside, the flesh should be yellow, and not stringy. When the rhizome is young, you don't need to peel it. When you do peel, use a sharp paring knife or the edge of a spoon.

Called a hand, a large rhizome is broken down into fingers, though I've never written a recipe that calls for a finger! Usually recipes list the amount of ginger required in a variety of ways -- a two-inch piece, or a disk the size of a nickel. After all, how can you measure something that is gnarly and knobby and inconsistent?

Ginger keeps well in the crisper drawer of the refrigerator for a week or more. If I think I'll have leftover ginger, I prefer to make and freeze ginger juice, rather than freezing the rhizomes.

Try fresh ginger with kale, bananas, beef, sea bass, chicken, carrots, shrimp, nectarines, sweet potatoes, sorbet and chocolate. Wash it all down with lemonade. Just as the color enhances any decor, ginger livens up most any food.

My dear friend Laura goes to yard sales every Saturday. Every so often, when I am very lucky, she appears at my door with cookbooks found on her rounds. Last week, much to my delight, she snagged a copy of The Elephant Walk Cookbook, by Longteine de Monteiro, who owned a restaurant of the same name in Boston, and Katherine Neustadt. The Elephant Walk was the first American fine-dining restaurant to highlight the cuisine of Cambodia, and it was an instant favorite from the day it opened. This recipe serves 4.

I think ginger is hot too ;-) love ginger in sweet and savoury dishes. My mom used to make me ginger tea when I am having gastro problems and it helps to ease my poor tummy. Last week, I bought Stones ginger wine but I haven't tried it yet. It's from the same company that makes fantastic ginger beer in Australia.

i love ginger, we use it in everything :) i'm posting a ginger tea soon :) yum! and of course ginger beer is a HUGE thing here in Trinidad in December :)

Demeter Perfume also makes a scent called "Ginger Ale" which I just adore wearing. It's fresh and light and I can even smell the bubbles! We recently found Ginger Fudge and it's so delicious!

I have had fresh ginger ale - made with sparkling water, lemon, ginger, etc. and it was wonderful.
There is a lot of ginger in your dish! It sounds interesting.... I love ginger and use it a lot! Maybe I'm too conservative.... hmmmm Must ponder that!

Lydia, that sounds like a wonderful book! Delightful to have a friend like that.
Ginger is one I've been slow to warm up to when I cook though I enjoy it when we eat out. Don't know why that is.

I love ginger and all the things you can do with it. I never heard of Ginger Catfish. I love it!

i am pretty much obsessed with ginger. there's a local bar that makes their own ginger beer and that is what i choose to get all the time now, forgoing any of their masterfully made cocktails. and don't get me started on candied ginger - i could easily finish a box on my own!

i love anything with ginger. My mother actually got me interested in eating it~I did a blog/post a while ago from New Zealand where I stuffed a date with cream cheese & candied ginger! it was so refreshing. I would imagine this is an excellent fish dish~thanks for sharing this delicious recipe with us1

Mmm...ginger is a staple in my kitchen too, I use a lot of it to make ginger tea (Indian style, strong black tea with milk and sugar). I was amused to know about the "ginger hand"!

Ginger is a refreshing ingredient too and is perfect for fish.

Nora, ginger is great for curing all sorts of ailments -- tummy, muscle aches, colds. Ginger wine? That's new to me!

Trini, the first time I tasted homemade ginger beer was in Arima -- the woman who was our host there made her own, and it was potent, but delicious!

Katie, I'm a bit timid about cooking with ginger, too. A Chinese friend taught me a recipe for ginger chicken many years ago -- it called for two cups of shredded ginger! Oh, it was goooooood.

Tanna, I'm lucky to have my friend Laura in my life for so many reasons (including her penchant for finding great cookbooks at yard sales). Let's all start cooking with ginger more often!

Paz, there are so many wonderful ginger recipes. What are some of your favorites?

Radish, ginger beer is pretty terrific, isn't it? And candied ginger...well, come back here later this week to read more about that.

Jann, I bookmarked that great recipe on your blog. Cambodian food is so interesting, light and fresh like Thai. I hope you try this recipe.

Nupur, ginger tea is refreshing, but I usually drink it when I'm feeling a bit under the weather, and it always restores me.

Veron, ginger and fish do go so well together!

Once you discover fresh ginger, it's hard to use the dried, ground stuff in the jar. Mine lasts about a month in the crisper; it must be bionic.

Just like garlic, I love ginger in my stir-fries, marinades, even soups.

I´ve never tried it in lemonade, may be just the thing for days like these

What a great post. The recipe sounds mouth watering!!

We love ginger and use it for quick stir fry a lot. I also make ginger tea - just a teaspoon or so of chopped ginger and hot water - to sooth the tummy. Our friend Bruce who is restauranteur extrordinaire told me that chopped ginger can be frozen and that is how we keep it in our pantry.

Cooks Magazine has a test of best ways to keep ginger this issue. Winning strategy is to throw it in the fridge without wrapping. Then cut off the dried up end when you want to use it. It doesn't last forever, but longer than if you wrap it up, freeze it, or leave it out. They didn't have your juicing technique, though. Sounds smarter.

Susan, dried and fresh ginger are two completely different tastes. I do use the dried for baking, but generally not for cooking.

Tigerfish, ginger and garlic together is an amazing flavor boost!

Lobster, ginger lemonade is refreshing and restorative. Please try it!

ATB, thank you so much.

Mary, do you peel and chop? It would be so handy to have in the freezer.

Christine, I'm for any strategy that involves minimal prep! The juicing gives you the ginger flavor, which is great for beverages and soups, but of course not the texture of the fresh ginger. Seems like there are many good ways to store the fresh rhizome.

I just LOVE ginger! one of my very favorite ways to have it is chopped raw in a chimichurri like sauce to serve with salads and grilled meat. But, you've got to be a really ginger lover to try it this way, because it is kind of strong :D
Have a great week!
M

Hmm your recipe sounds great! We usually use ginger in many chinese dishes especially when we steam fish, it's yummy!

My mum used to infuse chopped ginger with honey for me when I was little. She said it'd boost my energy level;)

Ginger catfish...how great is that!

Ginger is one of my favorite flavors, and I try to use it whenever I can--it's such a lovely, bright and fiery addition to so many foods, both savory and sweet. One of my favorite cocktails is the Moscow Mule, which is nothing without large quantities of fresh ginger--it's ginger ale/lemonade for grown-ups!

I agree measuring ginger is always really tricky. Nowadays I grate it on a microplane and measure that. I love your accompanying recipe, ginger and fish is always really great. Ginger and bananas sounds really interesting too. Maybe a roasted banana ice cream (ala The Perfect Scoop) with ginger? I've done a mango and ginger ice cream in the past, which was very tasty.

Melissa, I'm trying to become a serious ginger lover, because ginger is such a healing food. Chimichurri sauce and meat is something I discovered just a few years ago. What a fabulous combination!

Valentina, the Chinese cuisine uses ginger so well, doesn't it?

Jeff, definitely a reason to search out catfish, even here in New England!

Lisa, hooray for anything that zings up a cocktail!

Dani, thanks for visiting. Love the videos on your site.

Amy, I will bring my microplane to your house if you'll make some of those wonderful flavor ice creams for me!

Thanks for the recipe for my walls and my stomach. Incidentally I've never heard of mushroom soy sauce and must look for it. All I can say is thank god for microplanes and ginger, just make sure the right fingers get grated.

Ginger is probably one of my favorite ingredients - I love it's bite, and would find any excuse to work it into a recipe. I'm even on the lookout for recipes where it might be used in a cocktail!

Callipygia, I'm giggling! What did we ever do before Microplanes? Do look for the mushroom soy -- it's made from shiitakes, and is really delicious.

TW, you need to get together with Lisa The Homesick Texan for a Moscow Mule!

Lydia, yes to peel and chop and then spread around in a plastic bag to freeze so that it is easy to grab any amount.

Steamy, you can get your kids to eat fish and ginger? Wow!!!

Although I'm not very good with chilli heat, I love the kick of ginger.

2 cups is more than I've ever used though! I'm off to look for this cook book, it sounds really interesting...

Kelly-Jane, the first time I made a recipe with this much ginger, I had the same fear I had when I first made chicken with 40 cloves of garlic, which is now one of my favorites. It seems like a lot, but it's cooked so completely that the flavor is more mellow than you expect. I'm so glad to have a copy of this cookbook; hope you can find one.

I love ginger in drinks like tea, smoothies and soup. I love the sensation on the throat, it's so soothing. One of my favorite things is fresh ginger tea with honey, especially when I'm not feeling too good.

Christine, my favorite tea when I'm not feeling great is ginger-lemon. I don't know whether it really works, or just tastes so good that I feel better instantly!