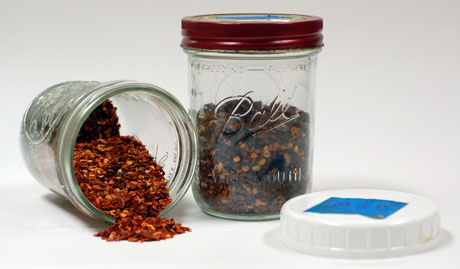 Yes, pizza pepper -- that's what we call the crushed red pepper flakes that sit on the table in every pizzeria in the northeast United States. Call us crazy, but no matter what topping we choose, we like the option of bringing in some heat. When a server asks if you'd like pepper, he or she will produce not a terrifyingly large pepper mill, but a shaker jar of red pepper flakes.

By the way, red pepper flakes are a popular table condiment in Hungary, Turkey, Korea, Japan, and the Mideast, too.

Red pepper flakes are made by roasting chile peppers, and then crushing them. The high percentage of seeds that remain account for the heat of the final product. The peppers used, mostly California, cayenne, or New Mexico chiles, range from 16,000 to 20,000 Scoville units. (Green bell peppers score 0 Scoville units; jalapeños 3,000-5,000; Scotch Bonnets 200,000-800,000.)

In my pantry, I have both mild and hot red pepper flakes, locally grown and purchased by the bag in Chimayo, New Mexico. If you can't get to the wonderful roadside chile stand in Chimayo, you can order both mild California pepper flakes and hotter Pakistani pepper flakes from Penzeys. The mild flakes are much lighter in color, which is one way to tell which peppers are which on the spice rack. For safety, I always label the jars.

When it comes to red pepper flakes, freshness matters; stale pepper that sits around in your pantry definitely loses its kick. Store pepper in an airtight jar or in the freezer. After a year, you either need to replace the spice, or increase the quantity when you cook with it to compensate for the diminishing pungency.

Red pepper flakes, nicknamed diavolochino in Italian, give their name to pasta fra diavolo, but I love to spice up everything from scrambled eggs to escarole soup. Try a few shakes of red pepper flakes in hummus, roasted cauliflower, African peanut soup, lemon and honey glazed spinach, barbecue sauce, and an unusual orange-chili pepper ricotta cheesecake.

It's hard to believe that it's been a quarter of a century since the publication of the original edition of The Silver Palate Cookbook, by Sheila Lukins and Julee Rosso. The recipes are still fresh and inventive, and the new 25th Anniversary Edition of the book is even better than the original. In the introduction to this recipe, the authors write: "This racy pasta sauce is named for Italian ladies of the night (the puttone). It's quick and cheap and we hope it offends no one to say so." Serves 4.

Bring 4 quarts salted water to a boil in a large pot. Stir in the spaghetti. Cook until tender but still firm. Drain immediately and transfer to four heated plates. While the spaghetti is cooking, drain the tomatoes, cut them crosswise into halves, and squeeze out as much liquid as possible. Combine the tomatoes and olive oil in a skillet and bring to a boil. Keep the sauce at a full boil and add the oregano, pepper flakes, olives, capers, garlic, anchovies, and 1/2 cup parsley, stirring frequently. Reduce the heat slightly and continue to cook, until the sauce has thickened to your liking, 3 to 5 minutes. Taste and add salt, if desired. Serve immediately over the hot pasta and garnish with the additional chopped parsley.

25 years since the Silver Palate came out? Good grief. I learned to cook from that book. And I love pasta puttanesca!

You know I've seen those little red pepper flakes in pizza restaurants for years, but just never tried them. Now any time I make a dish with heat, I add a little bit of the flakes. Why did it take me so long to discover their complex, yet simple, beauty?

Aha. That explains why I some times keep flaking and flaking.

Yeah to Silver Palate (the chicken Marabel is to die for!) pizza w/ crushed pepper flakes and pasta puttanesca!

I love Pasta Puttanesca! Great recipe.
In Andorra and Spain the red pepper goes into a bottle of good olive oil - making the oil hot. They just keep adding pepper periodically to keep the heat up until the bottle is full. One drizzles the 'hot' oil on the pizza.

Christine, same here -- hard to believe it's been 25 years.

Grace, hot pepper flakes are addictive! Once you get used to having a bit of a kick on your food (pizza or anything else), you've just got to have it.

Callipygia, that chicken marbella is one of my all-time favorite party dishes.

Katie, I love the idea of hot oil on pizza.

I don't know why but I've never made this dish, and you know it's not because I don't love the hot red peppers. I have the book too, so I need to get on it.

I didn't know this pepper were added to pizzas there, Lydia!

In the central Ohio area the red pepper flakes (in every pizzeria) are known as "bird seed". If there wasn't any on the table you could always ask for a side of birdseed.

Yep, I totally have to have them on pizza (which my husband introduced me too) but I make a really good mustard/cream/onion/sausage/chili flake sauce that is killer with pasta.

Kalyn, I think this could be a South Beach-friendly recipe, with the Dreamfields pasta you introduced me to?

Shawn, I love any kind of spicy pasta sauce -- well, maybe without the pancetta, but I can imagine how good that would be.

Patricia, we are very funny about pizza here in the Northeast!

Debbie, now I'll think "birdseed" every time I see the pepper flakes on a pizzeria table. Thanks -- I hadn't heard that before!

Freya, please do share the recipe (or, if you've posted about, share the link) -- it sounds to-die-for.

I'm always heavy-handed with pepper flakes. They are as much a staple in a lot of my cooking as salt is. In fact, you could probably cut back on the salt in a dish and not even notice.

When I was younger I never touched pepper or even consider using it. Now as I have gained more wisdom I realized if used properly it adds the proper zing to food.

After years of cooking Southern Italian dishes, none of which required this delightful addition, we here in the Northeast were finally intruced to them. Then, one of my daughtes fairly recently married a Texan. Okay - So I thought I knew something! His wonderful mother sent me all kinds of peppers from the south of Texas and expanded our delight even more. I would love that killer sauce posted by "Debbie" on June 1.

Susan, I use lots more pepper than salt in my cooking, too.

Veron, same here, I had no tolerance for hot food when I was younger. Then a trip to New Orleans changed my palate completely, and I came home craving hot and spicy food.

Bernadette, welcome to The Perfect Pantry. How lucky you are that you have a new source of chile peppers in your family!

Yikes! chilli flakes sprinkled on pizza, I'm a chilli wimp at the best of times! The 1/8 tspn sounds about right to me :)

Kelly-Jane, this is definitely a case where you have to build up your tolerance to the heat. I used to be a total wimp about spicy food; now I can't live without it, but it's taken years of "practice".

ohhh...pizza pepper. now i get it. because yes, red pepper flakes go atop all my pizzas... and everything else. spice is nice

I lOVE chilli flakes. Actually, I love any kind of chilli. I was so happy to discover puttanesca when I was in Italy because I was craving something spicy. Thanks for the recipe!

Nora, welcome to The Perfect Pantry. Italian cooks don't seem to use hot pepper often, but when they do, as in this recipe, it's just perfect.

I could not live without pepper flakes. Seriously. Okay, maybe I could, but I'd hate it!

I laughed at this one, Lydia! Jeff and I miss the "pizza pepper" here. I mean, who can enjoy pizza without the "pizza pepper"? I use red pepper flakes in so many dishes; they are an indispensable pantry item for me.

Susan, how you are surviving on the west coast without pizza pepper is beyond me! You really must teach them about the wonders of red pepper flakes on pizza...!

I am also a red pepper flake addict; one of my favourite dinners is vodka panchetta pasta loaded with these spicy flakes; it has so much flavour once you've cooked the sauce for awhile, and I always surprise guests with the heat in this unassuming dish!

ooo i love pasta puttanesca :) I also love red pepper flakes, unfortunately they cost a bit more over here so i try to make each jar laaaast :)

Trini Gourmet, red pepper flakes are delicious! It's great that there are good online sources now.

Hey, this is certainly a good recipe, but it's not vegetarian! It includes anchovies :-S

Julieta, you're right! I've fixed that in the recipe index. Thank you.

These are basic! I even gave my hot-dependent son a 12 oz jug of them. I've added them to the poll, too. Another vote for a veg version of the sauce, and olive free too. Easy to do, but that's not the same is it? Sometimes use soy sauce as an anchovy alternative.