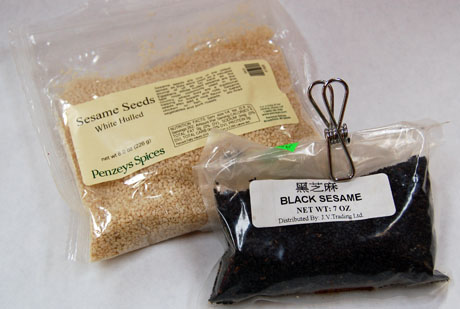 In one of my all-time favorite 1950s cartoons, "Ali Baba Bunny" (watch it here), the not-too-bright Hassan stands guard at the entrance to the cave where the evil Sultan has hidden his treasures. When he sees Bugs Bunny tunneling into the cave, Hassan desperately tries to remember the magic words to open the cave door.

And then, at last, "Open, sesame!" and the door swings up to reveal the riches inside. Like magic.

I loved "Ali Baba Bunny", though my toddler brain couldn't quite catch all of the words. So, whenever we pulled the car up to the front of our house, I would wave my arms around and proclaim, with a flourish:

And my father would get out of the car and open the garage door. Every time. Like magic.

As I sat down to write about the black (unhulled) and white (hulled) sesame seeds in The Perfect Pantry, I wondered about the origin of "Open, sesame!" It seems to date back to the tales of The Arabian Nights, and refers to the popping sound of the seeds inside a mature sesame pod, similar to the sound of a lock opening.

One of the world's oldest foods, the flowering sesame plant is thought to have originated in India. Today, China is the largest producer of sesame seeds (and the oil pressed from them), but sesame is cultivated throughout the Middle East, Africa and Asia, as well as in Texas, Louisiana, California and Arizona. (In the American South, sesame is called benne, and is popular in benne wafers.)

Sesame seeds — rich in minerals (especially magnesium and iron), vitamins and calcium — add both a nutty flavor and/or a bit of crunch to many dishes, including halvah, palitaw, jien duy, and tahini, as well as more familiar recipes like muffins. Sesame oil features in many Asian recipes, and it's often blended with lighter oils for frying tempura. Don't forget scallion bread, which gets its distinctive flavor not from scallions, but from the sesame oil blended into the dough. And nothing looks better on an inside-out roll than black sesame seeds, which I buy at my local Asian market where they are inexpensive and readily available.

Sesame seeds are prone to rancidity, so store them in the refrigerator or freezer.

A wonderful appetizer (sometimes spelled za'atar) served with olive oil and wedges of pita bread. Dip the bread in oil, and then in the zahtar. Recipe adapted from Recipes for an Arabian Night: Traditional Cooking from North Africa & the Middle East, by David Scott. Serves 6.

Put first four ingredients in a food processor, or use a mortar and pestle, and gently blend or crush the mixture to a dry crumble. (Do not process so long that it turns into a paste.) Season to taste with salt and pepper.

Hi Lydia, I'm the first to post today! Yay! :) Haha, I vaguely remember that epidsode of Bugs Bunny! I learned the origin of "Open, sesame" from a recipe book I recived for my birthday - the Middle Eastern Kitchen by Ghillie Basan. Cute, huh? Have yet to do up a recipe from the book, though.

Lydia- Who would have thought that the magic ping of the little seed would inspire so many great minds. I love your childhood story. And thanks for this recipe, it is fun to see the different variations of this. Yum!

Lydia, very interesting post. I love sesame seeds, and they are always in my pantry together with roasted sesame oil. :) And thanks for the Zahtar recipe. I really love this!

this would be a great appetizer. very unique. i'll have to have a dinner party so i can try this!

Well, like magic you've cleared up one mystery for me -- I never knew that black sesame seeds were black because they were unhulled -- fascinating information!

You know, I never would have thought sesame seeds were that nutritious. And Zahtar spelled any way is delicious! After my first taste of it at a restaurant called Open Sesame (no kidding)I've been hooked. Fun post!

Shilpa, that cookbook is new to me -- will have to check it out. I love middle eastern cooking.

Callipygia, there's a more common version of zahtar with sumac, but this one uses ingredients that are easier to find. Enjoy!

Anh, I tend to use the oil much more than the seeds, but the black seeds especially make a lovely addition to so many dishes.

Connie, invite me! This is a great party appetizer.

TW, I'm partial to the black seeds, because they look so dramatic when you sprinkle them on veggies or sushi rolls. I find them in my Asian grocery, and occasionally at the Indian market, too.

Susan, I didn't know about sesame's nutritional wallop either. A real bonus for something that tastes so good.

What a wonderful memory and tasty recipe!

I've eaten many things with sesame seeds but have never cooked with them.
So much to try, every time I come here there's something new I want to cook with. ;)

oh god i love za'atar! it makes the perfection of a warm pita even more perfect (if that's possible).

are there other uses for it, other than dipping I mean?

Thank you!! This reminds me that I need to order black sesame seeds. There is no substitute! Ahh-that recipe for zahtar has my mouth watering.

Sesame seeds are one of my favorites - they add so much to everything. Can't wait to try this recipe = sounds to die for...

Other than Lydia's asian market - can any recommend places to source sesame seeds?

Do the black ones taste much different or just look nicer?

Patricia, there is something elegant about the black seeds. And sometimes you can find "red" ones, too -- they're a deep reddish-brown color.

Ann, I went to a Lebanese festival once, and there were men toasting pitas on an overturned cast iron pot lid, and then smearing one side with the zahtar, and we would eat them like pizza. You could certainly use it as a filling for savory pastries, I think. Let me know if you invent something!

Sher, do you have a good source for the black seeds?

Link, see the previous comment. If anyone has a good online source, please leave it in the comments here. Thanks!

Freya, to me they taste the same -- and both taste better when lightly toasted in a dry frying pan.

Lydia, you amaze me. I never even thought about the origins of that expression. Just another wonderful tidbit from your blog.

There is a book here!

Lydia, I was filling out a Penzey order today and noticed that they have both white and black sesame seeds listed. Have you tried them??

Mimi, a book would be fun, yes?

Pauline, I haven't tried the Penzeys black sesame, but it's great to know they have it. Thanks!

One of my favorite ingredients - and I'm hooked on toasted sesame seed oil.