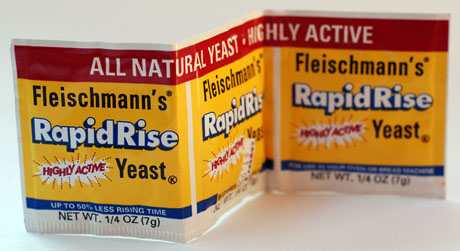 In a speeded-up world, where byways became highways and dial-up gave way to DSL, it's no surprise that yeast had to speed up, too.

In 1859, Louis Pasteur discovered the fermentation process by which yeast, a living microorganism, makes bread rise: (1) the yeast feeds on the starches in flour, producing carbon dioxide; (2) the carbon dioxide expands the flour's gluten proteins, which in turn (3) cause the dough, whose main ingredient is flour, to expand and rise.

Eight years later, brothers Charles and Max Fleischmann, who had immigrated to the US from Austria-Hungary, decided to market the breads they remembered from home, but knew they'd need a more reliable starter in order to mass produce their product. Together with James Gaff, who provided the financial backing, the brothers built a yeast plant in Cincinnati. In 1876, at the Philadelphia Centennial Exposition, they introduced fresh (compressed) yeast at their concession stand, called "The Vienna Bakery."

Fleischmann's developed active dry yeast during World War II, and it's the most popular form of yeast sold today. Dry yeast is fresh yeast that has been pressed and dried until the moisture content is approximately 8 percent, which makes the yeast dormant. Dry yeast has a much longer shelf life than fresh, and does not need to be refrigerated, making it ideal for the less-than-ideal circumstances of preparing meals for soldiers in the field.

In 1984, Fleischmann's introduced RapidRise, a highly active, finer grain of yeast that cuts the rising time by up to 50 percent, so that in most cases, dough will only need one rising. There is some loss of flavor and texture compared to results when yeast is allowed to develop on its natural timetable, but in most cases (especially if the dough is sweetened or flavored), the difference is acceptable.

Use dry active and RapidRise yeast interchangeably in most recipes. Although many recipes call for the yeast to be "proofed" (dissolved in warm water until it starts to get foamy and bubbly), this really isn't necessary as long as the yeast has not passed the expiration date marked on the packet.

If you've had a fear of yeast — will I kill it? will my bread collapse? — now's the time to give yeast a chance. You'll be enjoying your own home-baked cinnamon buns, pita bread, English muffins and coffee cake in no time.

Last December, Ellen, who runs our local yoga center, gave me a lovely gift of five small cookbooks published in 1927 by Woman's World Magazine Co. of Chicago. This recipe is from Cakes and Desserts: Being a collection of 150 tested recipes for home cookery, arranged by months. Olykoeks (usually seen as one word, though in the cookbook it's two words), meaning "oily cakes", are a Dutch creation, the precursor of our modern doughnut. Here's the original recipe; the notations in brackets are mine.

Scald the milk and cool it until lukewarm. Dissolve the yeast in a half cup of the milk, add a Tbsp of flour, and set aside in a warm place for 20 minutes. Meanwhile cream the shortening and sugar until light, add the eggs, well beaten, then the dissolved yeast the remaining milk (lukewarm) alternatively with the flour and salt sifted together. Knead to a light dough and set aside to rise for about four hours, or until doubled in bulk. Turn onto a well-floured board, roll out one-third inch thick, cut into rounds with a large cutter and put one or two raisins and a teaspoon of brown sugar into the center of each round. Wet the edges and gather the dough up round the filling, being careful to pinch the edges firmly together. Cover and set aside to rise until light —about three-quarters of an hour, then cook until golden brown in frying fat hot enough to brown a piece of bread in one minute, or if using a frying thermometer this should register 350 degrees. When cold, roll each Oly Koek in confectioner's sugar.

I think I saw those cakes mentioned on an episode of "The Secret Life Of." It was about donuts and I think they mentioned the dutch as well as the oly koeks. Now I have a recipe! :)

Here in Brazil fresh yeast is much more popular.
I started baking with active dry yeast less than a year ago - I must confess I prefer to work with the fresh one, but I always have a package of dry yeast in my cupboard for those sudden urges to bake. ;)

Ari, it's so much fun to look through these very old recipe books! Please let me know if you make the olykoeks.

Patricia, I am a lazy baker, when I bake at all, so I always use the dry yeast. And I'm an impatient baker, so I usually use the speeded-up yeast. I do believe the flavor develops better with slower rises (and more than one rise, often), but I'm always in too much of a hurry to wait for it!

I'm a lazy baker too, which is why I love baking bread. Bread is so forgiving. If you're hanging around at home anyway, why not get some loaves in a bowl to rise? If you're too busy in a few hours, just let it rise some more. Something comes up, put it in the fridge and get back to it next day. The only thing that kills yeast is heat. In the end, people are so impressed, and you have enough bread to last a few days....
The best book on bread that I know of is Carol Fields' The Italian Baker. May be out of print now. It was the first place I ever saw the word "ciabatta". Most doughs are kneaded in a mixer or food processor, and the doughs are much wetter than you may be used to.

Wow
five small cookbooks published in 1927 by Woman's World Magazine Co. of Chicago
what a treasure, you are one lucky girl.
Yeast is a wonder. Thanks for the great history.

I admit to having had fear of yeast (FOY) from time to time.

I love the smell of rising bread. And baking bread.

Give yeast a chance? I love it.

Fran, thanks for pointing out the Carol Fields book. I don't have that one in my collection (maybe you'll lend?). I think there is something enormously satisfying about the aroma of yeast breads rising on the countertop.

Tanna, the cookbooks were a lovely and unexpected gift. So many of the recipes need to be modernized for the way we cook today, but as food history, these little books are priceless.

Mimi, I remember the first time I made a yeast bread. I was terrified of killing the yeast! Now I don't give it a thought, in part because the dry active yeast is so consistent.

Another lovely post. I especially love the links to so many interesting recipes. Yeast is a staple in my pantry but tends to be used only for pizza dough. I need to use it more!

I don't know how I could make bread without it! ;D

Nupur, pizza dough is a great start. Does naan use a yeast dough? That's one of my favorite breads (garlic naan in particular).

I love this picture of yeast. I'm also very interested in food products and brands...interesting concept for a blog.

Thanks, Betty, and welcome to The Perfect Pantry.

I've been getting confused lately by yeast. It used to be it was just labeled active dry, then I saw labels for RapidRise, then Bread Machine (are they all interchangeable?). Then my supermarket moved it from the refrigerated section to the baking aisle. Granted, I'm easily confused.

Thanks for visiting my blog. Now I have another Boston blogger to add to my blogroll. (I used to work for the South End News, by the way.)

Tammy, I also wrote for the South End News, about 15 years ago -- in fact, it was my first gig as a food writer. All yeasts will work for all purposes; the difference is in how fast they activate. If you are patient, use any yeast. It is confusing, isn't it?