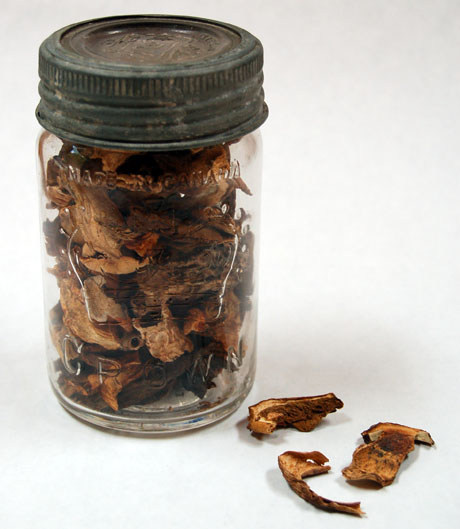 C'mon, you know you're thinking it.

How can something so ugly taste so good?

Dried mushrooms may not win any beauty contests, but I love their shriveled caps, curly stems, gritty texture, woodsy odor, and concentrated flavor.

Even if I didn't use them in my favorite risotto, I'd keep dried mushrooms in my pantry. Stored in an airtight container, they last longer than fresh (a year or more, but read on for true confessions), and are available year-round.

Reconstitute dried mushrooms by soaking them in a bowl of boiled or very hot tap water, for 20-30 minutes, depending on the thickness. The soaking liquid often gets added to the recipe; pour carefully, as grit from the mushrooms usually will congregate at the bottom.

When Julie of Kitchenography asked me recently about how price and quality do (or don't) correlate, I had to admit to my own puzzlement. She noted that "the imported Italian ones from my local ultra-cheap Italian deli are twice as expensive as the domestic ones from always-more-expensive Whole Foods — and even the inexpensive ones are expensive." I've been lucky over the past few years; I bought a huge bag, a couple of pounds, of dried cepes at a street market in France, and (true confession) had them for at least five years. Now I'm working down a precious supply of Oregon wild mushrooms that my friend Candy brought from a farmers market. Both the French and Oregon mushrooms were "fresh" from the farm, well trimmed and dried, and full of flavor.

Could it be that simple? Buy local. Buy from areas known for the best fresh mushrooms — France, Italy, the Pacific Northwest. China. Poland. How do you know what's good and a good value? The same way you learn about any food — taste, and find your own favorite.

Be sure you're buying large, identifiable slices or whole pieces. If you can't see the difference between a chanterelle and a porcini, you're not buying good quality mushrooms — you're buying kibble. (I'm not kidding; that's what it's called. Kibble is the dried equivalent of "stems and pieces" in a can.)

Most important, don't expect to buy sliced mushrooms at kibble prices. Online, I found Porcini Extra A, a very high quality, ranging from $6.80 for three ounces to $13 for four ounces, and from $41 to $49 per pound. Sounds expensive, but think about this: three ounces of dried mushrooms equals one pound of rehydrated or fresh mushrooms. A little does go a long way.

Here's another true confession: when cooked, most mushrooms taste the same to me. Except portobellos, which really are meatier. And shiitakes, which I just don't like. The texture may vary, but a cooked mushroom is a cooked mushroom. Same with dried mushrooms. Can you really tell the difference between a dried, reconstituted, minced and cooked porcini or cremini? Neither can I.

In most cases, you don't need to spend your money on the fanciest mushrooms. After all, why toss a $30 bottle of wine into a long-simmering stew, when a $10 bottle works just as well? Come to think of it, take the money you save by not buying exotic imported mushrooms, and treat yourself to a nice bottle of wine with this mushroom paté.

Adapted from the first edition of the Moosewood Cookbook, this paté is an unusual appetizer that can be dressed up or down. Bake it in an earthenware crock, as we do, or in a loaf pan. Serves 6-8.

In a glass measuring cup or bowl, heat 1 cup of water in a microwave on high heat until near to the boil, 2 minutes. Soak the dried mushrooms in the hot water, for at least 20 minutes.

Preheat oven to 400°F. In a large skillet, sauté the onions in butter over medium heat, until soft. Add the mushrooms, salt, mustard, dill, black pepper and cayenne. Remove dried mushrooms from the soaking liquid, and mince. Add to the pan. Stir and cook uncovered over medium heat for another 5 minutes. Add the wine, and cook another 5 minutes. Sprinkle in the wheat germ, stirring the mixture as you sprinkle. Stir and cook 1-2 minutes more (it will be quite thick), then remove from heat. Drop the cream cheese in small chunks into the mixture, and stir to incorporate.

Using an immersion blender, or in a food processor fitted with metal blade, puree the mixture. Transfer the puree to a large mixing bowl and whisk in the ricotta cheese.

Pour the mixture into a buttered (or sprayed with a nonstick spray like PAM) earthenware casserole, or into 2 loaf pans lined with wax paper and buttered. Sprinkle with paprika. Bake for 1-1/4 hours, uncovered. Chill thoroughly before serving. (Can be made ahead; store, covered, in the refrigerator.)

Love dried mushrooms. I mostly use them in soup, but this sounds fabulous.

I just used dried chantarrelles for a risotto I was making. They were very tasty. My favorite dried mushroom is still shitake which I get from the Asian food market. Funny thing is I like shitake dried more than fresh.

The porcinis at $6.80 on ounce are a bargain. Good source. I'm ordering!

Well I have to disagree a bit, I do find that a nice risotto made with good dried porcinis taste more that other mushrooms. But I do agree with the rest of what you say! It's a nice post!

Trader Joe's has fabulous dried mushrooms from Italy, and I had mushroom risotto on Sunday. Perfect for the onset of winter here, with our first cold rain. Instead of reconstituting in water, though, I use wine or chicken broth. Why dilute their flavor?

Dried shiitakes are also a good bargarin here, but I can't speak for the rest of the world.

Sounds great, now I have something to do with these 2 year old porcini's....

I keep dried shiitake mushrooms in the pantry. They are so convenient!

Veron, I agree. I like dried shiitakes more than fresh, too, but still they are not my favorites. Our local Asian market sells huge bags (maybe four pounds?) of shiitakes for less than $30. Talk about a bargain!

Luisa, the jar is from Canada, like my husband.

Julie, let us know what you think of the quality from that online source. I haven't used them.

Ilva, my own palate can't tell the difference, but I surely do love fresh porcini, when I'm lucky enough to get it!

Tana, good idea! Almost every recipe that uses dried mushrooms would benefit from wine or stock. I'll remember that.

Dried mushrooms are wonderful! The dried format is the only way I've ever found porcini and they are worth the price no matter the price.

I've made the Moosewood mushroom pate for years. More than 20 years ago I lived with my "other friend Lydia" and her husband Brian and that pate was one of our great favorites. When Brian turned 50 last year I made him his very own mushroom pate -- not to be shared at his birthday party -- and he's thanked me many times since.

A Pantry reader emailed to me earlier today:

There's a company called Fungus AmongUs (love the name) that sells dried mushrooms for incredible prices. It's meant for food service, but they will only charge shipping on orders under 5#. I bought a pound of organic dried porcini, Grade B, for $16.50. Grade A sliced is 22.35. Their website is: www.fungusamongus.com.

This recipe sounds amazing! I have one from Alton Brown that I have yet to try, think I'll make the Moosewood for the holidays. Thanks for the info on Fungus Among Us, I make have to call & see if I can stop by on my way to visit my parents in Port Townsend. I live in Eastern WA but am from Seattle and I can remember going Chanterelle hunting and coming home with 3 large paper bags of mushrooms. If I had only known what they went for I might not have given them away so readily!

Elaine, welcome to The Perfect Pantry. If you do stop by Fungus Among Us, please report!

I bought a jar of dried mushrooms at Costco (the wild mushroom co), but found that when I soaked and used them in a pasta recipe that most of them were very tough. Would this be a result of the product or my cooking? It was the first time I've tried the dried variety and I am not impressed. Any tips?

Pat, I also use the dried mushrooms from Costco and haven't had any problems with them? I'm definitely going to try the pate recipe this afternoon and I'm also going to try freezing and thawing some tomorrow. I'm single and I'd like to be able to take out a little bit now and then for work lunches. I'll let you know how it goes!

It worked! The recipe freezes beautifully. I halved the whole recipe but doubled the amount of dried mushrooms and used a whole Boursin instead of cream cheese. Baked it in a buttered metal loaf pan, popped it in the fridge and then sat it in hot water for a few seconds before turning it out onto the serving plate and smoothing with a knife. It is AWESOME! This is definitely going to be my new 'signature dish' for our work potluck dinners!