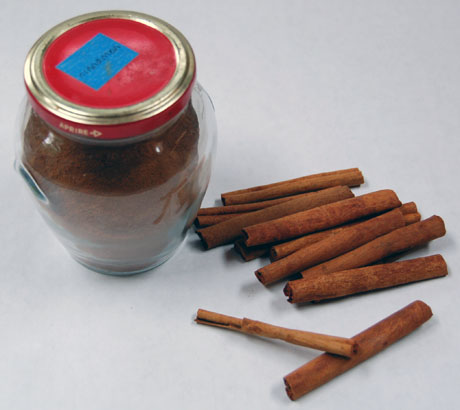 Often confused with cassia, which is darker in color and stronger in flavor, cinnamon comes in quills (what we call cinnamon sticks), one piece of bark rolled inside another. Most of what we buy in ground form in this country is actually cassia, either from China or Vietnam. In The Perfect Pantry, I have cinnamon sticks from Indonesia, and  cassia ground cinnamon from China. It's just a matter of personal taste. Buy your cinnamon from a good spice vendor like Penzeys, and you'll have a choice of cassia or cinnamon, in different pungencies, from different countries of origin.

I've always liked cinnamon, but now that there's talk of its beneficial effects on blood sugar, I like it even more. Funny, I was just putzing around with some cinnamon sticks for a photo, but the light was not right.

I love cinnamon. My day starts with cinnamon lightly sprinkled on oatmeal. I use it in savory dishes, in baking, in beverages....but the best is snickerdoodle cookies!

Thanks for the great cinnamon post! I order many spices from The Spice House and I always want to buy cinnamon from them but get overwhelmed by the choices! I just don't know which one to choose since I can't smell or taste them through the computer! So, I just keep using the cinnamon from my grocery store, which tastes great to me since I've never had anything else ;-)

Nicole, you'll be amazed at how different cinnamons taste so completely different! Some are spicy, some are sweet, and some are bland. I'd really recommend buying the smallest size of each type from somewhere like Penzeys or Spice House, and doing your own taste test.

Mimi and Marcia, don't know how I missed these comments so many months ago. Sorry about that!