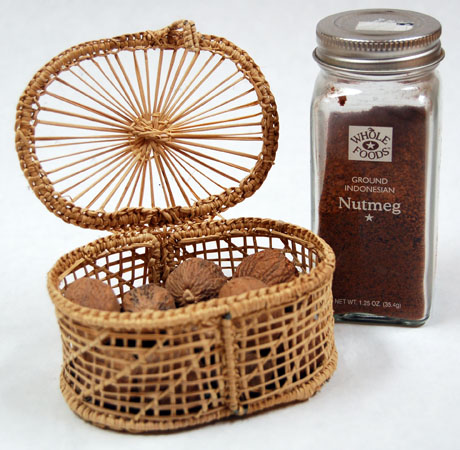 In his famous poem The Village Blacksmith, why didn't Henry Wadsworth Longfellow write "Under the spreading nutmeg tree?"

I think I know.

First, nutmeg does grow on a spreading evergreen tree — native not to New England, however, but to the Banda Islands of Indonesia (often called the Spice Islands). The Dutch, who claimed the islands in 1602, worked hard (and not very nicely) to maintain a monopoly on nutmeg, by soaking the seeds in lime to prevent them from growing. It was not smugglers, but fruit pigeons who scattered the unsoaked seeds on other islands. The Dutch sent out raiding parties to burn the trees to prevent the harvest and control the supply. The French eventually started a nutmeg plantation on Mauritius, and English traders brought nutmeg to Grenada, which is now the second-largest producer in the world.

Second, the seeds hang fairly low to the ground, easy to harvest by hand or with a long-handled wicker basket. So, setting up your smithy under the tree probably would guarantee that you'd get pelted with nutmegs!

When the fruit is ripe, the yellowish outer skin and mace are stripped off, and the seeds dry on trays for 6-8 weeks until the nutmeg rattles in its shell. The shells are cracked open, leaving the smooth, brown nutmeg.

Nutmeg tastes warm and bittersweet, and brings out the flavor in fruit cakes, egg and cheese dishes, stews, and cauliflower. I always add a small pinch to the ricotta mixture in my lasagna, and to sauteéd bitter greens like spinach and chard. It's also key in the spice blends of Indian, Arab, Moroccan and Tunisian cuisines, and combines well with cardamom, cinnamon, cloves, coriander, cumin, pepper, rosebuds, thyme, and mace — which is the outer coating of the nutmeg seed.

Penzeys sells both East Indian and West Indian (Grenadian) nutmeg. When using ground Grenadian nutmeg, use two-thirds of what the recipe calls for, as it is very potent with a high oil content. The whole nutmegs are very large, about 80 per pound, making them easy to hold and grate by hand. Ten seconds of rubbing on a small-holed grater will yield a half teaspoon of ground nutmeg.

Nutmeg may have magical powers, too. In the 16th Century, nutmeg oil was suggested as a kind of Viagra, to be dabbed you-know-where, and tucking a nutmeg into the left armpit before attending a social event was believed to attract admirers. In addition to healing properties, nutmeg is rumored to be both an aphrodisiac and a sedative. Go figure.

Here's a recipe from a little book, published in 1970, called Kids Cooking: A first cookbook for children. I found it in my cookbook library when I was searching for the honey cake recipe I'd planned to share with you. This was too charming to resist; here it is, word for word. Makes 8 four-ounce servings.

Here's what you need:

Here's what you do:

2. Cut square of cheese cloth, or clean white cloth, about 5 x 5 inches. Measure and place the following on cloth: cloves, nutmeg, and cinnamon sticks broken into smaller pieces. Make a bag by tying ends together with string.

3. Place saucepan over low heat, bring up to boiling point, add bag of spices, and simmer 5 to 10 minutes. Remove bag of spices.

Can't wait to test out the armpit theory! Great piece!

I love nutmeg. I, too, use it on sauted spinach and in eggnog drinks.

Hmmm, I didn't know about the other "treat" though...thanks for the knowing!

I grate nutmeg into a mixture of mashed carrots and turnips - a must-have vegetable dish at our family gatherings.

A few seconds of grating nutmeg over mushrooms brings out their flavor, too. Nutmeg is definitely one of my secret weapons!

After I finish imagining what 16th-century parties must have been like with people walking around holding a nutmeg close in their armpit, I think I'll need some punch!

Thanks for the recipe, and the history -- I love nutmeg --