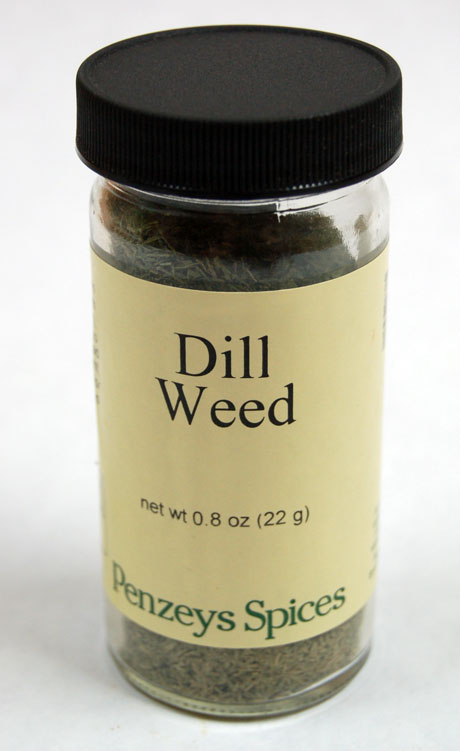 It's all that's left of a brutal head cold. My nose has stopped running, my appetite has returned, and now I want soup — something rich and hearty, but not dairy (it might curdle from all of the citrus I'm pouring down my sore throat).

I also have potatoes. I have leeks. I have chicken stock. And, though the dill in my herb garden has gone to seed, I have some lovely green dried dill weed on my spice rack.

Native to Central Asia, dill is a member of the parsley family. The fronds, which have a sweet taste, are popular in the cuisines of Scandinavia, Russia, Germany, Iran, and other Mediterranean countries. One of the only herbs used in the cooking of Baltic countries, dill very likely migrated north via medieval monks, who grew it for its medicinal properties. Without dill, there would be no gravlax, no borscht, and no dill pickles. Dill marries well with fish, beets, beans, rice, potatoes, zucchini, carrots and yogurt.

A related, less fragrant species of dill grows in India, where it's used to flavor lentil and bean dishes. If you're following an Indian recipe, you might need to reduce the amount of dill by 30-50%.

The Romans believed dill was an effective stimulant for gladiators. Maybe it's just what I need to get back on my feet.

You can enrich this soup with a bit of cream at the end, but you really don't need it. Serves 6-8.

Wash and slice leeks, and saute in a stockpot with celery in 2 Tbsp olive oil until limp but not brown. Add remaining ingredients except dill, pepper and croutons, and bring to a boil. Reduce heat to low-medium and cook until potatoes are tender. Puree entire potful with an immersion blender, or in a food processor (in batches, if necessary) and return to stockpot. Season generously with dill and black pepper, and salt if you really need it. Add more stock or water if the soup is too thick. Serve hot with garlic croutons. If you're going to serve this cold, remember that you will need a bit of extra seasoning and salt.

This recipe sounds great. It could also be used as a base for seafood chowder. I would add chopped clams or oysters or shrimp.

Penzeys is one line I CAN find in Wisconsin, Lydia — thank goodness for that. I shop there whenever I get to Madison, although I think there are now Penzeys that are closer to home.

Mimi, I love Penzeys. There's one in Boston now; it's great to be able to see and smell everything in the store, but mail order is what I use most of the time.

Ari, my voice is coming back (can you hear me??!). Welcome to The Perfect Pantry. I love your blog!