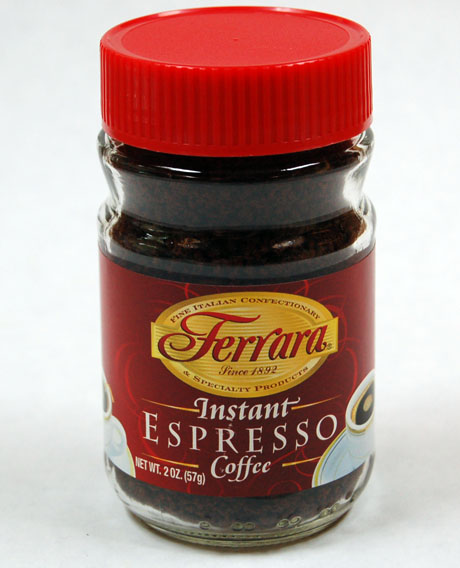 My parents drank instant coffee, and when I was growing up, so did I.

At some point in my junior high years, I received one share of Chock Full o'Nuts stock as a gift, so I announced that, as a loyal stockholder, I would ("henceforth," I'm sure I said) drink only Chock Full. They didn't make instant coffee, so my mother went right on buying whatever brand she usually bought, and my principles disintegrated after a day or two of coffee withdrawal.

My parents were easy-going about the coffee thing, and I can't remember an age when I didn't drink it. Black, no cream, no sugar. I was no coffee sissy back then, though I add a bit of skim milk now.

One summer, during college, I worked for a consulting firm in Manhattan. I commuted into the city from New Jersey with my friend Judy, and we walked every morning from the subway station to our Park Avenue office buildings. We'd grab a cup of brewed coffee and a muffin — the astronomical cost of which meant it would have to suffice for both breakfast and lunch — and that, believe it or not, was when I first realized that even the worst fresh-brewed coffee tastes better than the best instant coffee.

So, why do I keep instant in the pantry?

Coffee and chocolate have synergy; each enhances the flavor of the other. (Think mocha latte, or chocolate-covered coffee beans.) Incorporate a teaspoonful of instant coffee into chocolate cakes, candies, and cookies, and the chocolate flavor will pop.

Invented in 1901 by chemist Satori Kato of Chicago, instant coffee wasn't mass marketed until the Brazilian government approached Swiss conglomerate Nestlé about developing a dehydrated coffee that would have a longer shelf life and could be reconstituted with water. The result of this collaboration, Nescafé, was introduced on April 1, 1938, but with the outbreak of World War II, Nescafé didn't find much of a market in Europe. However, it was exported to the US, which helped re-launch the instant coffee in Europe by including it in American soldiers' meal rations. After the war, Nescafé's worldwide popularity grew, and by the 1950s and '60s, instant coffee became the norm.

Bakers have long known about the happy relationship between coffee and chocolate. The kitchen wizards at King Arthur Flour sell something they call baking espresso, $4.50 for two ounces, and their recipe for Chocolate-Brownie Torte looks absolutely outrageous.

Melt together the butter, 1 lb of chocolate chips, and the unsweetened chocolate in a medium bowl over simmering water. Allow to cool slightly. In a large bowl, stir (do not beat) together the eggs, coffee granules, vanilla, and sugar. Stir the warm chocolate mixture into the egg mixture and allow to cool to room temperature.

Bake for 20 minutes, then rap the baking sheet against the ovenn shelf to force the air to escape from between the pan and the brownie dough. Bake for about 15 minutes, until a toothpick comes out clean. Do not overbake! Allow to cool thoroughly, refrigerate, and cut into 20 large squares.

When I was little, I spent hours looking at my mother's Woman's Home Companion Cook Book (c. 1942).
Almost a thousand pages, the book is beautifully bound with stitching and lays flat. The pages are smooth to the touch. I'd spend hours looking at the photographs, especially the petit fours, delicately adorned with sugar forget-me-nots, roses, apple blossoms. At some point, for reasons I've forgotten, I decided to make angel food and sponge cakes.
Today,I still love this book and still make angel food and sponge cakes. Here is one that I particularly enjoy.

Beat egg whites until frothy; sprinkle salt and cream of tartar over the top and continue beating until stiff enough to form peaks but not dry. Gradually beat in half the sugar, sprinkling about 2 TBS at a time.

Beat egg yolks until thick and lemon-colored; add the rest of the sugar, the coffee and vanilla; continue beating until very smooth and thick. Gently fold in beaten egg whites; gradually fold in flour, sifting 1/4 cup at a time over the surface.

Turn into ungreased tube pan about 9 inches in diameter. BAke in moderate oven (325)F for about an hour; remove from oven. Invert pan; let cake stand in the inverted pan about 1 hour or until cooled.
Serve with whipped cream.

Marcia, thanks so much for sharing this recipe! It looks yummy and I will definitely try it.

Rupert, thanks for the Gil's memory. I do have his BBQ sauce recipe...and if any Gil's fans are reading this, I'm happy to share!

These brownies are incredible! I have tried many brownie recipes, and these are the best (and the most popular with people I serve them to). Interestingly, this recipe on the food network website (http://www.foodnetwork.com/food/recipes/recipe/0,1977,FOOD_9936_32314,00.html), calls for kosher salt. It also calls for 3 tablespoons of coffee. I actually cut back on the coffee a little when I made it, because I felt it was coming through too strongly.

As for iodized salt: my uncle is a chemist and a health nut - he does a lot of reading on the subject, and is very knowledgeable about vitamins, etc. He once saw uniodized salt in my house, and gave me an impassioned lecture about how important it is to have iodine in your diet, and how hard it is to get it in any other way. Since then, I have used iodized table salt except when a recipe specifically calls for something else.

Lydia, I love this site! I made "Buddy Ravioli" for a potluck this weekend, and it got rave reviews.

Judy, thanks so much for your comment. I think iodine deficiency is one of those conditions that seems very far away for most of us. Living near the sea in New England, we get lots of fish and vegetables that are grown in soil that was underwater, so we have a lot of iodine available in our diet. But iodine deficiency is a very real public health issue in many areas, and iodized salt is a brilliant way to combat it. Glad your Buddy Ravioli was a hit!