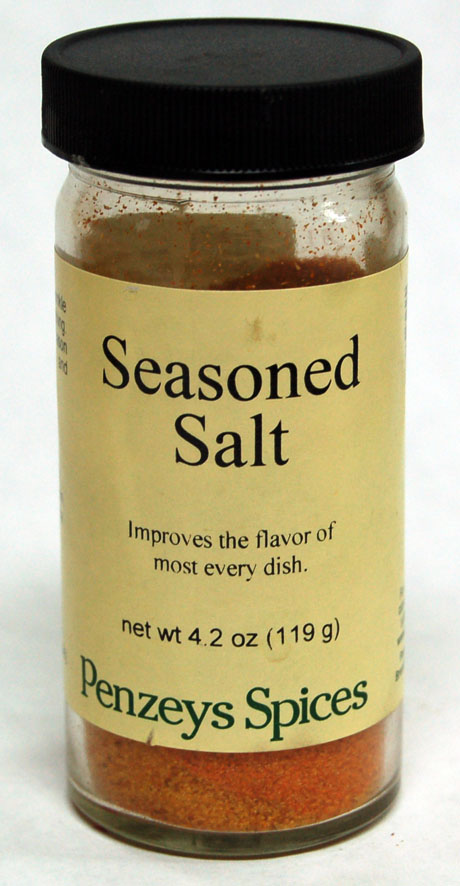 Little-known fact: My mother did not invent seasoned salt.

I always wondered about that. Seasoned salt — specifically Lawry's brand — was the main spice in her kitchen and she put it on everything: tuna steaks, beef steaks, lamb chops, burgers, chicken breasts. Seasoned salt livened up almost every meal, and I loved it. I still do.

In 1938, Lawrence L. Frank and Walter Van de Kamp co-founded the original Lawry's The Prime Rib restaurant in Beverly Hills, and created Lawry's seasoned salt to flavor their famous prime ribs of beef. For years I had Lawry's on my spice rack, until I discovered Penzeys Spices.

Penzeys' seasoned salt is hand-mixed from salt, sugar, paprika, onion, turmeric, garlic, and spice extractives (including oleoresin of paprika, black pepper, celery, rosemary and thyme). Oleoresin sounds chemical, but it's not; it's simply an oily extract. Lawry's Seasoned Salt has a few more ingredients — no MSG, but it does have cornstarch, an anti-caking phosphate, and soy lecithin.

Penzeys now has a seasoned sea salt called 4/S (special seasoned sea salt), made with the same ingredients as the regular, but substituting coarse sea salt and extra bold black pepper for the standard S&P. I love the fresh flavor and the fact that there's more going on than just salt; you actually can taste the pepper, onion and other spices.

The words "seasoned salt" conjure up two taste memories for me: my grandmother's beef brisket (which gets rubbed in seasoned salt before browning and braising), and the lamb chops my dad used to cook on the grill. Reason enough to give this spice blend a place of honor in my kitchen.

Preheat oven to 450°F. Cut each potato lengthwise into 8 wedges; toss in bowl with butter, oil and seasoned salt. Arrange in single layer on 2 baking sheets. Bake until tender and golden, turning potatoes and rotating sheets halfway through baking, about 45 minutes. Serve immediately.

Well Lydia, you have convinced me to buy some of that great sounding salt! I have been a fan of the Lawry's Salt forever, and, will most likely still use it. I have a tendacy to use sometimes up to four types of salt at one on different dishes. I would use the Lawry's Salt for sauted rabi, steamed and sauted artichokes, etc. I find using a sea salt, kosher salt, garlic salt and Lawry salt is a nice blend of flavors in dishes that need a lot of salt to taste good (a pinch or so of each). I also use a steak seasoning on a lot of dishes, including soups. I put it on roasted veggies, in pasta dishes, in egg dishes such as a fritta, anything that needs a boost of corse flavoring. Here is my steamed and sauted artichoke dish:

4 artichokes, cut stems, trim leaves and cut off tops, cut in half then, take out the choke - rinse in lemon and water...
1 can of achoivies in oil
extra vigrin olive oil
red crushed pepper, fresh black pepper
Lawry Salt or steak seasoning (Spice Island has a good one)or garlic salt
4 cloves of minced garlic
1 small can of sliced black olives with brine or 1 cup of chicken broth (low sodium/fat)
fresh parsley (lots) 1 cup
capers if desired..not many, a teaspoon full

In a large saute pan, heat up on med-high, add some oil and the artichokes with 4 cloves of minced garlic and saute until tender.
Saute in pan w/olives in brin or chicken broth. Cover and steam 30 minutes or so until tender.
Add spices to taste...salt's
Add fresh parsley and saute until fork tender.

This is on of the variations of my artichokes...time is of the essence right now, so another day I will forward the stuffed artichokes...

Ps...I don't have spell check on this site...too bad for you readers!