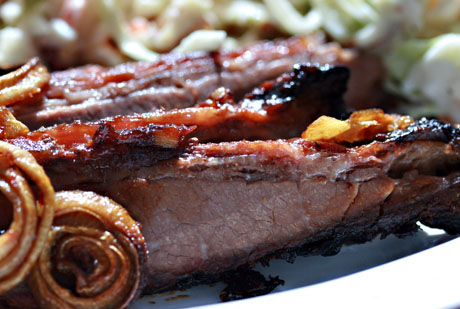 Question: Why is black pepper worth its weight in gold?

"The history of the spice trade is essentially about the quest for pepper," Jill Norman answers in Herbs & Spices: The Cook's Reference. "Peppercorns and long pepper from India's Malabar coast reached Europe at least 3,000 years ago; trade routes were fiercely protected, empires were built and destroyed because of it. In 408 AD the Goths demanded pepper as part of their tribute when they laid siege to Rome; later, pepper was traded ounce for ounce for gold, and used as currency to pay rents, dowries, and taxes." 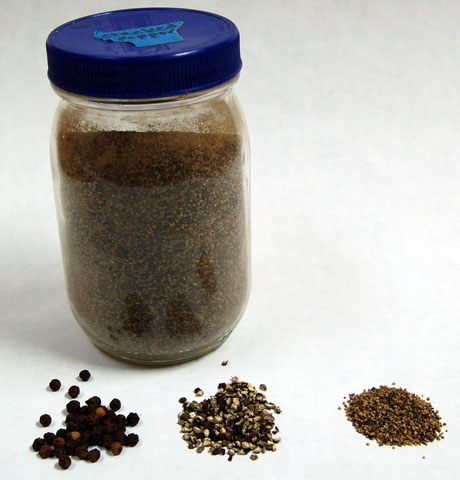 Today pepper is, in volume and value, the most important spice in the world. India and Malaysia produce the best black pepper varieties: Malabar, Tellicherry, and Sarawak. From Indonesia we get Muntok, considered the highest-grade white pepper. Brazil and Vietnam also contribute to the world supply.

More than any other spice in my kitchen, black pepper gets a workout every time I cook. (In the photo above, you'll see the three black peppers in my pantry: whole Tellicherry peppercorns, spicy cracked Sarawak, and coarse-ground Tellicherry).

For years I bought into the "fresh ground" way of life. I tried one pepper mill after another — the pretty ones that don't grind, the ugly ones that do, and the French ones that, like all things French, manage to look impossibly beautiful while getting the job done. In the end, I chose the affordable Oxo pepper mill with a clear glass reservoir and adjustable grind (Oxo has stopped making these, though you can find some on the market with different contents). I have several — one for black pepper, one for white, one for green — so I can see easily which is which, and which needs refilling.

A few years ago I discovered Penzeys coarse-ground Tellicherry pepper. I buy 8-ounce bags for less than $6.00, and keep a working supply in a lovely recycled mayo jar. With four cooking groups and countless friends and family using the pantry, that jar empties every few weeks.

And, honestly, I love the look of coarse-ground pepper in my food.

This recipe came to me from my friend Mary's sister Peg a decade ago. I think it's based on a Lee Bailey recipe, but to me it's always been Peggy's incredibly delicious, crowd-pleasing, never-fail, knock-your-socks-off brisket. Serves 12, at least, and can be made ahead.

Preheat oven to 350°F. Trim brisket and rub all over with the garlic. Combine celery seeds, pepper, ginger and bay leaves, then rub into all sides of the brisket. Mix the tomato paste, soy, Worcestershire and sugar, and smear this all over the meat. Score the fat side of the brisket and place the onions on top, and place the meat in a heavy nonstick high-sided roasting pan. Cover tightly with aluminum foil. Cook for 4 hours.

Open the foil to expose the onion-covered top, and cook for another hour. Remove meat to a heated plate and keep warm. Place the roasting pan on the stovetop over medium-high heat, and degrease sauce with some beer until the sauce has reduced to a pleasant consistency. [Note: Improves if cooked a day ahead; refrigerate in the sauce, and slice cold.] Serve at room temp or reheat.

I still like to grind the pepper as I'm using it in a recipe or on the plate. Unfortunately, I broke my good pepper mill and the "cheapy" one I'm using leaves much to be desired. I'm looking for a one-handed one or battery operated one that has a good choice of grinds. I'll let you know when I find one.

Thanks, Pauline. Check on the Cooks Illustrated site; I seem to remember they did a comparison of pepper grinders a while back.

Now, now....this sounds like excellant brisket, but you can't have BBQ without a fire, preferrably mesquite, at least pecan or oak.

Your basic rub sounds OK, just reserve the liquids to make a sauce with for serving.

Cook it over indirect heat (no more than 225 deg) for about 8-12 hrs. It'll look pretty hopeless in about 6 hrs, but keep the faith, it'll start to look right at about 8 hrs. When done, a slice should have the classic pink perimeter (from smoking, not being rare) and grey/brown center found in BBQ brisket.
My basic rub is salt, coarse black pepper, garlic & onion pwdr, and sometimes some chili pwdr.
Don't get me wrong, I've wrapped brisket in foil along with potatoes, onion , bacon, butter, and various meat marinades and cooked them in 2 hrs on a Weber grill. It's so good it'll make you slap your daddy, but it ain't BBQ. Think I'll try your recipe because it too sounds really good.